Climate-related financial risks are the financial risks linked to climate change. These are typically split into two broad categories: physical and transition risks. This primer looks at physical risks, which arise from the physical impacts that stem from a changing climate.

What are physical climate risks and how are they changing?

The Intergovernmental Panel on Climate Change (IPCC) is the most authoritative source on the science behind climate change. In August 2021, the IPCC published the first part of its Sixth Assessment, providing the most up to date scientific understanding of the climate system and climate change. Its Summary for Policy Makers provides a useful overview of the current scientific understanding about the changing climate. (For background on IPCC, see A Short History of Climate Regulations and the Outlook on What is to Come). 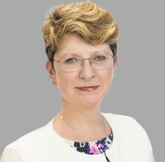 The IPCC notes how it is “unequivocal” that human action has warmed the atmosphere, ocean and land. This warming is caused by the release of greenhouse gases (GHG) into the atmosphere. The most prevalent of these gases is carbon dioxide (CO2), associated with burning fossil fuels, industrial processes, forestry and other land uses. But other gases — such as methane (CH4) and nitrous oxide (N2O) — are also contributing.

The IPCC notes many records are being set, including:

Global warming is already producing many physical impacts, and they are expected to get worse. Examples are more frequent and intense heat extremes, droughts in some regions, heavy precipitation and reductions in Arctic sea ice, snow cover and permafrost.

The fact that the UN Secretary-General António Guterres described the report as ‘code red’ for humanity is an indication of just how serious the situation is.

The physical impacts from climate change will feed through to an economy in a variety of ways, including damages to physical assets through extreme weather, reduced agricultural productivity, heat-related illnesses and death and loss of biodiversity.

It’s helpful to distinguish between the two main types of physical risks, namely acute or chronic:

As with transition risk, the hazards (physical events such as storms and heatwaves) will not translate into risks unless there is an exposure and vulnerability. Exposure here is used in the traditional sense of assets or firms that are located in a place that is susceptible to being impacted by these hazards, for example a manufacturing plant built in a low-lying coastal zone.

Vulnerability refers to a propensity to be adversely affected by a particular risk driver, which could arise from a lack of capacity to adapt. For a physical asset, vulnerability will depend on the way that it has been built, for example, the material used, its elevation and any adaptation undertaken (such as insulation, water pumps or air conditioning). Two properties located on the same road may have very different vulnerabilities simply because of the way they have been constructed or adapted.

Firms can be exposed to physical risks either directly or indirectly. For example, a factory might be directly impacted by being in an area that is becoming increasingly prone to flooding. But even if the factory itself is well protected from floods and other hazards, it could be indirectly impacted if its supply chain is affected.

The non-linear and cascading nature of physical risks

One of the complexities with calculating impacts is that they are very likely to be non-linear, as hazards reach thresholds beyond which the various systems – be they human, ecological or man-made – start to break down or stop functioning efficiently.

Another complication stems from the cascading nature of risks from climate change. Figure 1 gives an overview of how different climate hazards might feed through to various impacts of concern, leading to a range of social, economic and financial consequences. For example, major heatwaves might lead to crop failure, creating food crises and social unrest, potentially leading to armed conflict and destabilization of markets.

How will physical risks evolve?

A key factor influencing how physical risks evolve is the path of future emissions. Figure 2 gives the pathways for CO2 across five pathways used in the current IPCC analysis. These range from very low emissions (SSP-1.9) to intermediate (SSP2- 4.5) to very high (SSP-8.5). 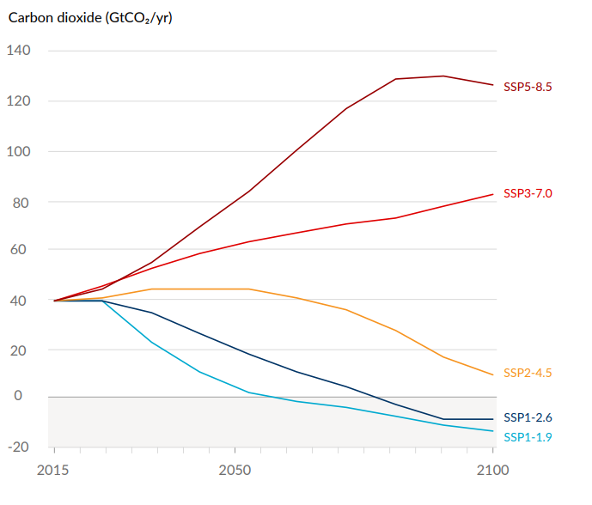 Source: IPCC, 2021: Summary for Policymakers in Climate Change 2021: The Physical Science Basis. Contribution of Working Group I to the Sixth Assessment Report of the Intergovernmental Panel on Climate Change

But how does this feed through to changes in temperatures? Because of lags in the climate system, historic emissions will cause much of the global warming for the next few decades. This can be seen in Figure 3, which shows changes in global surface temperature for selected 20-year time periods in the near, medium, and long term for these five different emissions scenarios. All the bars are a similar height in the near term (2021 – 2040) but vary by up to 4oC in the long term (2061 to 2100). In other words, it takes decades for there to be a discernible difference in the trends in global warming across the varying scenarios. But the future path of physical risks depends critically on the actions we take over the next decade or so.

Note: Temperature differences (in °C) are relative to the average global surface temperature of the period 1850–1900.

Impacts of different degrees of warming

Chatham House’s Climate Change Risk Assessment 2021 provides a useful overview of the most significant global and regional direct impacts of climate change under the Representative Concentration Pathway (RCP) 4.5 scenario, which was used by the IPCC in its previous report. For example, by the 2030s, more than 400 million people globally each year are likely to be exposed to temperatures exceeding the workability threshold. And it’s likely that more than 10 million people per year will be exposed to heat stress exceeding the survivability threshold. By 2040, 3.9 billion people are likely to experience major heatwaves, 12 times more than the historic average.

There is considerable uncertainty about the impact on sea level rises, but the central estimate suggests that by 2100 nearly 200 million people worldwide will be living below the 100-year flood level.

Which scenarios are firms using to assess physical risk?

The GARP Risk Institute conducted a deep dive on climate scenario analysis practices in financial firms as part of the Climate Financial Risk Forum‘s 2021 outputs. This showed that firms use different scenarios to analyze different risks. The most popular scenario to explore physical risks was the RCP 8.5, which corresponds to a high emissions/high physical risks scenario (see Figure 4). So that’s a useful scenario to start with to explore potential physical risk impacts on your balance sheet. 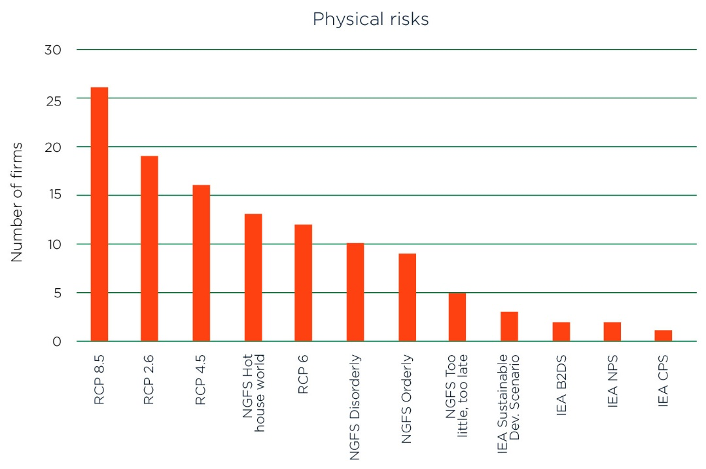 A need for urgent action

Physical risk is not as high a priority as transition risk for many financial firms according to GARP’s Third Annual Climate Risk Management Survey. Around a third of boards have discussed the physical risk affecting their own operations, and even fewer have seen papers on the physical risks affecting their counterparties or investments. This is perhaps understandable given the relative timeframes involved, but it is unwise to ignore this subject completely. Physical risks are happening now and will only increase over coming decades. For long-term strategy and projects in particular, physical risk must be embedded into the risk assessments of any planning and investments.

But the most urgent action needed from financial institutions is to finance cutting emissions as soon as possible to prevent the accumulation of devastating systemic risks over coming decades.

For more insights on physical risk, please tune in to these podcasts and webcast:

Jo Paisley, President of the GARP Risk Institute (GRI), has worked on a variety of risk areas at GRI, including stress testing, operational resilience, model risk management and climate risk. Her career prior to joining GARP spanned public and private sectors, including working as the Director of the Supervisory Risk Specialist Division within the Prudential Regulation Authority and as Global Head of Stress Testing at HSBC.