Risk managers and climate scientists share a fundamental challenge: How to identify, weigh, and process a dizzying mix of signals to better model a range of possible future outcomes. Accordingly, the complex mathematical methods underlying both disciplines tend to advance slowly. It’s rare to see big improvements in the precision of their forecasts.

Yet this past July, climate scientists achieved just such a leap, with the publication of an outlook — conducted under the World Climate Research Programme (WCRP) and published in the Review of Geophysics — for global warming that, for the first time, merges three disparate data sets and methodologies. Important as the technical improvements are, however, the conclusions have broader bearing for both climate science and risk managers.

The improved model predicts more warming in a world where CO2 levels hit twice their pre-industrial level, a threshold anticipated to hit mid-century, rather than closer to 2100. The findings thus boost the probability of serious climate impacts to energy operations, financial markets, human health, and the environment.

How much more warming by when?

To better understand the recalibration of this forecast, it’s helpful to revisit its predecessor. Since a landmark study published in 1979, scientists have expressed their outlook for temperature increase as a range — given a doubling of CO2 to pre-industrial levels — from a lower bound of 1.5°C to an upper limit of 4.5°C. From regulators to boardroom executives, planners have used this range as a reference for policy and business strategy over the past 40-odd years.

The new study narrows the bounds of this forecast range. It raises the lower limit of the estimate to 2.6°C while slightly reducing the upper bound, to 3.9°C by 2100. (See chart, via Science.) 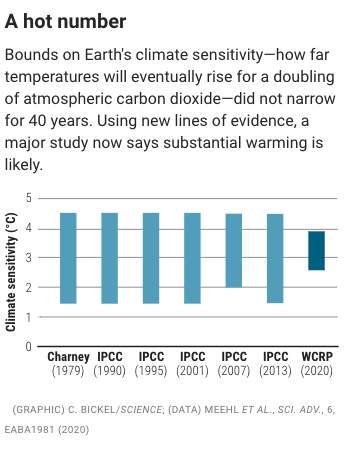 “Narrowing the uncertainty is relevant not only for climate science but also for society that is responsible for solid decision making,” said Masahiro Watanabe, a professor at the University of Tokyo’s atmosphere and ocean research institute and one of the report’s authors, in an interview with The New York Times.

The study underscores a rising sense of certainty that the rate of warming is increasing. Today, global temperatures are already 1.2°C higher than their pre-industrial average.

The goal of the 1.5°C target was enshrined in the 2015 Paris climate accords, and has galvanized policy, business and public attention in part because it also represents what many scientists believe may be a critical threshold, a temperature gain beyond which the destabilizing effects of warming could accelerate sharply.

How is this study different?

The oldest numbers were taken from records of prehistoric temperatures preserved in sediment layers and tree rings. The next youngest come from direct measurement of temperatures taken since the start of the industrial revolution in the 1800s. And the most recent set of inputs was drawn from satellite measurements and computer models beginning in the 1980s.

On their own, none of these data sets could help refine the range of the temperature outlook. Simply synthesizing the disparate data sets was a challenge without precedent. The researchers were also able to enhance the precision of how feedback loops shape the outlook — for instance, how the loss of highly reflective white sea ice accelerates how quickly polar waters absorb heat. By merging and refining each vintage of findings, the meta-analysis delivered precision greater than the sum of its parts.

What’s more, the data proved to be more convergent than researchers anticipated. Co-author Gabriele Hegerl, a professor of climate system science at the University of Edinburgh, told The New York Times that she was surprised by the way the models converged. “We don’t expect these three lines of evidence to agree completely,” she said, but they did.

Data from the refined forecast will be used by the U.N.’s Intergovernmental Panel on Climate Change (IPCC) for its next major assessment in 2021 or 2022, Science magazine reports. From there, the data is likely to ripple into other national, academic, and private-sector models and inform projections for sea-level rise, economic damage, and other climate impacts.

When offered equally probable good and bad outcomes, most folks tend to be too optimistic. Human nature is biased to think the good outcome is more likely; conversely, people tend to spend too little time thinking through the implications of the bad outcome. Put plainly, a lot of us tend to translate uncertainty as things should be okay.

Yet as risk professionals know all too well, uncertainty is always a double-edged sword. In the realm of climate change the risks vary from less severe and arriving more slowly to more intense and happening faster. To date, evidence is mounting that the outlook is tilted towards the bad, with disruptive changes happening faster and sooner than prior models anticipated. This has much to do with the complexity of the science behind modeling planet-sized physical systems. It also stems from science’s conservative culture: scientists tend to err on the side of caution when forecasting.

In the here and now, energy risk planners are already reckoning with climate phenomenon that are hitting energy markets and operations harder and faster than anticipated:

For business leaders, the challenge is growing more urgent. While the new scientific study shifts up the long-term temperature forecast, it remains in many ways a pure abstraction — an estimate off in the future.

And for risk managers, the challenge is to take these multi-decadal temperature forecasts and translate them into material risk recommendations. How will another degree — or more — of warming change business conditions? Over the next five years, the next decade, or by mid-century? Where and in what ways could the increase manifest?