The GARP Risk Institute’s latest deep dive on climate scenario analysis practices in financial firms was recently published on December 9 as part of the Climate Financial Risk Forum’s (CFRF) 2022 outputs, which are all accessible via this link.

This publication offers an update to last year’s CFRF Scenario Analysis Implementation Guide, with a focus on the maturity of fast-evolving climate scenario analysis practices in financial firms.

GARP has been secretariat for the CFRF’s working group on climate scenario analysis since the Forum was established in 2019 by the UK’s Financial Conduct Authority (FCA) and the Prudential Regulation Authority (PRA). The CFRF aims to build capacity and share best practice across financial regulators and industry, with guides written by industry for industry.

If you would like to hear more about some of this year’s CFRF outputs, you can also listen to a podcast we recently recorded discussing CFRF’s Litigation Risk and Physical Risk Underwriting Guides.

Climate scenario analysis has been greatly influenced by regulation and the regulatory agenda over the past year, and is now in wide use at financial firms. Indeed, firms are employing it more frequently to assess the financial impacts of climate change and to improve risk management and disclosure, but there is still more work to be done – particularly with respect to firms taking action in response to scenario analysis.

This chapter presents results of a deep dive on the maturity of fast-evolving climate scenario analysis practices in financial firms, offering an update on the analysis published in last year’s CFRF Scenario Analysis Implementation Guide. It sheds light on emerging practices and gives firms a tool for measuring the maturity of their own approaches relative to their peers.

The analysis presented here is based on the results from GARP’s Fourth Climate Risk Management Survey (“GARP Annual Survey”) undertaken in Q2 2022. The 2022 GARP Annual Survey comprised 62 firms, which collectively had around USD43 trillion of assets on their balance sheets, managed assets of close to USD46 trillion, and accounted for about USD3.2 trillion in market capitalization.

Just over 80% (51) of these 62 firms have undertaken climate scenario analysis. The analysis presented in this deep dive focuses on the practices at these 51 firms; any percentages presented are of a total population of 51 firms, unless otherwise stated.

Any year-on-year comparisons will reflect a mix of evolving practices and changes in the population of participating firms. Fortunately, the populations in the two years of deep dives are similar in terms of the proportions of firm types (around 65% banks, 35% asset managers and insurers) and their geographic footprint. Seventy-three percent of the firms (37 of 51) in this year’s deep dive, moreover, were in last year’s.

The rising influence of the regulator is evident throughout this year’s deep dive, but we also saw interesting developments across areas like motivation, outcome, and scope. Let’s now take a look at the most important findings.

The Use of Climate Scenario Analysis in Financial Firms

This year, a higher proportion of firms have undertaken scenario analysis more recently compared with the 2021 sample, with 75% applying it within the last year (Figure 1).

We asked firms whether their use of scenario analysis was regular or ad hoc. In a reversal from last year, more firms are now using it on an ad hoc basis (nearly 70%) and fewer (55%) are deploying it regularly (Figure 2). This trend may reflect in part the growing number of regulatory climate scenario analysis exercises, which firms may see as “ad hoc.”

As we noted last year, “regularly” does not necessarily translate to a high frequency of analysis. However, given that all the firms in this year’s sample have undertaken the analysis within the last two years, it is a good indication that regularly implies a reasonable frequency.

Figure 2: Use of Climate Scenario Analysis

There has been a marginal increase in the percentage of firms evaluating whether to take action (Figure 2). But that evaluation is not necessarily flowing through to firms actually taking action, with a smaller percentage of the firms are doing so than last year (Figure 3). Similar to last year’s survey, improving disclosure and changing risk management were the most popular actions resulting from scenario analysis in 2022.

Figure 3: Actions Taken as a Result of Using Scenario Analysis 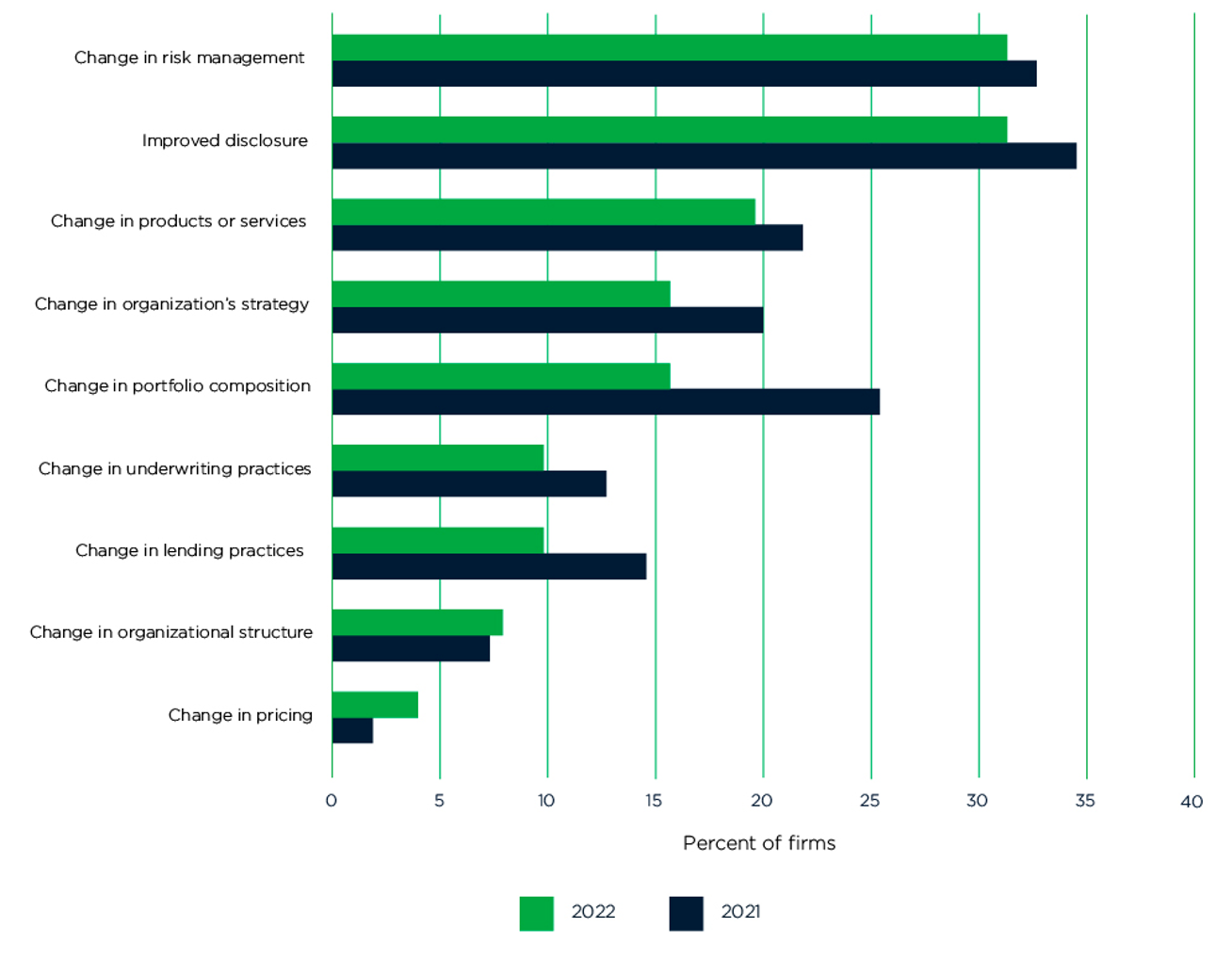 There are a range of reasons that firms choose to undertake climate scenario analysis (Figure 4). As in last year’s survey, the most popular reasons were: (1) assessing the financial impacts of climate change (94%); and (2) risk identification (84%). This year, moreover, there has been a marked increase in the percentage of firms being required to undertake scenario analysis for regulatory purposes, rising from 44% to 65%.

Firms also use scenario analysis to support their strategy development and to feed into external disclosures. Though it still lags many of the other reasons, assessing the alignment of a portfolio to a particular temperature pathway (including net zero) is another increasingly popular reason for undertaking scenario analysis. 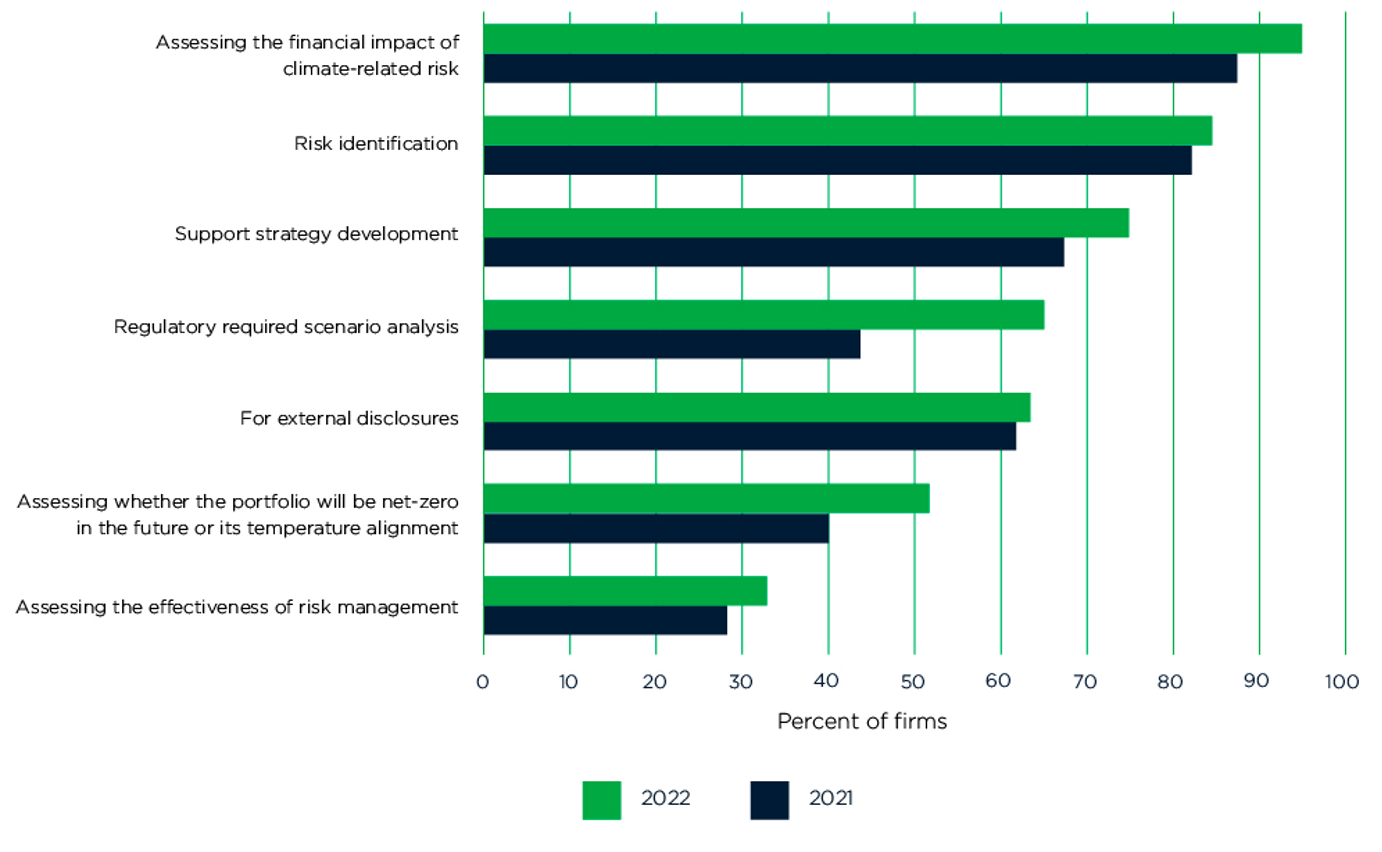 Relative prioritization is confirmed in Figure 5, which shows that firms are much more likely to use scenario analysis to assess physical or transition risk than to assess portfolio alignment. Physical risk (assessed by 98% of firms) was a slightly more popular focus this year than transition risk (94%), while portfolio alignment was the focus in 55% of all analyses.

Figure 6 shows that the most popular time horizon for the scenarios used is 10 to 30 years, as it was in 2021. The longer time scales tend to be needed more for physical risk assessments than for transition risk.

Firms can choose reference scenarios provided by third parties or develop bespoke ones to suit their particular business. Figure 7 shows the scenario providers most commonly used in 2022 and 2021. The most striking difference is the increase in the NGFS scenarios, which proved most popular in 2022 – accounting for nearly 40% of usage. This finding is consistent with the rise in the regulatory focus of climate scenario analysis. (For more details, see, in the Annex, “A Primer on Scenario Providers.”)

Note: Figures expressed as a proportion of the scenarios used. SSPs are those published in the AR6 (see Annex)

A smaller percentage of firms use scenario analysis for assessing alignment to net-zero or a particular temperature trajectory. The most popular scenarios for this purpose are the IEA Sustainable Development (SDS) scenario, followed by the NGFS orderly and disorderly scenarios. 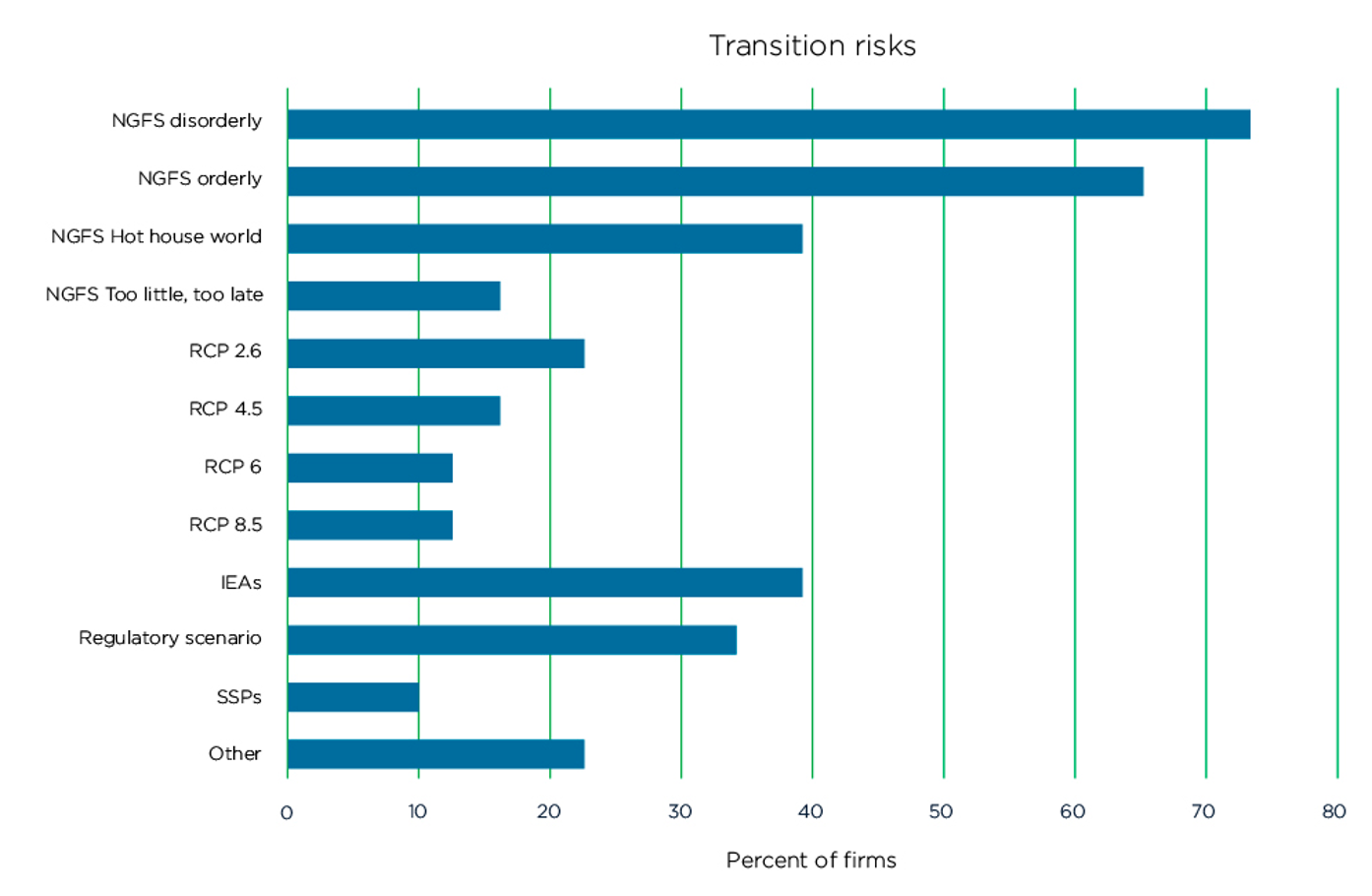 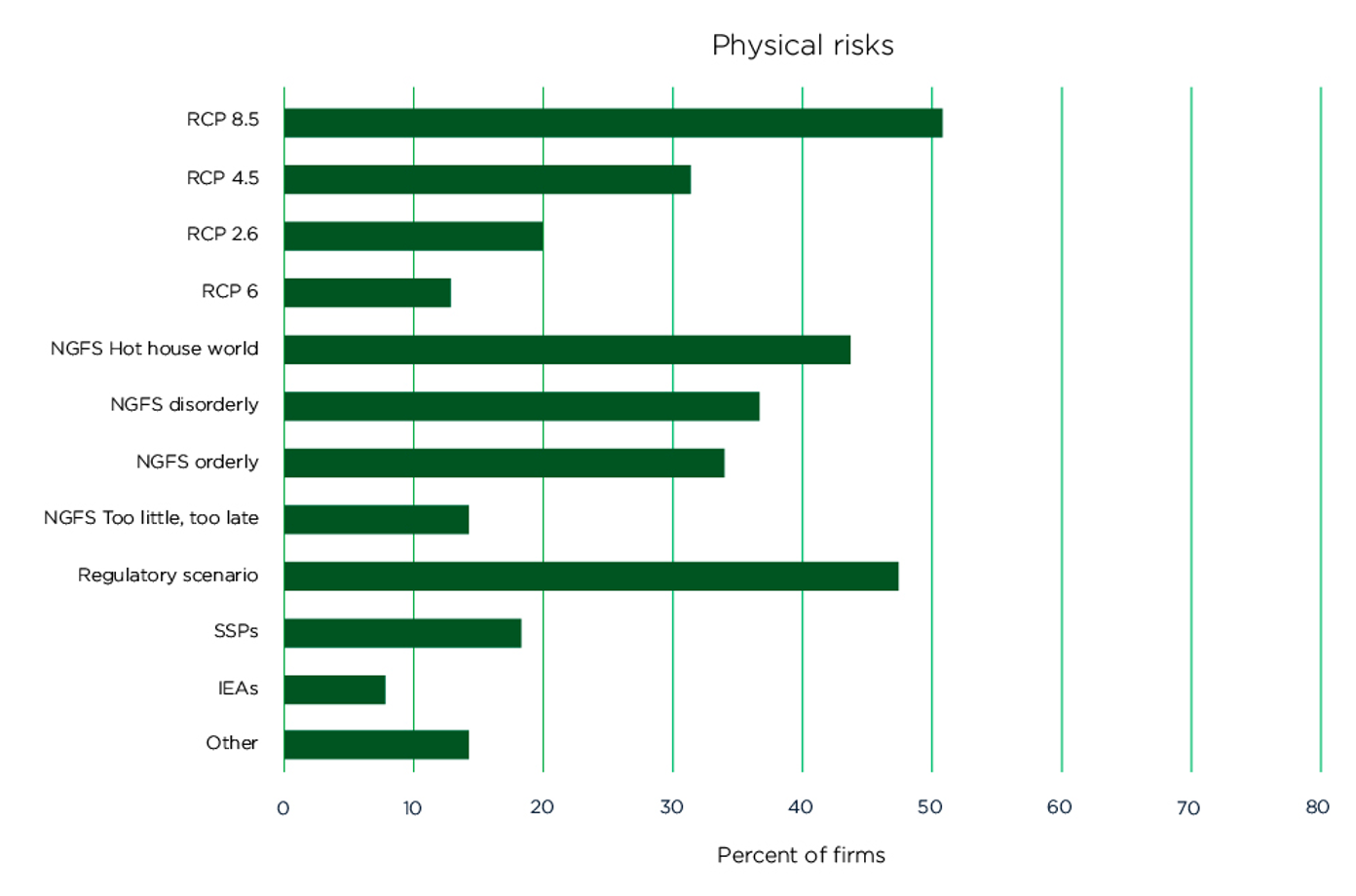 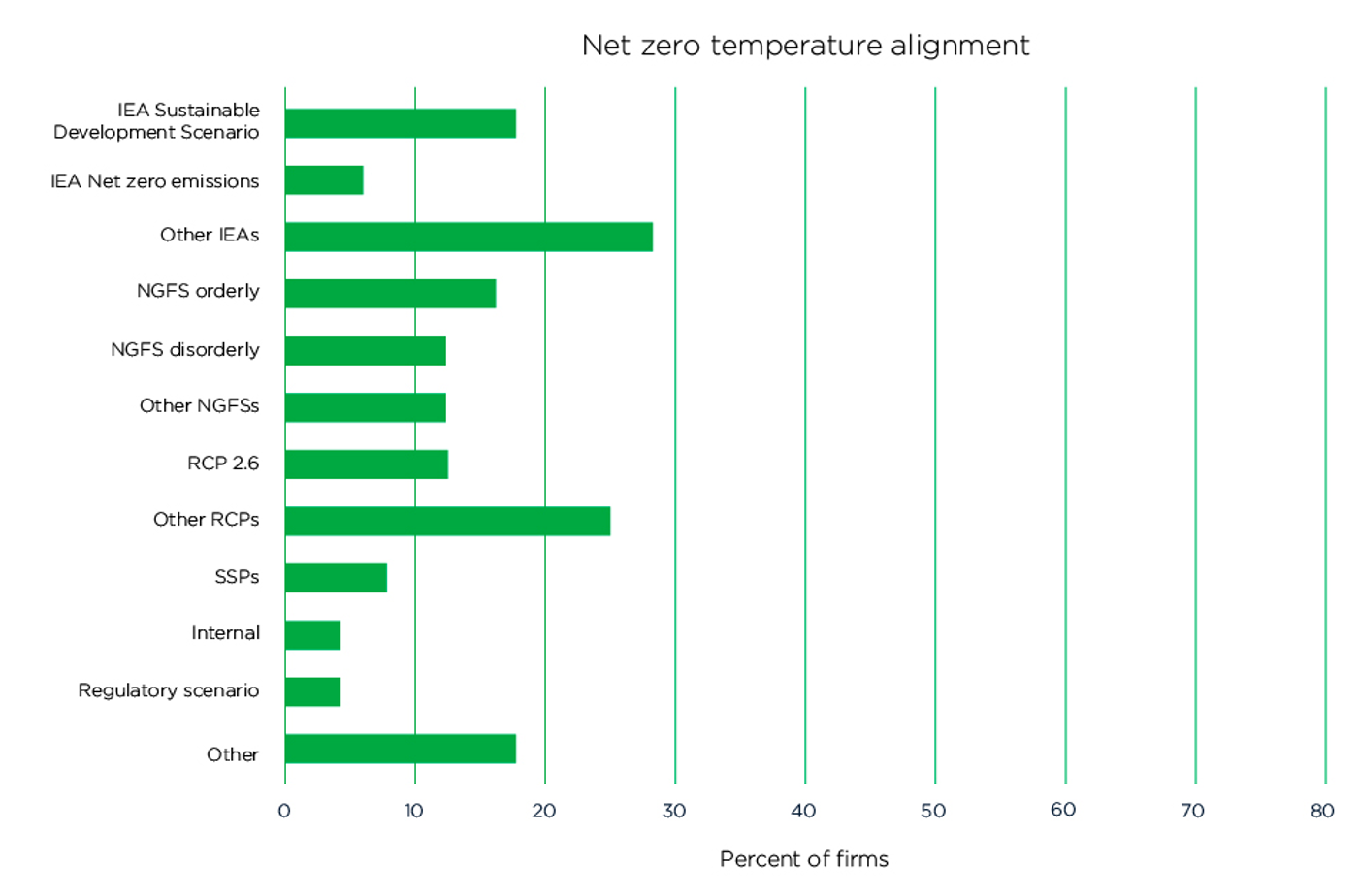 Figure 9: Criteria Behind the Choice of Scenario 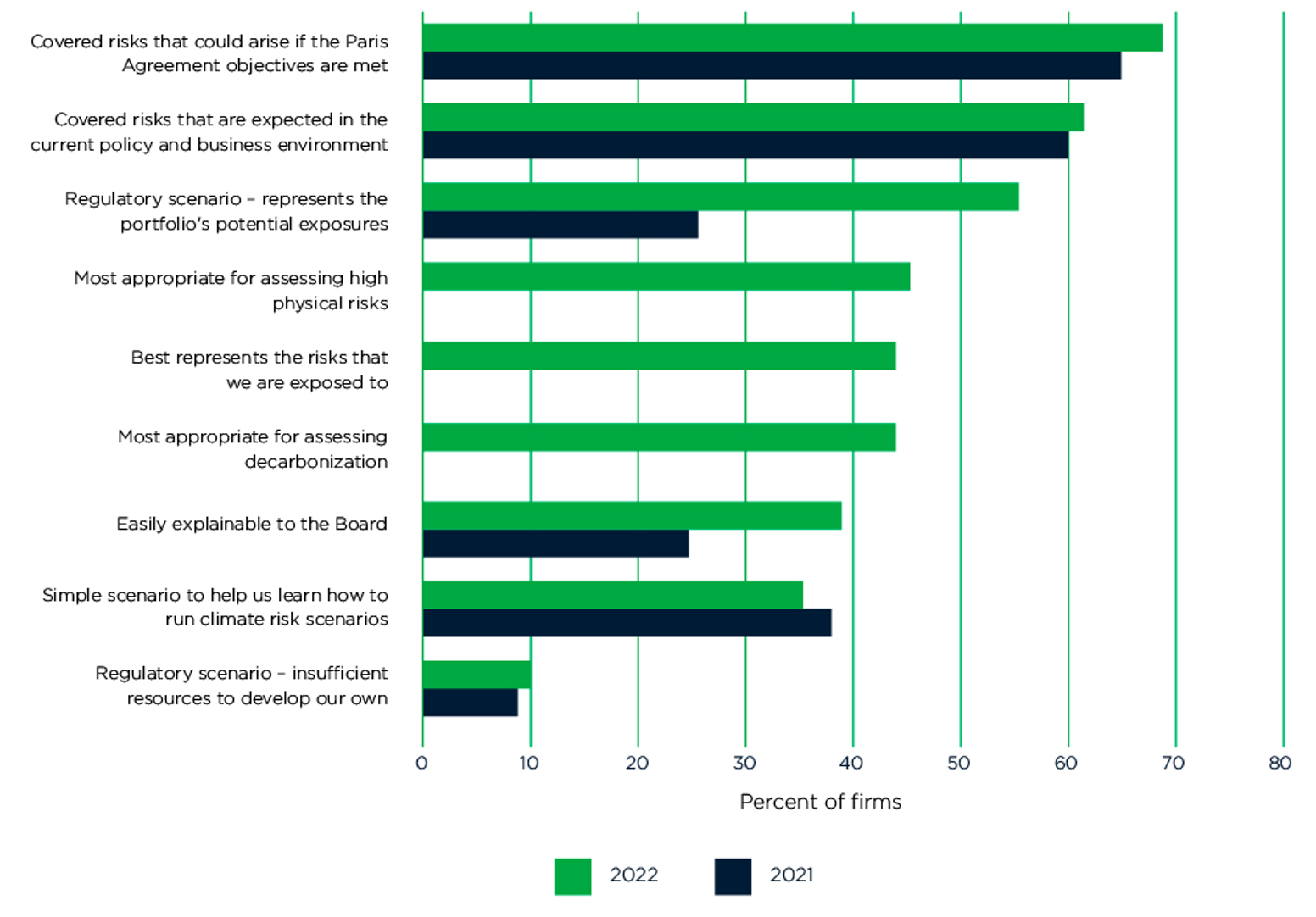 Last year, we noted that firms might also choose to run a scenario as a “baseline” against which to assess impacts. This year, just under 65% report using a baseline (considerably higher than last year’s 38%), indicating that this may be becoming a more widespread practice.

Figure 10 shows the relative popularity of using different scenarios as baselines. The most common approach is for a firm to simply use its baseline company forecast, with regulatory scenarios being the second most common choice. 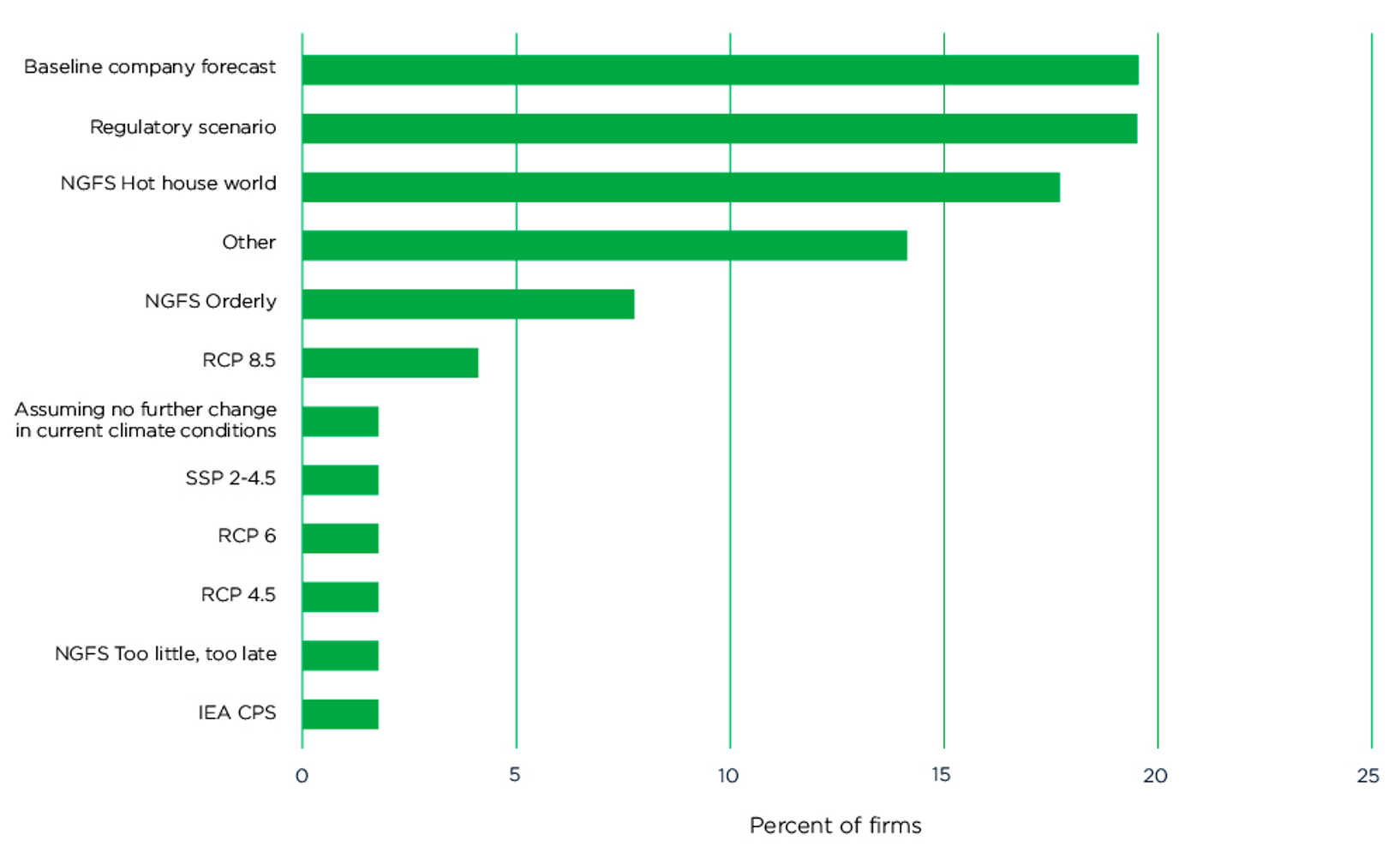 Firms differ in how they focus their analysis. As Figure 11 shows, nearly 90% of the firms undertaking climate scenario analysis focus on the most material exposures or portfolios, ahead of the 82% citing climate risk considerations (e.g., highly vulnerable portfolios). Consistent with the increase in regulatory interest, we see more firms citing regulatory guidance as determining the scope. Ten percent of firms mentioned other reasons, including data availability, client demand, and coverage of the third-party platforms they are using.

Figure 11: Most Common Factors Driving Decisions on the Scope of Scenario Analysis

In a new question that was added to the survey this year, we asked firms what proportion of their portfolios were covered by the analysis. Firms were allowed to pick whatever denominator made the most sense for their business – for example, it might be assets under management for an asset manager, total lending for a bank, and premiums written for an insurance company.

Figure 12: Proportion of Portfolios to Which Scenario Analysis Is Applied

Note: This figure is a percent of the 49 firms that answered this question

As Figure 12 shows, there is quite a wide variation in scenario analysis coverage: nearly 40% cover more than three quarters of their business (however defined), whereas a further 38% cover less than half. This disparity may be driven by the factors shown in Figure 11; nonetheless, it does indicate that not all climate risk scenario analysis exercises provide very comprehensive coverage.

This year’s deep dive shows the rising influence of the regulator – from the growing use of NGFS scenarios, to increasing participation of firms in regulatory exercises, to the scope of portfolio coverage. Increased regulatory scrutiny has no doubt accelerated firms’ efforts in climate scenario analysis, which is to be applauded. The fact that supervisors and central banks are actively engaged to learn from one another (through the NGFS) is also very positive.

That said, climate change is the ultimate global risk management challenge. It’s therefore important to ensure that we get a healthy balance between regulatory and firms’ own climate scenario analysis exercises in the coming years. Given the degree of uncertainty associated with different climate outcomes, it is also particularly important for firms to use a variety of scenarios to ensure they understand the full range of possible impacts.

The NGFS is a coalition of central banks and supervisors that has developed various scenarios, broadly split into two categories:

The IEA produce a range of scenarios, including:

In each of the above scenarios, the IEA assumed that the pandemic would be largely brought under control by the end of 2021 in advanced economies and in China, but that reining in the pandemic would take longer in many emerging market and developing economies. For more details, see: Understanding WEO scenarios.

Representative Concentration Pathways (RCPs) are a series of scenarios used by the IPCC, based on different projections of atmospheric concentrations of greenhouse gases and other air pollutants and land use by the year 2100. Four RCPs were published in the Fifth Assessment report: RCP2.6, RCP4.5, RCP6.0, and RCP8.5. Each RCP corresponds to a different level of total atmospheric “radiative forcing” (a direct measurement of the greenhouse effect), meaning that they each produce different degrees of future global temperature increase.

Shared Socioeconomic Pathways (SSPs) are a series of scenarios synthesized by the IPCC, which outline different states of socio-economic prosperity and resilience by the year 2100, based on different possible trajectories of development. Five SSPs were published in the Fifth Assessment report: SSP1 through SSP5, which reflect five different sets of socio-economic assumptions.

A new set of five SSPs were published in the Sixth Assessment Report: SSP1-1.9, SSP1-2.6, SSP2-4.5, SSP3-7.0 and SSP5-8.5. These five new SSPs (SSPx-y) included indicative levels of radiative forcing alongside their socio-economic assumptions. The first number (x) in the label corresponds to the particular set of socio-economic assumptions, and the second number (y) is the level of atmospheric radiative forcing reached in 2100. The following are outlined in the IPCC’s Sixth Assessment report:

For more information, see Annex 2 of the CFRF’s 2020 Scenario Analysis Chapter, and the GARP jargon buster.

This chapter represents the output from the Scenario Analysis Working Group, part of the Climate Financial Risk Forum (CFRF).

This CFRF guide has been written by industry, for industry. The recommendations in this guide do not constitute financial or other professional advice and should not be relied upon as such. The PRA and FCA have convened and facilitated CFRF discussions but do not accept liability for the views expressed in this guide which do not necessarily represent the view of the regulators and in any case do not constitute regulatory guidance.