Emerging market economies, hit disproportionately hard by the pandemic and related shocks, are yet again reeling from inflation and other economic effects of the Russia-Ukraine war. That is the overriding factor in the International Monetary Fund’s global GDP growth forecast falling to 3.6% for 2022 and 2023, from last year’s 6.1%. Prospects for higher interest rates along with COVID variants and gaps in vaccine distribution enhance downside risks for a sizable swath of developing markets and investments in them.

In several emerging markets, fiscal responses to the pandemic have resulted in higher debt-to-GDP ratios. This raises concerns over debt deterioration and sovereign defaults, especially amid heightened geopolitical risk and rising commodity prices.

“In short, even before the Russia-Ukraine crisis, 2022 was shaping up to be another challenging year for EMs in that many have yet to recover to pre-pandemic levels of economic output,” said Alex Etra, senior strategist with New York-based macro research and FX strategy firm Exante Data. “On top of this, you now have the invasion of Ukraine, which has damaged risk sentiment and tightened financial conditions.” 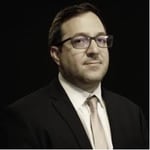 He added, “While most emerging markets outside Central/Eastern Europe and Central Asia have manageable direct trade and financial exposures to Russia and Ukraine, they are now being further buffeted by a supply shock from global commodity prices that has been triggered by the crisis and the sanctions response” – affecting food and metals in addition to energy.

“Emerging and frontier markets now face higher risks of capital outflows, with differentiation across countries between commodities importers and exporters,” Tobias Adrian, IMF financial counsellor and director of the Monetary and Capital Markets department, wrote in an article accompanying release of the fund’s Global Financial Stability Report. “Amid geopolitical uncertainty, the interplay of tighter external financial conditions and the U.S. Federal Reserve normalization (first rate increase delivered in March and unwinding of the balance sheet expected to be faster) is likely to increase the risk of capital flight.”

“The zero-COVID policy is forcing large-scale city closures,” noted Andrea DiCenso, vice president and portfolio manager with the Alpha Strategies team at Loomis Sayles. “With all these China-specific worries, the region is also not immune to Russia-Ukraine headlines, despite stating they do not want sanctions to affect China. The pace of China's growth in 2022 and the response by the PBOC will be extremely important to the commodity super-cycle that was well underway before Russia-Ukraine was in the headlines.”

Fitch Ratings said that as of March 25, a record-high 13 out of 120 sovereigns in the rated portfolio were CCC or lower. Argentina, Belarus, Republic of Congo, El Salvador, Ethiopia, Laos, Mozambique, Tunisia and Ukraine were at CCC, Sri Lanka at CC, and Russia at C. Lebanon and Zambia were rated RD (restricted default). As a result, said Fitch global head of sovereigns James McCormack, “all emerging market regions have sovereigns in distressed situations – Emerging Europe, Emerging Asia, Latin America, Middle East & North Africa (MENA), and Sub-Saharan Africa.”

Ratings CCC and lower do not carry outlooks from Fitch, but all other sovereigns do, and in that context, only MENA does not have at least one country with a negative outlook. Sub-Saharan Africa, which has had the most negatives for several years, has six – Ghana(B-), Kenya (B+), Lesotho (B), Namibia (BB), Rwanda (B+) and Uganda (B+). The primary reason is “relatively high levels of government debt, and particularly high interest service burdens (interest payments relative to government revenue),” McCormack said.

Another indicator, from an April IMF analysis of the implications of COVID-19 shocks and the Ukraine war on debt conditions: “About 60% of DSSI [G-20 Debt Service Suspension Initiative] countries are at high risk of debt distress or already in debt distress – when a country has started, or is about to start, a debt restructuring, or when a country is accumulating arrears.

“Among the 41 DSSI countries at high risk of or in debt distress, Chad, Ethiopia, Somalia and Zambia have already requested a debt treatment. Around 20 others exhibit significant breaches of applicable high-risk thresholds, half of which also have low reserves, rising gross financing needs, or a combination of the two in 2022.” 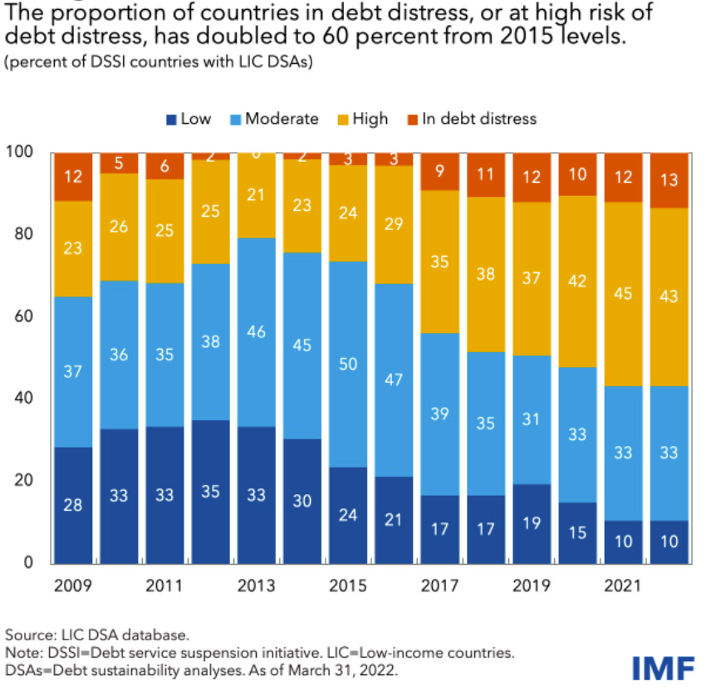 “With sovereign debt risks elevated and financial constraints back at the center of policy concerns, a global cooperative approach is necessary to reach an orderly resolution of debt problems and prevent unnecessary defaults,” wrote IMF authors Vitor Gaspar and Ceyla Pazarbasioglu.

A stronger U.S. dollar is expected as interest rates rise, and there is typically a strong correlation between the dollar and EM sovereign credit ratings; dollar appreciation is associated with lower EM ratings, as debt service costs in U.S. dollars rise in local-currency terms.

The likelihood of both Ukraine and Russia defaulting on foreign debt obligations “will weigh on indexed returns,” assuming they are still included in indexes,” Etra explained. “It is a difficult environment to imagine we’ll see broad spread compression, and benchmark risk-free rates are rising, which could make traditional or safer investments in developed market debt more attractive.”

Looking at the Latin America region, 2022 will bring elections in Brazil and Colombia, heightening the possibilities changes in policy direction, coupled with the risk of pre-election policies being loosened.

Given the Ukraine conflict’s impact on oil and other commodities, “we are watching carefully for any signs of division with OPEC and OPEC+, or between the U.S. and its traditional allies in the Gulf,” Etra said. “And in Asia, we will be watching for signs of how China manages the fallout from the Russian invasion both in terms of Sino-Russian relations/trade but also Sino-U.S. relations.”

Rising commodity prices are a likely positive for emerging-market net exporters, though not all fall into that category. McCormack said that “terms-of-trade deteriorations can be expected in Turkey, China, India and a number of other Asian economies. Regions that will benefit from higher commodity prices include Latin America, Sub-Saharan Africa and MENA.”

With many areas of emerging-market fixed income having been dramatically repriced, investors are finding more attractive yields. For example, EM local markets now reflect more hawkish central bank policy, as many responded aggressively in 2021 to concerns of rising inflation.

“As a result, the EM nominal yield advantage over developed markets stands at ~ 400+ bps, the highest levels in more than a decade,” said Loomis Sayles’ DiCenso. “While this certainly stands out as an attractive opportunity, it must be weighed against the risk of continued upward inflation pressures and elevated volatility.”