The Uncertainty of Inflation Risk

Everyone is worried about how bad inflation could get and how long it could last. While no one can predict an exact scenario, it is possible to estimate the ranges of the inflation rate and its consequences for the market.

Fears of inflation have been rising. Indeed, persistent inflation and monetary tightening is now the most cited potential market shock, according to the Federal’s Reserve’s most recent financial stability report.

There is no consensus, as of yet, on how inflation risk can and should be managed, partly because there is no broad agreement on the causes of the present inflation predicament. In short, inflation is hard to forecast. But one thing is certain: when attempting to model inflation, a wide-ranging, multi-scenario approach is needed.

Before digging deeper into the logic behind a strategy that takes into account even the most unexpected inflation scenarios, it’s helpful to reflect on where we stand today. Supply-chain disruption is one of the reasons most commonly flagged as the cause of 2021 inflation. But experts disagree on whether inflation will keep its current pace when supply-chain shortages dissipate and economic growth slows down.

While most believe that the current inflation will prove transitory as supply-chain issues are resolved (eventually returning to the 2-3.5% range), a diverse group of participants in a recent crowdsourced survey expressed their belief that portfolios could lose more than one-third of their value if inflation stays high. What’re more, the mechanism of inflation - e.g., the influence of central banks and the degree to which expectations matter - is another source of disagreement.

Amid all of these differing opinions, there is a broad agreement that inflation is propelled by a path-dependent process, with inflationary experience shaping people’s expectations - which, in turn, influence future rates of price increase. However, this process might be interrupted by central banks’ actions, another variant of COVID, and/or other shocks. 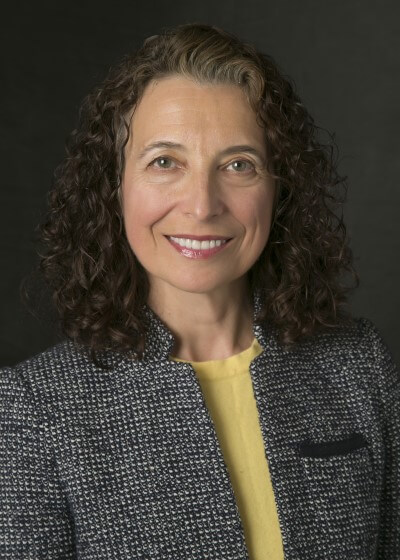 This uncertainty reinforces the idea that financial institutions must consider the unexpected in their inflation models. But how, exactly, should they go about generating unlikely and/or unprecedented scenarios, and what factors do they need to consider?

Weighing and Preparing for the Unexpected

While it is never possible to forecast the future precisely, the range of future outcomes is typically narrower when there are established historical trends.

This doesn’t apply, however, to inflation, which has held fairly steady for the past three decades. Under such circumstances, it is necessary to use a broad, multi-scenario approach to prepare for the unexpected.

For example, we can generate a full-range scenario analysis that incorporates inflation expectation rising up to 7% annually. To do this - i.e., to generate a wide enough range that include scenarios unobserved in the past 30 years - one needs to incorporate dynamic variable relationships.

In this modern, internet-driven world, instant data is available to everyone (not just financial professionals) - and behavioral patterns are therefore extremely different from those witnessed decades ago. To generate scenarios that would produce an inflation expectation not seen in more than 30 years, one needs to separate stable and shock periods for historical data.

In the chart below, the solid blue line shows historical time series of inflation expectation. The green dots represent changes between the consecutive data points of expectations; the green oval contains such changes within 99th percentile, which can be interpreted as stable market periods. Red circles surround the outliers outside of the “normal” range. 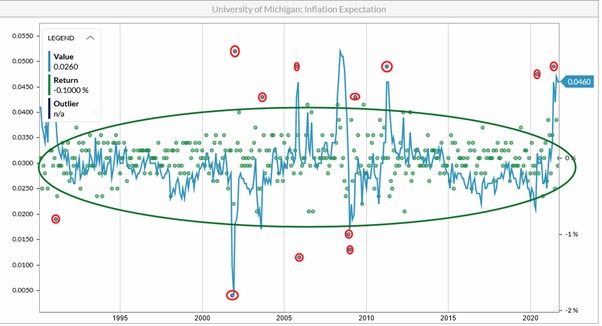 A standard simulation approach for these types of variables either ignores the outliers or averages them together with other observations. But this treatment of data has a smoothing effect on the variable behavior, limiting the possibility to generate unprecedented outcomes based on the data that didn’t contain them.

By acknowledging these outliers and treating them separately from the rest of the observations, it is possible to learn the stable mean and the variance of the variable - as well as the shock reaction typical for a specific variable. The parameters of the simulation model should be calibrated to address this distinction between stable periods and reactions to external or idiosyncratic shocks - e.g., how much the variable moves up or down, and whether it has an aftershock recovery (over a specific period of time).

Applied to multiple variables on the scenarios consistently, this approach allows us to generate unprecedented scenarios, by alternating between stable periods and historical or hypothetical shocks - and by capturing further path-dependent impacts they might cause.

This is how we can analyze the potential stagflation scenarios for, say, inflation expectation that reaches 7% in one year and for an unemployment rate hovering in the low double digits.

Since they contain many market variables with consistent values, these scenarios can calculate the respective ranges for other variables critical for banks’ asset-liability management (ALM), expected credit loss (ECL) and capital and liquidity ratios.

Bank deposits under such stagflation scenarios (which take one-year and 10-year Treasury rates into account) are likely to trend down - by an average of 10%. Credit spreads, meanwhile, may rise by between 65% and 70%, triggering increased probabilities of downgrades and defaults - which would, in turn, impact both ECL and capital ratios.

So, while studying the impact of such path-dependent scenarios like inflation or stagflation, it is important to capture all of the potential consequences.

We might be entering a period of above-target inflation, which could re-anchor inflation expectations at the long-run target. There remains, however, a strong element of uncertainty. Banks therefore need to rethink their funding and liquidity strategies, weighing all potential scenarios - even the most unexpected.