How to Manage Balance-Sheet Risk in Volatile Times

Given the looming prospect of a recession, it’s critical for financial institutions to strengthen their balance sheets. To meet this objective, firms will need to use a proper mix of scenario and sensitivity analyses – but they must first understand the difference between these tools, as well as when each should be deployed.

If the wind changes, you’ll stay like that! When I was a tot, I’d make silly faces, and my parents sometimes tried to persuade me to stop by teasing that my face would remain in an unflattering position if the wind were to shift suddenly. Similarly, if financial institutions don’t pay close attention to today’s quickly changing financial, macroeconomic and geopolitical winds, they could get caught with egg on their face as they try to manage their balance-sheet risk.

One way to improve balance-sheet risk management at your firm is to build a comprehensive, forward-looking model that includes both scenario and sensitivity analyses. However, in these volatile times – marked by a combination of unprecedented events – it’s difficult to get your head around all of the scenarios that you need to consider.

Remember, every scenario must capture the consequences that might lead to catastrophic outcomes, in addition to the initial shocks. After COVID-19, we had, for example, supply-chain disruptions, accelerating inflation (when interest rates were near zero), Russia’s invasion of Ukraine, and a subsequent jump in oil prices. What’s more, there could still be new shocks and knock-on effects we’ve yet to experience.

Producing accurate scenarios is, in fact, one of today’s significant challenges for financial institutions. In the example below (see Figure 1), you can see a big gap between projections and realized values of the variables for U.S. inflation; as the charts depict, the projections have failed, even after correcting for an initial shock. While COVID-19 produced an excuse for misguided forecasts, its consequences were still being underestimated six months later. 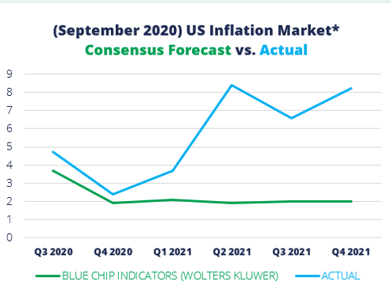 The only way to analyze the current variety of shocks and impacts over time is to generate the full range of scenarios (with all permutations and combinations of events), supplemented by sensitivity analysis. Complicating matters is the fact that it takes a significant amount of time to build such scenarios and to analyze their impact.

Indeed, since there is historical bias in all expert opinions, the human mind is not capable of looking through all of the potential outcomes objectively. We must therefore rely on computers (machine learning) to do this work, sieve through all probable combinations, and retrieve the few scenarios that are relevant and critical – all in minutes instead of weeks.

However, even with aid of next-generation technology, firms still need to figure out the proper mix of scenario and sensitivity analyses to enhance their forecasts and to improve their balance-sheet risk management.

We’ll talk about how to blend these tools and when to deploy them in a minute. First, though, let’s discuss the purpose scenario and sensitivity analyses, as well as their differences.

Scenario analysis has always been the most intuitive way to analyze uncertainty. In short, it is an approach for estimating the effects of key performance indicators (KPIs) on a portfolio or on an entire balance sheet of changes in underlying variables. These variables might include macroeconomic and market factors, or things like deposit runoffs or prepayment curves at a specific bank.

The calculated KPIs are often credit losses, NII or other ALM outcomes – as well as, sometimes, capital and liquidity ratios. Scenarios are built over a reasonably long-term horizon – from nine quarters in CCAR stress tests to several decades in climate scenarios.

Sensitivity analysis, on the other hand, helps identify how changes in specific underlying scenario variables affect particular KPIs. It’s mainly used in hedging by identifying “Greeks” (e.g., delta, gamma, theta) – for example, how would a one-month rate move of one basis point change the cost of a particular transaction?

These types of sensitivities are measured with respect to all underlying variables of pricing models. They make sense only over very short intra-day time horizons; shifting just a single variable over a long-term horizon doesn’t make sense, as the other variables would not remain constant.

Understanding the objectives of scenario and sensitivity analyses is quite helpful, but equally important is comprehending when to use each tool.

Proper deployment of both scenario and sensitivity analyses requires a step-by-step approach. One important step is an analysis of the outcomes – which involves the overlay of various balance-sheet alternatives over the full range of scenarios.

Firms with powerful computing engines can afford to perform a bottom-up analysis by running a multitude of scenarios through all their internal models. But even smaller organizations can do such reverse-scenario selection, via applying scenarios to uniform balance-sheet segments and discovering combinations of market drivers that are meaningful for a particular institution.

The final step is the sensitivity analysis. It is usually applied to a single variable to identify partial sensitivity to very small changes and establish the size of the hedge for a particular trading strategy. Applying this technique to larger variable moves (e.g., 100-basis point parallel shift of yield curve), or over the longer term, is not theoretically sound – because other scenario variables will not stay the same, either.

In our example, we have multiple, long-term scenarios where the changes (even unprecedented ones) in one variable are already consistently combined with others. So, rather than sensitizing scenarios themselves, it’s important to sensitize the various parameters used to produce the firm’s outcomes. These parameters include the number of shocks and their severity in impacting scenario variables, as well as probability bounds that the firm selects for its risk appetite and risk capacity.

The way to verify the right parametrization is through backtesting the outcomes.

First, check that scenarios generated with the data available prior to a crisis include the actual crisis scenario with a reasonable probability – at least one to five percent.

Second, making sure the confidence intervals selected for risk limits do not leave room for unpleasant surprises later.

Like in many numerical calculations, you need to stop when additional iterations do not substantially change the result. In this type of sensitivity analysis, one must make sure that the tail-risk boundary captures all major risks. This means that the conditional expectation of all outcomes beyond the selected percentile should not be far from the percentile itself.

For example, if a firm selects 90th percentile to stress test their capital ratios but the 95th percentile shows a dramatic further decline in them, the sensitivity analysis would recommend testing against the higher percentile. Consequently, management will be able to consider all outcomes, and will have enough time to execute their proactively developed contingency plans, whatever ill winds blow.

Risk managers can use a combination of scenario and sensitivity analyses to improve balance-sheet risk management during periods of unprecedented uncertainty. Alternative balance sheet strategies suggested by robust quantitative models should be overlaid over the full range of macroeconomic and market scenarios, while sensitivity analysis should be applied only to the parameters of such models.

Under this approach, both stable and stressed market conditions will be considered, and accurate assessment of tail risks will be performed. Moreover, the chances of missing relevant changes in the market environment will be substantially reduced.

The end result will be a robust, optimal balance sheet strategy that leverages multiple future scenarios.