A Date with Destiny: The Importance of Demographics for Risk Modelers

Over the next five years, credit risk could be significantly impacted by worldwide population changes that are being driven by migration, geopolitical stress, hazardous weather patterns and decreasing birth rates. What steps do risk managers need to take to prepare for current and emerging trends, and to make the adjustments necessary to improve the accuracy of their credit models?

Population size has been – and continues to be – a direct determinant of economic capacity and growth. However, despite the importance of demographics on the future trajectory of the economy, risk managers and modelers have often either ignored them entirely or made implicit assumptions about them that minimize their importance.

It’s now time to get explicit.

In the past, analysts may have been able to rely on steady population growth and slow-moving migration patterns in sweeping demographics to the side. That’s no longer the case, as shifting weather patterns and geopolitical tensions force more people to migrate, and as sharply declining birth rates cause populations to age rapidly.

These population shifts may not have much of an impact on credit risk next month or next quarter, but they will influence behavior within the lifetime of most business loans, mortgages and other forms of credit. Any institution that plans to be in business for at least the next five years needs to scrutinize the impact that demographics could have on their lending decisions and risk assessments.

The COVID-19 pandemic illustrates just how quickly demographics can change and affect unprepared businesses and lenders. For example, in many parts of the world, migration patterns both within and between countries that were expected to occur over the next decade or two were compressed into the last two years.

In the United States, as remote work has become both a possibility and preference for millions of individuals and their families, households moved south and west at an accelerated pace. Moreover, a sharp drop in foreign immigration has led to unprecedented declines in population growth in urban centers, such as New York City, dramatically altering established patterns in supply and demand for housing and other goods and services. Local restaurants and cafes are some of the most visible victims of the change, but other businesses and supply chains have been disrupted as well.

Beyond North America, Europe has experienced a significant rearrangement of internal population and trade flows due to COVID-19 and Brexit. What's more, they’re also now coping with a massive influx of Ukrainian refugees and a wave of migrants from Africa and the Middle East – people who are trying to escape economic pressures brought on by both climate change and armed conflict. The strains on households, governments and businesses are evident, increasing the risk of both a protracted recession and social unrest.

For emerging market countries in Africa, Asia and Latin America, demographic shifts are responding to both the challenges and opportunities resulting from the pandemic, as well as the Russian invasion of Ukraine. Rising demand for energy and agricultural commodities has attracted workers to mines, wells and farms – while a strong U.S. dollar and rampant inflation have increased the financial pressure on households. Given the uncertainty, birth rates have continued to fall in these regions, while internal and external migration has risen.

Given that these demographic shifts won’t be reversed anytime soon, what should risk managers do? The first step is simply to educate themselves and raise awareness.

Business teams and risk modelers need to familiarize themselves with both the current and forecasted demographic changes, taking into account how shifting trends could impact their forward-looking assumptions and forecasts – both negatively and positively. Despite our natural proclivity to look to the past to predict the future, this is a situation where prior experience may be misleading without careful consideration of the underlying trends that shaped the historical record.

Although large multinational corporations may be most exposed to demographic shifts on a global scale, their diversification across many markets may serve to reduce some of their overall risk, as losses in areas with a decreasing population may be offset by the areas that gain. Conversely, smaller institutions may believe they are immune to structural shifts in population given their local footprint – and therefore they can ignore the issue entirely. However, their regional concentration may, in fact, expose them to even more acute affects should in- or out-migration rates in their area shift materially.

Risk organizations need to consider the impact of more subtle shifts in demographics as well. Migration is obvious, directly observable and widely reported. Less visible may be shifts in the structure of the underlying population.

For example, the age distribution in certain parts of the world will change dramatically as birth rates fall and life expectancy increases. Indeed, even if the number of people remains unchanged, an aging population can have profound implications on productivity, output and labor force participation. Demand for saving, investment and credit products could shift dramatically, affecting the mix of services that a financial institution may profitably offer.

From a technical standpoint, risk modelers may want to train their algorithms on per capita measures, rather than gross measures of output (e.g., GDP) or income. Looking back, when the U.S. population was growing at a constant, robust rate, the percent change in GDP may have been fine as a measure of broad economic activity. Now, however, it may distort underlying economic performance.

Today, rather than evaluating growth in national income, modelers may want to consider measures of per capita or per household wealth and income. A case in point is the U.S., where rapid overall real GDP growth in the 1990s was driven in part by faster population growth. 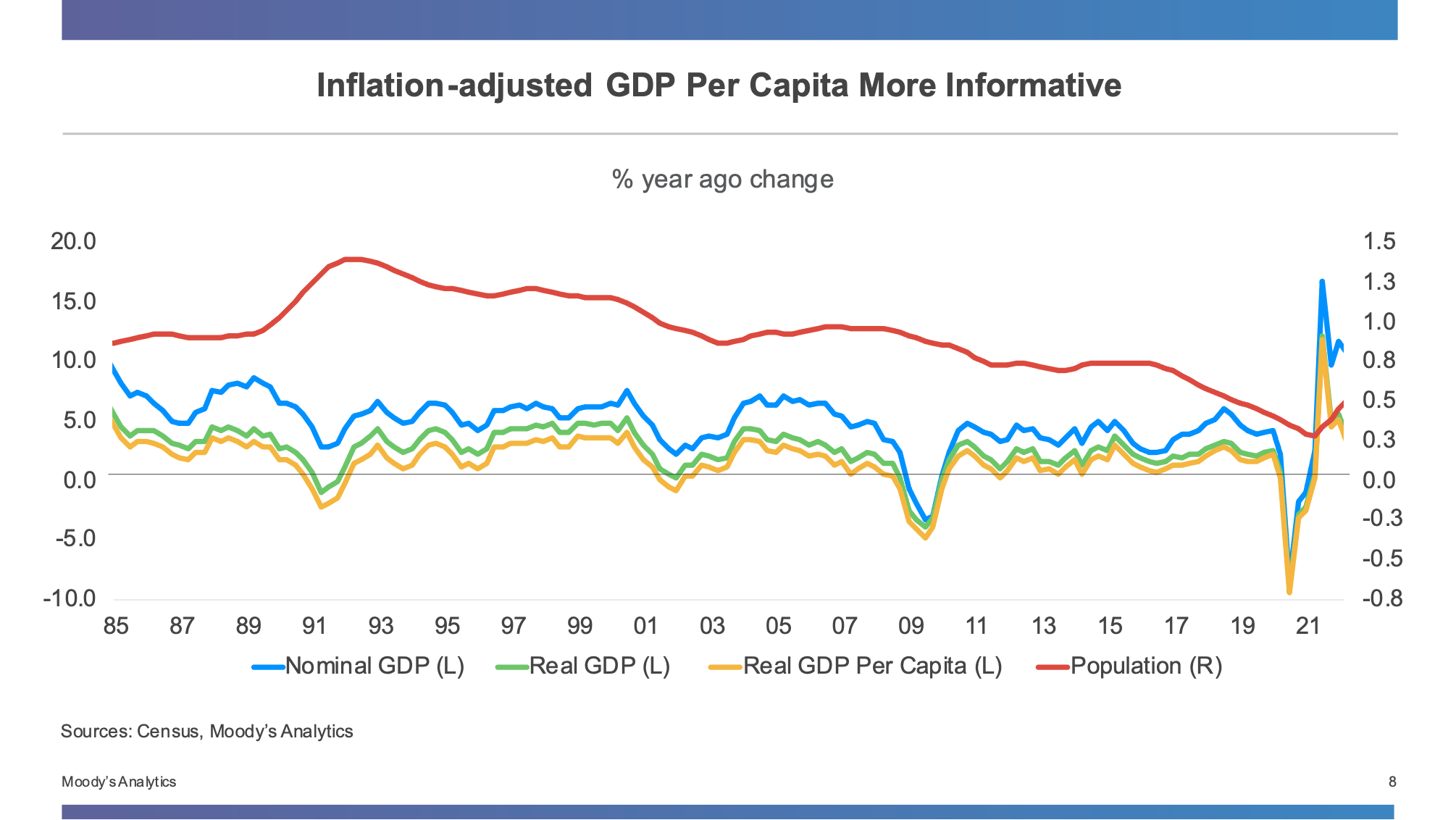 Although the world has shifted away from mostly manual labor, population size still matters, as more brains equates to more potential economic output, and as more bodies add to the demand for goods and services. However, while demographics may be destiny, the reverse is also true. Broad incentives, opportunities and individual choices affect the number of births and deaths over time, in addition to the quality of life.

Individual firms may not have much influence on these factors directly, but an understanding of underlying trends can help them to best position themselves to avoid the risks presented by deteriorating trends and to take advantage of emerging opportunities. To capitalize on the opportunities that arise, organizations will need enough situational awareness to understand where populations are headed – combined with flexibility and sufficient resilience to manage through changes.

More accurate risk models based on demographically-adjusted economic indicators can facilitate better decision making and improve the efficiency of credit decisioning, servicing and loss provisioning. Demographics may be destiny, but individuals, organizations and governments still play an important role in shaping the future.

Cristian deRitis is the Deputy Chief Economist at Moody's Analytics. As the head of model research and development, he specializes in the analysis of current and future economic conditions, consumer credit markets and housing. Before joining Moody's Analytics, he worked for Fannie Mae. In addition to his published research, Cristian is named on two US patents for credit modeling techniques. He can be reached at cristian.deritis@moodys.com.