Although still at an early stage, blockchain technology is proving capable of streamlining issuance and settlement of financial instruments

Settlement delays are costly enough to concentrate the minds of the financial markets’ biggest institutions and infrastructure operators. Depository Trust & Clearing Corp. (DTCC) is leading an effort in the U.S. to shorten the equities clearing cycle from two business days to one, while at the same time spearheading Project Ion, a potentially transformative attempt to bring blockchain, or distributed ledger technology (DLT), into the process.

That is just one sign of the mainstreaming – call it institutionalization – of DLT. Promotion of blockchain is not associated only with bitcoin or other speculative products. The market is coming around to the selling points of digital infrastructure companies like Paxos, which has been pushing blockchain’s settlement-risk-reduction potential for several years.

“The more you can shorten the time from when a trade happens and is agreed upon to the time that it settles, you’re inherently reducing risk,” explains Thomas Sullivan, New York-based managing director of the Global Business Services unit at Societe Generale, which has been active in DLT proofs of concept.

Digitized settlement “has the potential to spark more digitization across the board,” Sullivan says. Indeed, momentum is building to modernize multiple phases of the trading cycle through tokenization – enabling stocks, bonds and other instruments to be issued and exchanged seamlessly on the blockchain.

As recently as this month, Paxos and several partners were in on the formation of the Tokenized Commodities Council, which cited, for support, a Boston Consulting Group estimate that $16 trillion in assets, or 10% of global GDP, will be tokenized by 2030. In a best-case scenario, that could go up to $68 trillion. 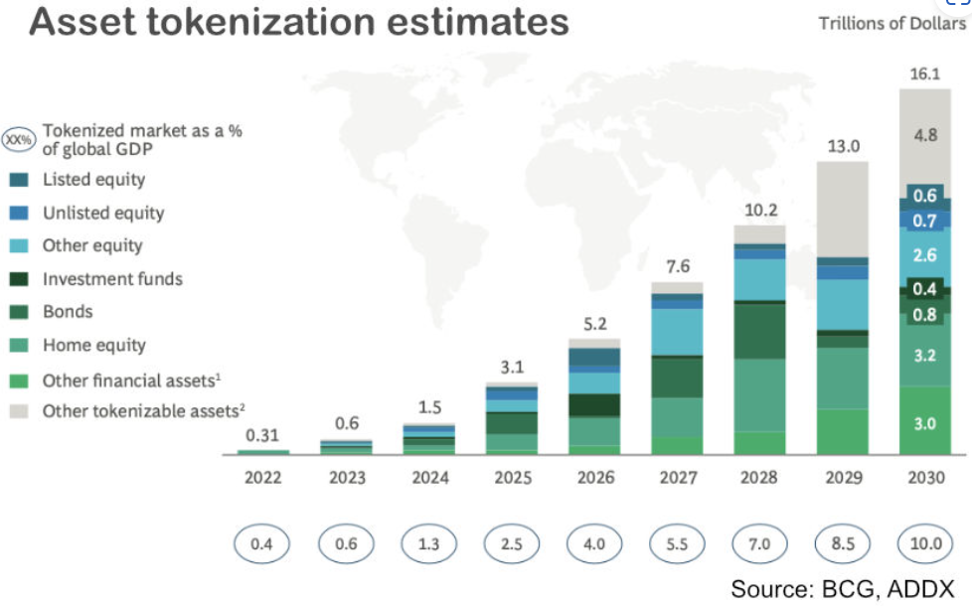 According to Wilshire, more than 10,000 assets, ranging from bonds to carbon credits to works of art, had already been tokenized by the end of last year. That’s about three times the number of publicly listed stocks in the U.S., including microcaps. Wilshire as of August had classified 1,301 of these assets as being representative of available investment opportunities.

“Hamilton Lane offers some of the best-performing private markets products available, but historically they have been limited to institutional investors,” Securitize CEO Carlos Domingo said in the press release. “Tokenization now makes it possible for individual investors to participate in private equity value creation for the first time in a digitally native way.”

“We are at the beginning of a process through which individual investors can access the same kinds of opportunities as university endowments or sovereign wealth funds, and that is very exciting.” Domingo added.

Many asset managers have “maxed out their allocation to institutional investors,” Domingo said in an August interview for this article. Securitize then helped tokenize a KKR private equity fund in September on the Avalanche public blockchain, described as “the first time exposure to one of KKR’s alternative investment strategies has been offered in a digital format in the U.S.”

Also in September, JPMorgan Chase & Co. and LRC Group, which invests in real estate, joined in a $20 million financing round for Ownera, developer of an open-source protocol to trade tokenized assets across multiple platforms.

The advantages in tokenization are “efficiency, speed, real-time, and risk reduction,” says Sullivan. Institutions see the possibility of absolute and instantaneous control over transactions around the clock, removal of intermediary processing steps, less capital or collateral exposure, and the ability to block unqualified investors.

“There’s a view in the market that you could have a smart contract which would not only reflect the position and transaction between counterparties, but would also know how and when to pay a dividend, pay it automatically, embed all other corporate actions possible going forward, and manage all votes until the end of that security,” says Philippe Van Hecke, head of product management at the Luxembourg Stock Exchange.

Societe Generale Forge in January listed three series of security tokens on the Luxembourg exchange, where security tokens were not yet eligible for trading. It was a “milestone” hailed by LuxSE chief executive Julie Becker as “a very first building block in our contribution towards price discovery and transparency of financial instruments issued using DLT.”

“We know it’s a very first step,” Van Hecke says. “We want to provide visibility for security token issuers and their tokens.”

Tokenization could reduce risk on new issues, such as corporate bonds. Instead of exposure to market fluctuations after a decision is made and before a bond is issued, the bond can be issued instantaneously as a security token.

“You can be much more precise in how you enter your risk metrics and how you need to adjust your positions to mitigate risk,” says Charles-Antoine Michallet, director of structuring at Societe Generale Corporate and Investment Banking in New York. “It means you can manage your risk 24/7, basically.”

Tokens backed by conventional assets as collateral can allow a lender and borrower to skip the costly and time-consuming step of hiring a triparty agent to verify the collateral’s suitability to both counterparties’ needs, Sullivan says. SG Forge put up OFH Tokens, which represent covered bonds backed by home loans that mature in 2025 at a zero interest rate, as collateral against a $30 million loan in DAI tokens from MakerDAO on the Ethereum blockchain.

SG Forge has been registered in France for buying, selling, trading and custody of digital assets as of September 27.

Tokenization can also reduce compliance risk. Instead of relying on a central authority or network for complying with rules against selling securities to unqualified or otherwise ineligible investors, rules can be embedded in smart contracts to ensure continuously that predetermined conditions are met.

“You can very well imagine that the eligibility or compliance rules to access a security would be defined at token level, meaning that it would be accessible for holding and transacting only to those investors it is targeted to,” Van Hecke explains.

Clearstream announced October 10 a significant digitization advance with the first automated securities issuances on its parent Deutsche Börse’s D7 post-trade platform. The system “works as a connector between established networks and digital capabilities,” Clearstream said, with “smart objects” representing the financial instruments throughout the processing and reporting cycle.

“They are technology-, asset-class- and location-agnostic and enable same-day issuance, automated straight-through processing and asset servicing of securities across established and new financial networks and infrastructures.”

Elsewhere, SIX Group’s SIX Digital Exchange (SDX) in Switzerland is working toward DLT issuance of private-market participation certificates with Berner Kantonalbank and daura (a joint venture owned in part by the bank and SDX). In Israel, a Ministry of Finance office and the Tel Aviv Stock Exchange revealed plans for a proof of concept of tokenized government bonds, with support from digital-asset technology leaders VMware and Fireblocks.

Like other crypto-asset market participants, tokenization players are awaiting clarity in securities and commodities regulations. Passage of U.S. legislation, which has bipartisan support, could help. It faced uncertain odds as the midterm elections in November approached.

Another obstacle is a lack of accepted standards for tokenization, which has led some institutions to take the initiative, as in Wilshire’s Digital Asset Taxonomy System (DATS).

“We are not just waiting for standardization to happen. We are trying to make it happen,” Michallet says. 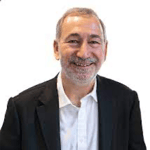 Promoters of digital-asset institutionalization see an upside in this year’s “crypto winter” crash of bitcoin and other token prices.

“The more it moves away from being just crypto and becomes something much more about tokenization, particularly tokenization of private assets and real assets, I think the healthier the market will become,” says Wilshire CEO Mark Makepeace.

“They are all on the verge of getting something done,” says Securitize’s Domingo. “We are at the inflection point in terms of adoption.”