Will Legal Entity Identifiers Get a Legislative Boost?

Post-crisis data standard is widely supported but short on momentum

The 2008 Lehman Brothers bankruptcy and the global crisis that it triggered may be fading into history, but the financial world is still working to fix the data management debacle that the Lehman moment laid bare.

The difficulty of researching and resolving an incredibly opaque web of counterparty exposures gave rise to a solution, the Legal Entity Identifier (LEI), widely embraced in principle yet well short of the adoption rate that advocates say will go a long way toward reducing systemic risk.

Legislation in the U.S. could provide a long-awaited boost. The Financial Transparency Act (H.R. 2989), passed by the House last year and pending in the Senate, would direct the federal financial regulatory agencies to adopt consistent fields and formats for information they collect under securities, commodities and banking laws.

The bill does not specifically mention the LEI, but it is the only entity identifier that currently meets all the required criteria, according to Stephan Wolf, CEO of the Global Legal Entity Identifier Foundation (GLEIF).

The foundation was established in 2014, three years after the G-20 and Financial Stability Board (FSB) set the initiative in motion, to support LEI implementations through a network of local operating units (LOUs). The LEI is a 20-character alphanumeric string that meets International Organization for Standardization (ISO) specifications.

Also not mentioning the LEI by name, a June 9 FSB-International Monetary Fund report on the G-20 Data Gaps Initiative, another post-crisis project, alluded to the concept’s benefits. As a main achievement in “availability of a comprehensive set of information for policymakers,” the report cited: “Global trends in derivative activities on a regular basis and improvements in transparency of derivatives markets through trade data reporting to trade repositories and development of legal entity and transaction/product identifiers.”

In April, GLEIF reported 3.3% growth in first-quarter LEI issuance, with the global total of active LEIs surpassing 2 million – celebrated by that organization as a milestone.

Holding back more comprehensive LEI adoption is the renewal rate, which fell to 61.5% in this year’s first quarter from 62.5% the quarter before. Wolf explained that each legal entity is required annually to renew its LEI and LEI reference data, triggering an independent re-validation by the LEI issuer, to ensure the quality of the reference data. He added that GLEIF “works closely” with LEI issuers and regulators to encourage renewals.

The overall “lapsed rate” – non-renewed LEIs as a percentage of total issued LEIs – was 34.7%, as of an April Financial Intergroup update. “Only about two-thirds of LEIs are renewed annually as required by GLEIF, while the lapsed rate continues to climb,” it said.

Grody sees another shortcoming in the data on relationships between companies and their subsidiaries. He pointed to a 2019 FSB study of LEI implementation in which 55% of respondents viewed the availability of parent-subsidiary data as insufficient.

Wolf said that in the 2022 first quarter, upwards of 96% of LEI registrants reported information on direct and ultimate parents, according to an accounting consolidation standard as defined by the Global LEI System Regulatory Oversight Committee (ROC).

However, the accounting protocol permits the absence of parent LEI data, Grody said, resulting in 3.6 million relationships not recorded with an LEI. Further, he said, roughly half of parent LEIs have not been fully corroborated, as required by the LOUs that registered them. GLEIF attributes this to a lack of authoritative public corroboration sources.

GLEIF anticipates 20 million active LEI registrations by 2027, Wolf said, driven by two initiatives. One is the “validation agent operating model,” which allows organizations that verify and validate identities to obtain and maintain LEIs for their clients in cooperation with accredited LOUs. The model was launched in September 2020, with JPMorgan Chase & Co. first to sign on.

The second initiative, now being tested, is a digital LEI that can be verified automatically, replacing the often manual processes now required to access and confirm an entity’s LEI data. The digital LEI should fuel GLEIF’s recently expanded mission to disseminate LEIs outside the financial industry.

“GLEIF believes that a universal way to digitally verify the legal identities of counterparty organizations and their key individuals is now critical to the future health and stability of the global digital economy,” Wolf said.

A standard identifier across industries will be broadly beneficial, said Grody, a onetime Coopers & Lybrand (now PwC) consultant. GLEIF had been focused on illuminating exposures between financial institutions, a challenge rooted in automation practices dating from the 1960s when firms wrote proprietary codes to represent clients and counterparties. Even today, financial institutions devote significant resources to translating those codes and map their exposures, often requiring manual intervention and increasing risk. 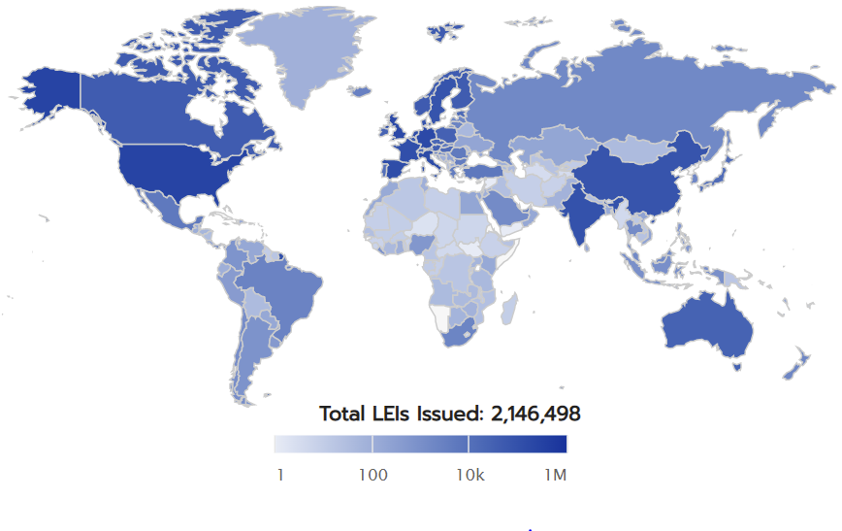 EU in the Lead

While standard LEIs address legacy inefficiencies, there is still a long way to go. According to Grody, European entities make up the bulk of registered LEIs, 65%, because the standard greatly facilitated financial reporting across the unified region. The U.S. accounts for only 15%. Financial industry participants balk at the cost of transitioning their legacy systems to LEIs, despite the promise of long-term savings.

Cost is also an issue for U.S. regulators, which have opted to implement LEIs market by market. The Securities and Exchange Commission, for instance, finalized LEIs last year for security-based swaps.

Grody acknowledges GLEIF’s efforts to overcome implementation obstacles. In addition to validation agents and digitally verifiable LEIs, they include initiating a service to map proprietary codes to LEIs, and relying not just on regulatory mandates but also voluntary industry action.

To speed things up, Grody has long been proposing a top-down approach in which systemically important banks adopt LEIs and use their market presence and influence to get counterparties and vendors to do the same. Wolf said that GLEIF “fully subscribes to the concept that banks should help identify their clients and counterparties in transactions,” although mandating such a requirement is ultimately a local decision. FSB, Basel Committee on Banking Supervision and Financial Action Task Force influence could also come into play.

Grody recommends that the U.S. Treasury and the multi-agency body that it coordinates, the Financial Stability Oversight Council (FSOC), engage the eight U.S.-headquartered global systemically important banks (G-SIBs) to partner up and promote LEIs as a risk aggregation and mitigation tool. To assure the proper hierarchical constructions of the LEI – precisely illuminating parent-subsidiary relationships – the G-SIBs should enlist the assurance services of the Big Four audit firms, Grody said.

Such an effort would be a “short-term win” toward the objective of mitigating systemic risk. Grody noted that the GLEIF has already started engaging the G-SIBs to become validation agents, and the Treasury Department and FSOC could speed the process. He sees the Financial Services Forum, which represents those top banks, as an ideal vehicle: “A call from Treasury Secretary Janet Yellen to [forum chairman and] Goldman Sachs CEO David Solomon should get the ball rolling.”