Nature Loss and Financial Risk: Global Insights From the WWF

Learn about nature loss, its interconnections with climate change, and how it is creating significant risks for business and finance.

The risks associated with climate change do not exist in a vacuum and increasingly we are seeing a focus on broader environmental issues from a range of parties including regulators, investors, governments and NGOs.

GARP hosted a webcast in April 2021 with Margaret Kuhlow, Global Finance Practice Leader at WWF International, to explore some of these broader environmental themes. The session itself focused on how nature loss is generating business and financial risk, and its connections with climate change. This article explores some of the key insights from that webcast (which is available to watch on demand here).

What is Natural Capital, Why is it Important and What is at Risk?

Natural capital refers to aspects of our natural environment that provide valuable goods and services for people and communities. The concept of natural capital is then divided into groups of natural assets, including ‘ecosystems, species, freshwater, soils, minerals, the air and oceans, as well as natural processes and functions’. An example is a woodland: a natural asset that generates numerous benefits, including flood risk reduction and carbon capture.

Natural capital underpins the four traditional types of capital: human capital, social capital, manufactured capital, and financial capital. While these four types are routinely considered in financial and management decisions, natural capital considerations have generally been overlooked in the past. Current efforts to mainstream environmental considerations across business and finance look to rectify this historic imbalance, with much ongoing work to better define and quantify natural capital currently taking place around the world. An example of this is the recent establishment of the Taskforce on Nature-related Financial Disclosures (TNFD).

The importance of natural capital cannot be overstated. The provision of goods that flow from natural capital such as food, water, or climate regulation are essential components of value creation and human wellbeing and are considered fundamental to sustainable development.

Can We Measure Nature Loss?

Unlike climate change, the change in nature is harder to measure. One important indicator of ecosystem health is the diversity of species.

The WWF’s Living Planet Index (LPI), a global project that currently monitors 4806 species and 27,695 populations, provides a set of indicators for the state of global biological diversity based on trends in vertebrate populations of species from around the world. Over the past 50 years, the LPI has found a 68% decline in average population size across the monitored populations of vertebrates. The findings are even more stark for freshwater species with an almost 90% reduction in population size over the same period.

In 2019, the Intergovernmental Science-Policy Platform on Biodiversity and Ecosystem Services (IPBES), a sister organization to the IPCC on climate, published their first global assessment in 15 years.  That assessment found that there were in excess of one million plant and animal species at risk of extinction within our lifetime. One way of framing the implications of this level of biodiversity loss is the impact it would have on our ability to meet the UN Sustainable Development Goals (SDGs). Following their analysis, the IPBES found that this level of loss would risk undermining progress on 80% of the SDGs, including goals related to poverty and hunger, health, clean water and cities.

What is Driving Nature Loss?

The image below, taken from the 2020 Living Planet Report, provides a snapshot of some of the underlying drivers of the nature loss. The single most impactful driver is currently anthropogenic land use change. Land use conversion for agriculture in particular is responsible for over 70% of the terrestrial biodiversity loss and has caused over 50% of freshwater biodiversity loss. Many of these drivers are also causing climate change, implying that there may be common solutions to help alleviate both problems. 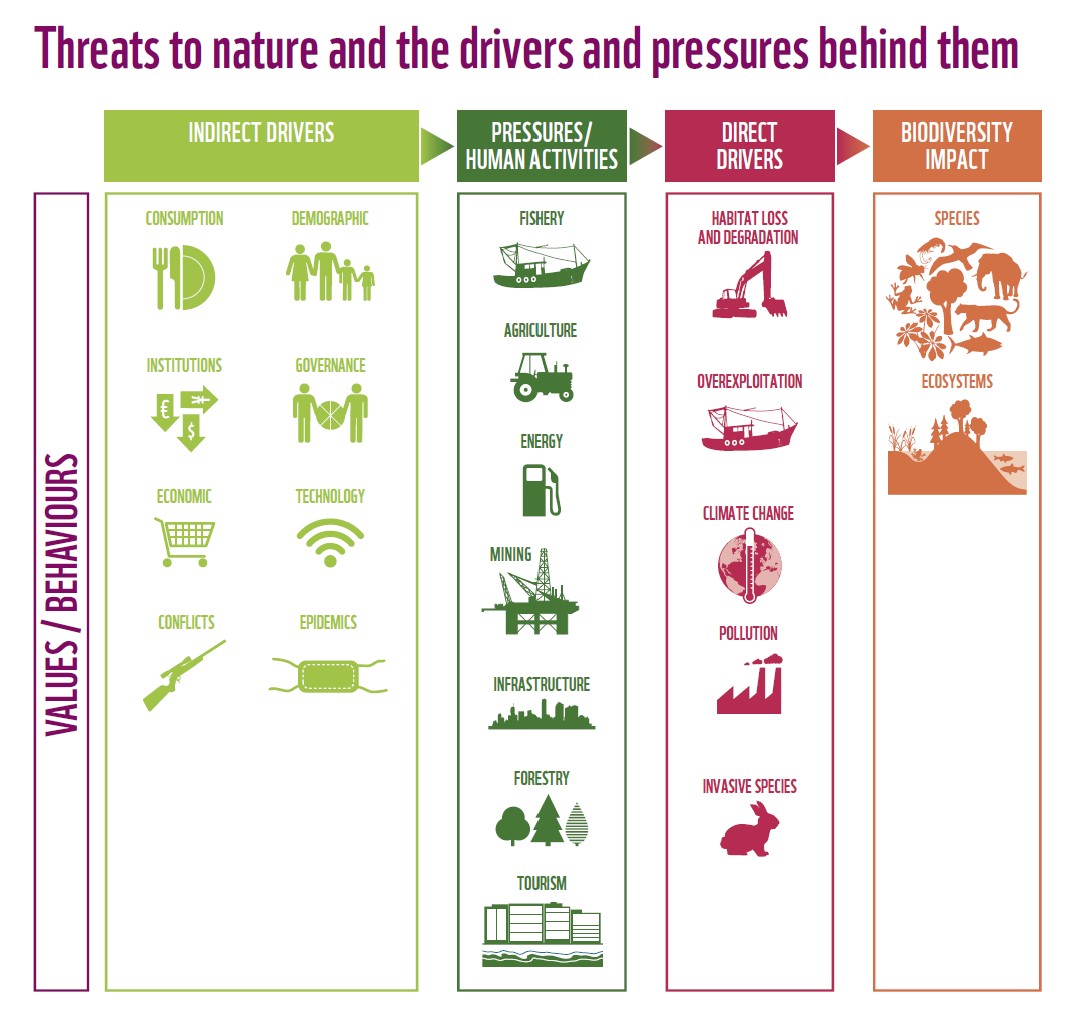 What are the Financial Implications of a Reduction in Ecosystem Health?

One way to better incorporate considerations of nature into business and finance decision-making is to quantify the value of, and costs associated with, maintaining existing global stocks of natural capital.

As noted by Margaret, “we know that nature loss is expensive. Ecosystem services delivered by biodiversity such as crop pollination, water purification, flood protection and carbon sequestration, are vital to human beings – and globally these services are worth an estimated 125-140 trillion US Dollars a year. That’s more than one and half times global GDP.”

She presented a variety of other nearer-term estimates of the direct effects of nature loss and the anticipated overall costs of inaction. For example:

Global Futures, a 2020 report co-authored by WWF and Natural Capital Project, estimates that a business-as-usual trajectory of nature’s decline across 140 countries will cost ten trillion US Dollars in losses by 2050, reflecting impacts from a range of areas such as the supply of water for agriculture, supply of timber, health of marine fisheries, crop pollination, flood protection and carbon sequestration.

How is This Relevant to Risk Professionals?

There are a variety of initiatives to help bridge the gap between these risks and the world of business.

The WWF’s 2019 paper, The Nature of Risk: A Framework for Understanding Nature-Related Risk to Business, presents a framework that aims to capture a business’ vulnerability to nature loss by assessing its dependency on various natural assets, exposure to nature loss and the impact an organization has on nature. This brought together existing work and methodologies including the ENCORE model (Exploring Natural Capital Opportunities, Risks, and Exposure), used last year by the Dutch Central bank to estimate the vulnerability of the Dutch economy to nature loss. It also offers case studies, providing examples of businesses facing consequences due to nature-related risk.

Progress is also being made on bridging the gap between nature-related risks and their incorporation into existing financial risk frameworks. In 2020, a joint report published by PwC Switzerland and WWF Switzerland, Nature is too big to fail, suggests a typology of four financial biodiversity-related financial risks: physical, transition, litigation and systemic risks. The intersection of these risks with the traditional financial risks (credit, market and operational) can be seen in the table below. 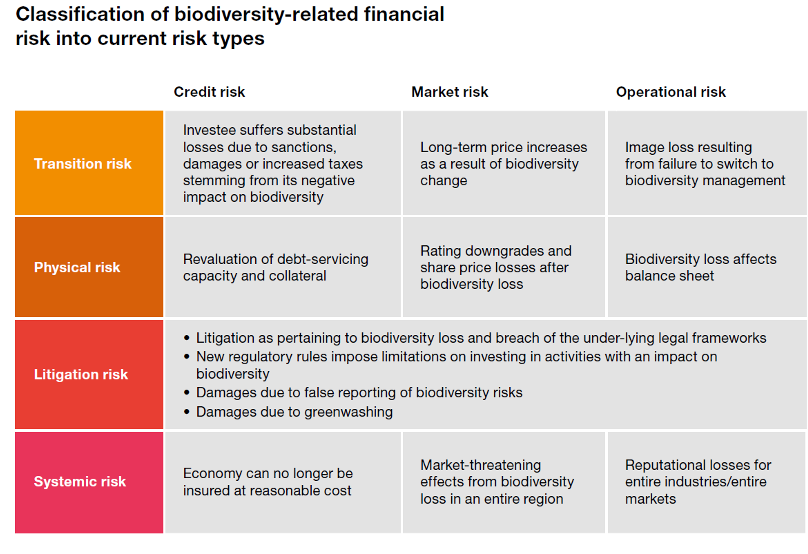 The Connections Between Climate Change, People and Nature

As noted above, climate change and nature loss sometimes share the same drivers. For example, deforestation can both destroy habitats that support biodiversity as well reduce nature’s ability to store carbon, which then exacerbates the effects of climate change.

But climate change itself is also a distinct and direct contributor to nature loss:

The scale of the impact of global warming on biodiversity depends crucially on how successful global emissions are limited, as outlined in the IPCC Special Report on Global Warming of 1.5oC.

The Impact on Diseases

If all of this isn’t enough to prove the importance of nature, a final point to consider is the implications for diseases.

One of the implications of the habitat loss and the enforced migration for animals is that interactions between humans and animals are set to increase over time. This is significant because it increases the likelihood of a ‘spillover event’, a moment when an infection or pathogen jumps from one species to another. As humans and animals that haven’t traditionally been in close proximity to one another are forced together as a result of climate change, interactions and thus opportunities for new spillover events are expected to rise.

For context, in the recently published Beyond Boundaries report, researchers have mapped the cumulative number of virus species affecting humans, noting that in recent decades, ‘approximately three to four new infectious diseases have emerged each year and the majority of these are zoonotic and originating from wildlife.’

In addition to the rise in novel infectious diseases caused by spillover events, it is also expected that we will see a rise in cases across a number of existing diseases. The most striking example of this is malaria, a disease contracted by 229 million people in 2019 alone.

Current research highlights how climate change increases the opportunities for malaria transmission. The increases in temperature, rainfall, and humidity we are already seeing as a result of climate change look likely to cause a proliferation of the malaria-carrying mosquitoes at higher altitudes, regions that historically have not experienced the disease. At lower altitudes where malaria is already a problem, warmer temperatures will speed up the development of malaria-bearing parasites carried by the mosquito, increasing transmission and thus having implications on the burden of disease.

As we have seen from the examples presented here, there are lots of ways that nature loss will make living on this planet harder. This will create new risks for firms, as well as exacerbate existing ones. The scale of predicted financial losses resulting from inaction on these issues is striking, making a clear case for nature loss becoming a top-of-the-agenda risk item alongside climate change, while also emphasizing the need to better understand the complex interconnections that exist between them.