The GARP Risk Institute’s deep dive on climate scenario analysis practices in financial firms was recently published on October 21st as part of the Climate Financial Risk Forum’s (CFRF) 2021 outputs, which are all accessible via this link. It provides valuable insights into the evolving use of scenario analysis to better understand and manage climate risks. GARP has been secretariat for the CFRF’s working groups on climate risk management and climate scenario analysis since the Forum was established in 2019 by the UK’s Financial Conduct Authority (FCA) and the Prudential Regulation Authority (PRA). The CFRF aims to build capacity and share best practice across financial regulators and industry, with guides written by industry for industry.

Climate scenario analysis is new for many firms, presenting distinctive challenges, such as access to the required data, modelling and resourcing. GARP promotes best practice risk management globally. But with climate-related risk, the market and expectations are fast moving, making it difficult for firms to understand the status of emerging practices or how good their own approaches are.

In 2019, the GARP Risk Institute ran its first global Climate Risk Management Survey (‘Survey’). For participating firms, it provided valuable benchmarking information; for others, it gave a useful snapshot of the range of practice across the financial system and the challenges and barriers that firms were facing. The 2020 Survey mapped out the continuing journey and the 2021 Survey showed evidence of a growing sophistication and improvement in the quantification of climate-related risks.

This section presents results of a deep dive on the maturity of climate scenario analysis practices in financial firms, based on the results from GARP’s Climate Risk Management Survey undertaken in Q2 2021. The 2021 survey comprised: 47 banks or building societies; 20 asset managers and 11 other firms (insurers, financial market infrastructure). Collectively, they have around $46 trillion of assets on their balance sheets, manage assets of close to $50 trillion and account for about $3.3 trillion in market capitalization. The firms in the survey operate and assess their climate-related risks in all regions of the world. Of these 78 firms, 55 (around 70%) reported that they have undertaken climate scenario analysis. The analysis presented in this deep dive focuses on the practices at these 55 firms; any percentages presented are of a total population of 55 firms, unless otherwise stated.

Use of climate scenario analysis

Survey participants were asked a number of questions about their use of climate scenario analysis, including if they had ever used scenario analysis, whether they used it regularly or just on an ad hoc basis, and the reasons for undertaking the analysis.

26 firms reported that they use it regularly, with 38 using it on an ad hoc basis (of which 9 firms use it on both bases). Of course, ‘regularly’ does not necessarily translate to a high frequency of analysis: one firm, for example, reported using it ‘regularly’, and yet the most recent time they had undertaken climate scenario analysis was in 2018. Judging by the spread in Figure 1, this is quite rare: 35 firms had undertaken scenario analysis in 2021, with a further 17 in 2020.

Firms reported a range of reasons for undertaking climate scenario analysis (Figure 2). The most popular reasons were risk identification and to assess the financial impacts of climate change. Firms also use scenario analysis to support their strategy development as well as to feed into external disclosures.

Moreover, scenario analysis is also used to assess the alignment of portfolios to a pathway, such as achieving “Net Zero” emissions or being consistent with a particular temperature warming (e.g. 2°C). The reasons noted under “other” included assessing capital adequacy, assessing their firm’s resilience to climate change, and building capability for a regulatory stress test. 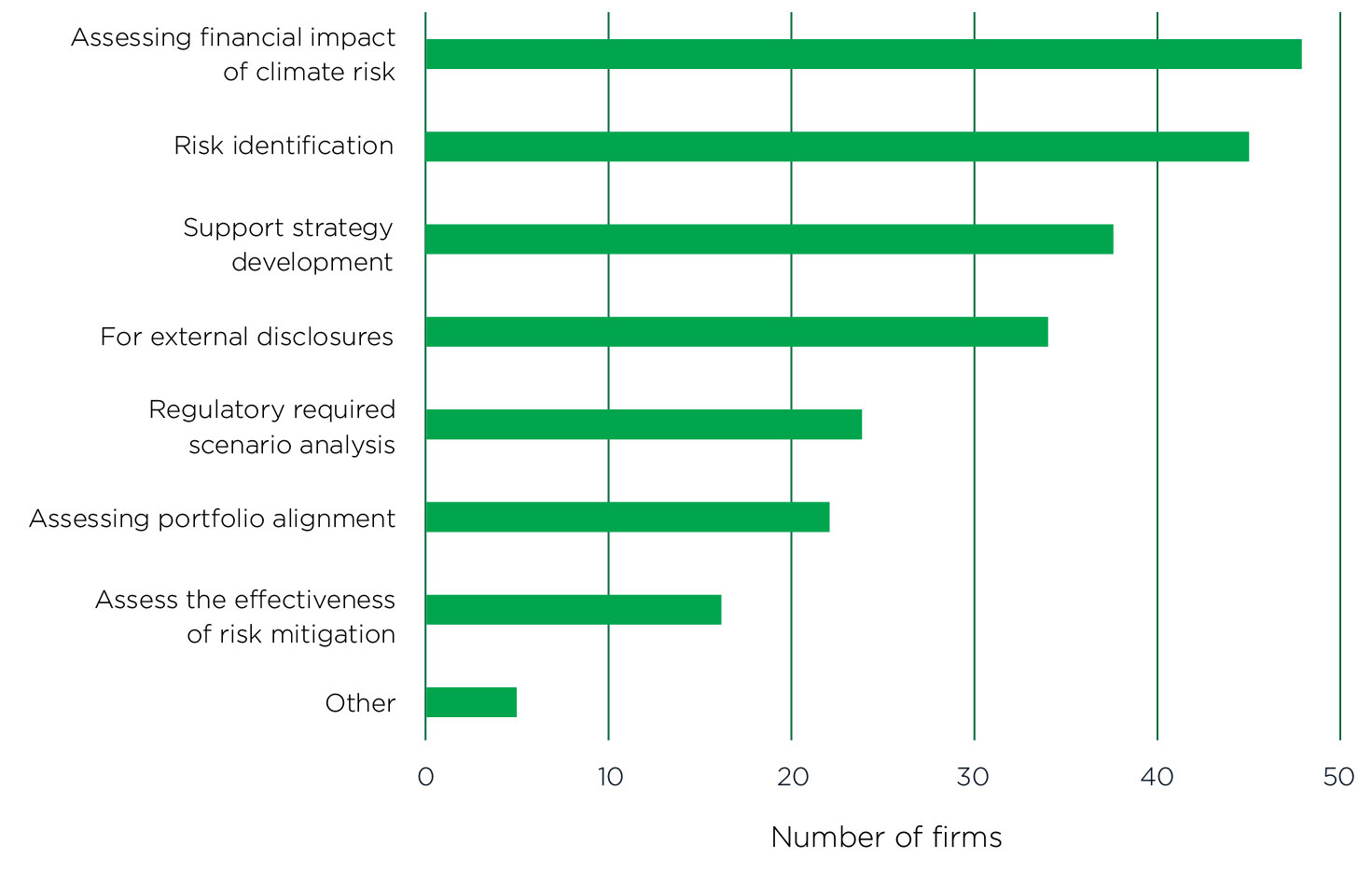 Firms were asked what their risk focus was when using scenario analysis (Figure 3). Most of the firms (52 out of 55) reported that they were assessing transition risk, with 47 firms noting that they assess physical risk. Greenhouse gas (GHG) emissions were assessed by only 28 firms. Although GHG emissions are commonly viewed as a rough proxy for exposure to transition risk, they do not capture all the potential effects of the transition to a low carbon economy.  Moreover, there are difficulties in getting reliable data on emissions across all counterparties, and even more difficult to get reliable profiles of future emissions, which is most relevant for assessing transition risk or alignment to a particular scenario.

Sections 4 and 5 of this chapter considers the two most popular risk focus areas, transition and physical risks impacts, for banks, insurance companies and asset managers.

As Figure 4 shows, the most popular time horizon for the scenarios used was 10 to 30 years. The longer time scales tend to be needed for physical risk assessments.

Firms can choose to use reference scenarios provided by third parties or to develop bespoke ones suited for a particular business. Figure 5 shows the range of scenarios used by the firms in this year’s survey. The “other” category tended to cover bespoke scenarios, which collectively was the second most popular choice. 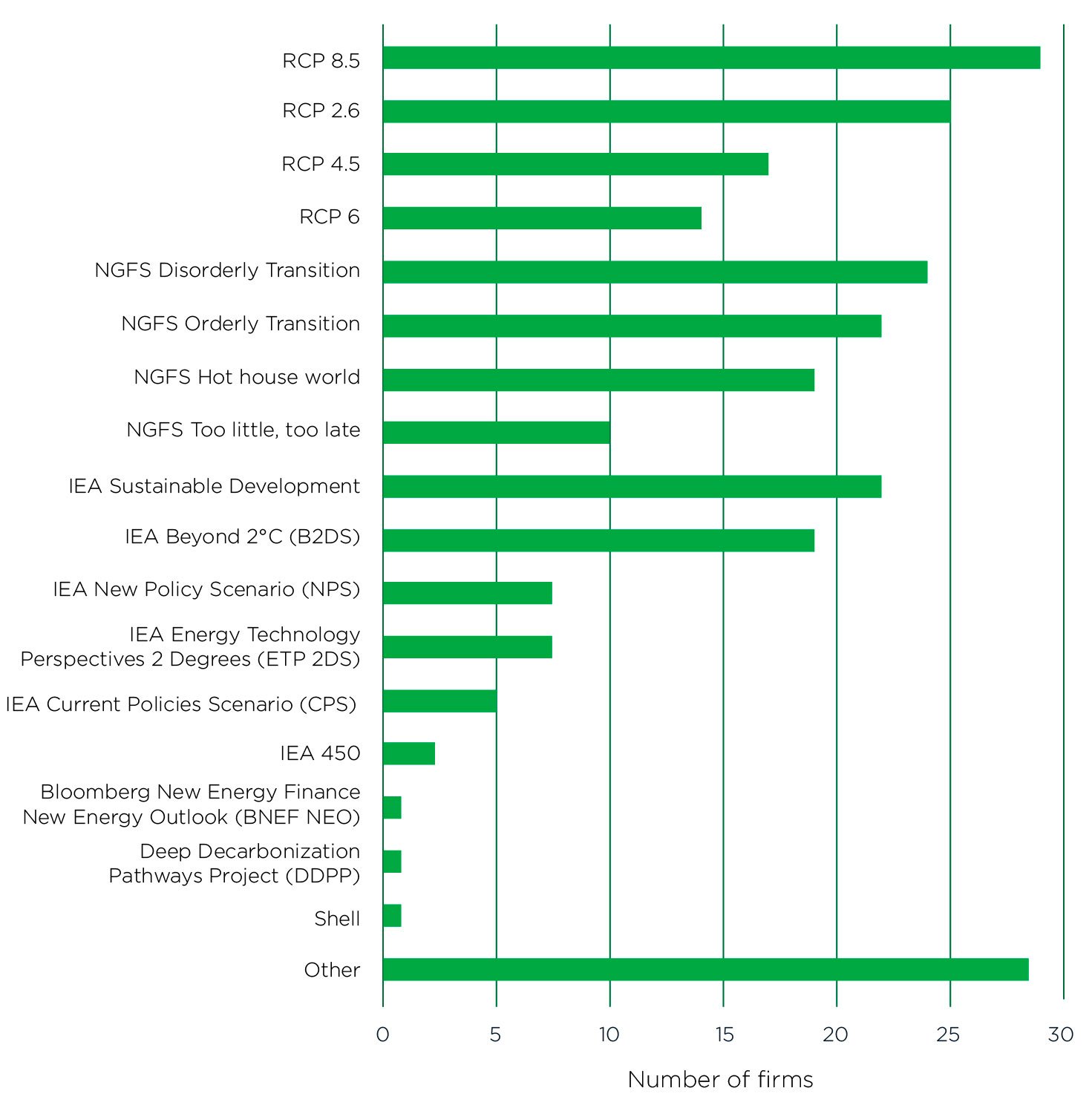 Section 3 of this chapter provides an overview of the latest NGFS scenarios and sections 4 and 5 consider how to use scenario analysis to evaluate transition and physical risks for banks, asset managers and insurers. Section 6 includes a case study on use of scenario analysis with respect to alignment of portfolios to a particular temperature trajectory.

There were a number of motivations for choosing a particular scenario (Figure 7). Covering the risks that could arise if the Paris Agreement objectives are met was the most common reason. Almost as common were scenarios where these objectives are not met, covering the risks that were expected if the current policy and business environment remain unchanged. Given the complexity of undertaking this type of analysis, it is perhaps not surprising that firms also chose scenarios that were simple, to help them learn.

Firms in the survey also noted a range of “other” reasons for choosing scenarios. These covered a range of motivations, such as climate scenarios set by supervisors, using sector specific pathways, insurance-related scenarios, as well as a desire to use internally developed scenarios and bespoke scenarios developed by consulting firms. 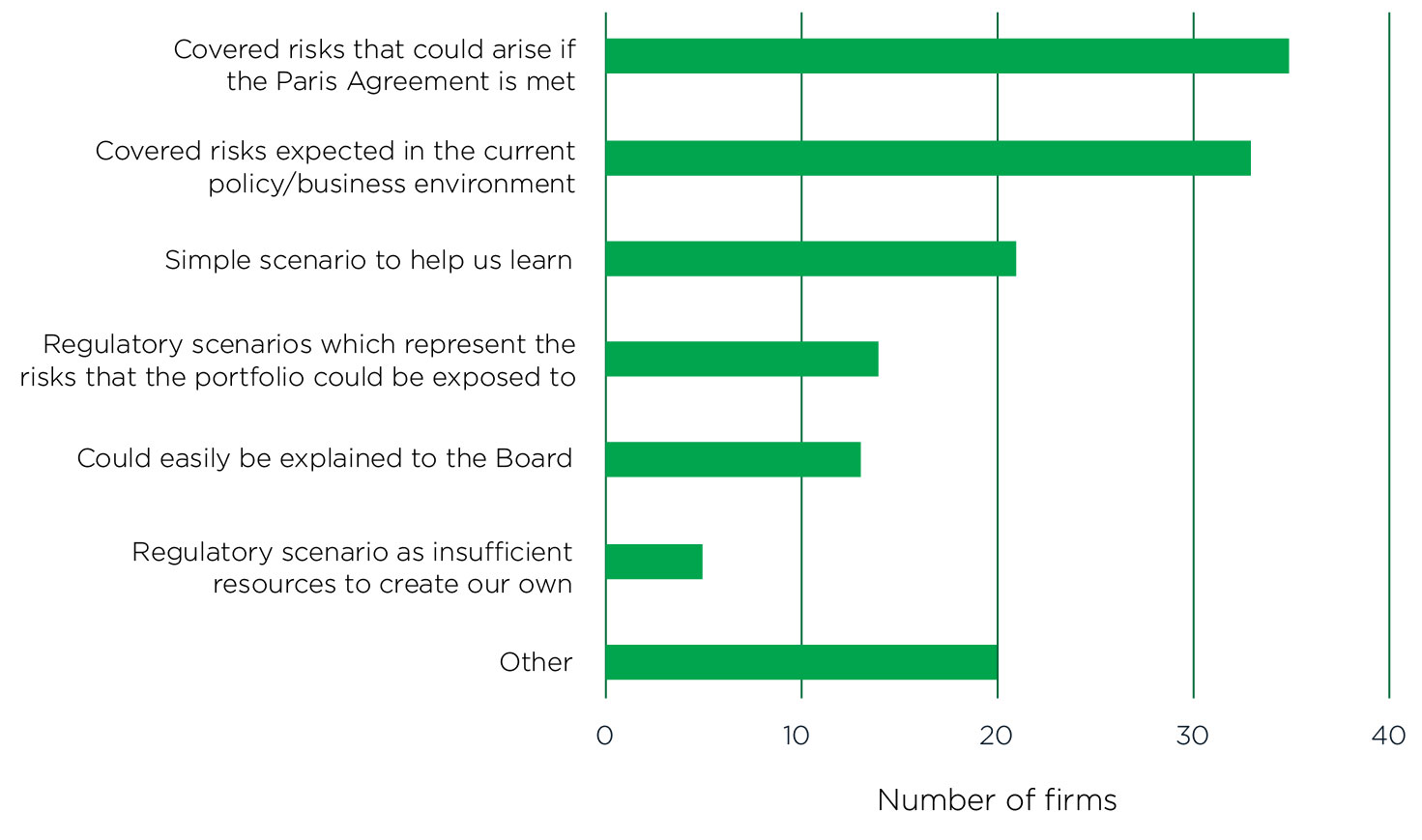 Firms might choose to run a scenario as a “baseline” against which to assess particular impacts. There is no established definition of a baseline, but a common approach is to define it as a scenario in which no mitigation policies/measures are implemented beyond those that are already in force and/or are legislated or planned to be adopted. Based on the insights from the GARP survey, the use of baseline scenarios is not yet well established across all firms. Out of 44 firms that responded to this question, only 20 reported that they did use a baseline scenario.  Section 3 of this chapter explores some key elements to consider when conducting scenario analysis including defining a “baseline” scenario.

Figure 8 shows the relative popularity of using different scenarios as baselines. The RCP 8.5 (a high physical risk scenario) is the most popular choice and can be useful as a baseline against which to assess the impact of other scenarios – such as those with lower physical risk and/or higher transition risk. The second most popular, the NGFS Orderly scenario, can be a helpful benchmark against which to compare with a less orderly transition or perhaps a higher physical risk scenario.

As with the data shown in Figure 8, a number of firms use “other” scenarios as baselines. These cover a range of practices including: 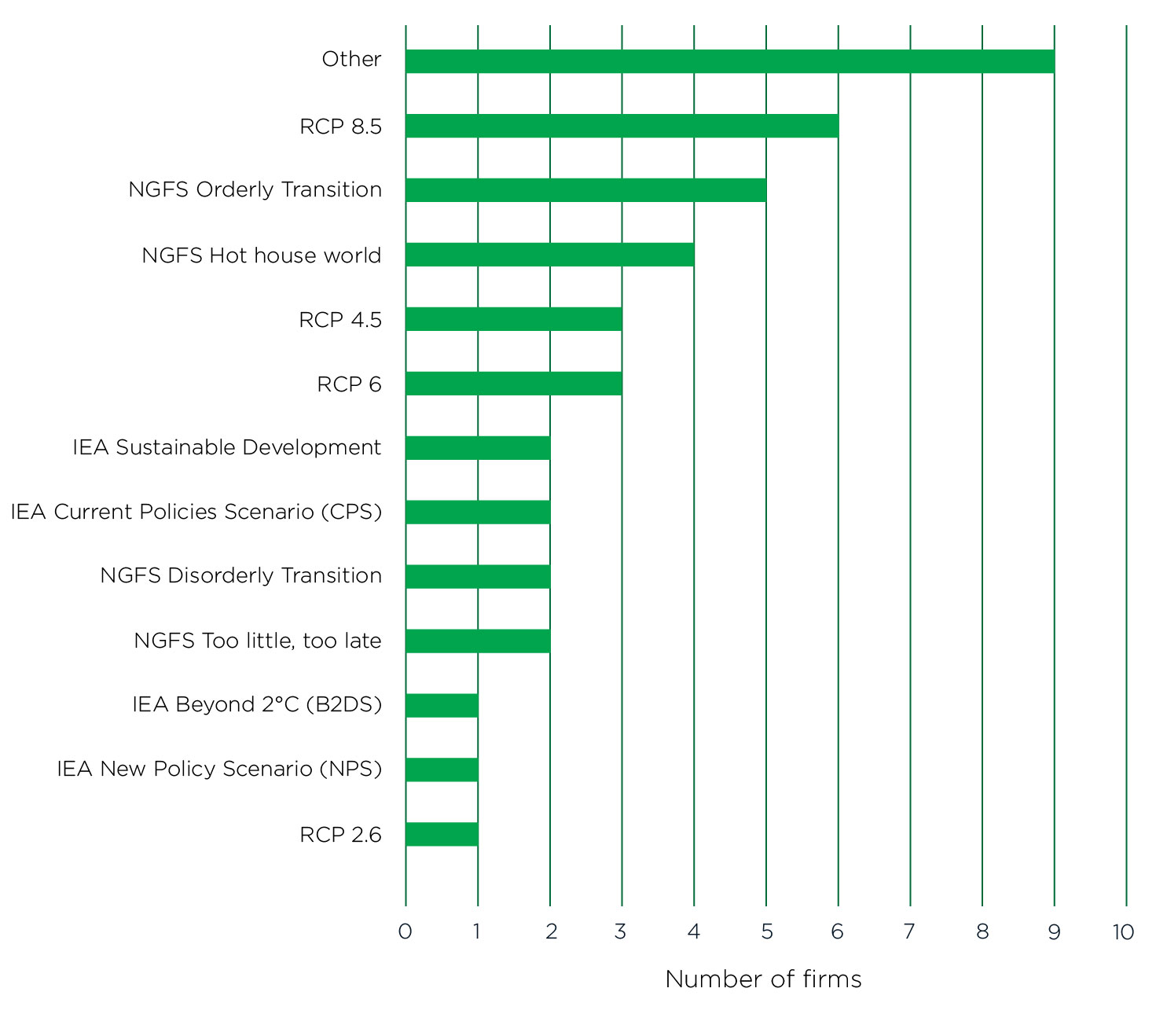 Whichever baseline scenario is chosen, it is important to recognise that this will affect the interpretation of the results. For example, transition risk will be emphasised if they are judged relative to a baseline scenario with high physical risk/low transition risk, such as RCP 8.5.  Some firms use multiple baseline scenarios, depending on the focus of their analysis (Figure 9). Most common is to use only one, but practice does vary.

Firms also have to decide on the scope of their analysis: for example, do they cover the entire portfolio or balance sheet, or focus attention on high priority areas? As Figure 10 shows, just over 80% of the firms focus on the most material exposures or portfolios, just marginally more than those citing climate-related risk considerations (e.g. highly vulnerable portfolios).

Scenario analysis is not an end in itself. Firms are increasingly evaluating actions on the back of the analysis, which then can lead to actions. The most common actions to be evaluated were whether there should be changes in the firm’s risk management, portfolio composition, disclosures, and organisational strategy (Figure 11). Section 6 includes a case study on how utilising scenario analysis can aid portfolio construction. The most common area where action was actually taken was to improve disclosures (at 20 firms), closely followed by a change in risk management (18 firms).

Figure 11: Actions evaluated and taken as a result of scenario analysis 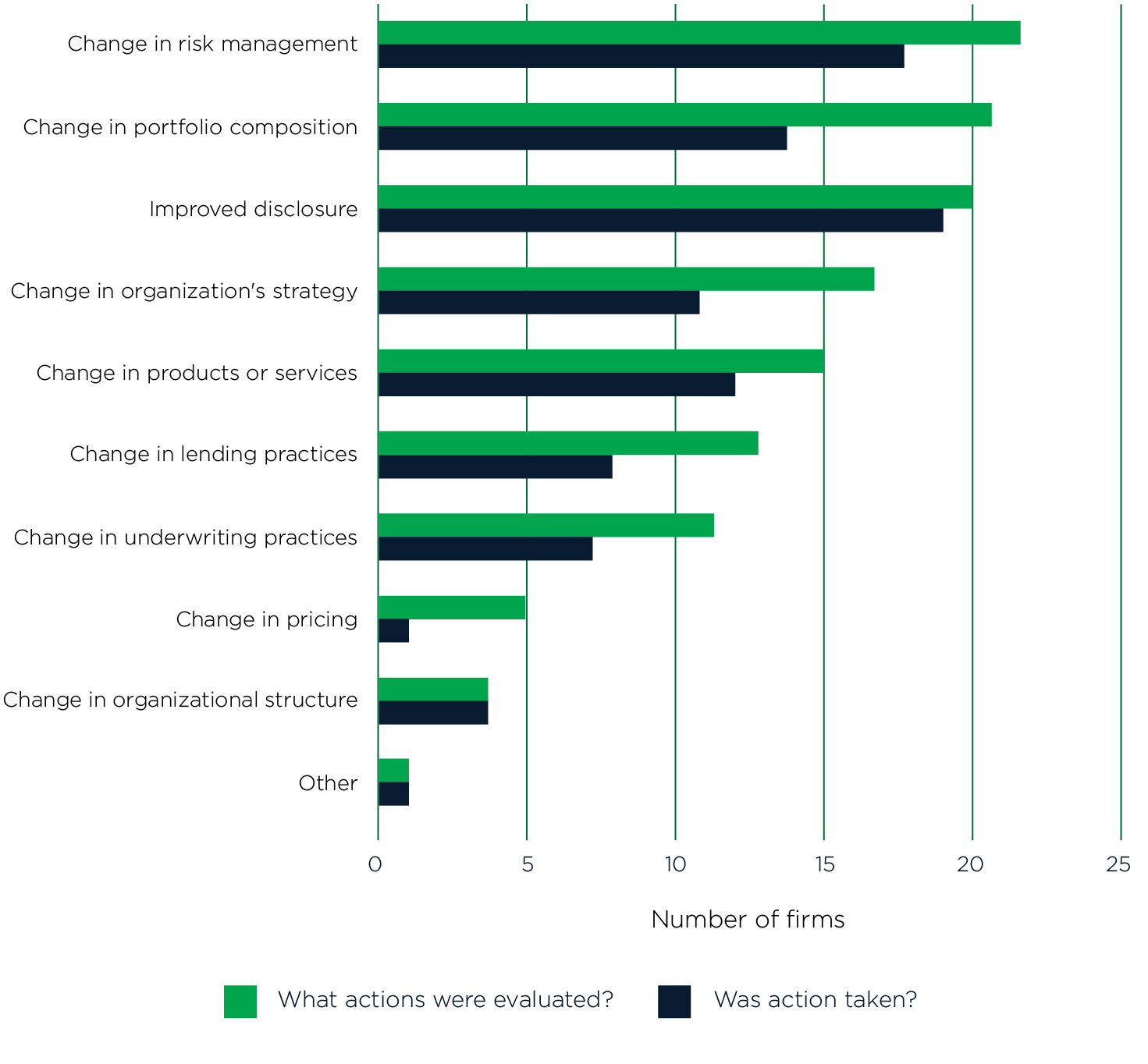 For many firms, climate scenario analysis is an emerging discipline, requiring new skills, data, methodologies, and time to build infrastructure. Given the pace of change, and the emergence of regulatory requirements, many firms are turning to external parties to accelerate their progress in this area. Indeed, only 21 firms use their own stress testing infrastructure, indicating the difficulty of integrating the new requirements within existing IT and modelling environments.

Most firms plan to partner with external organisations to undertake scenario analysis. As depicted in Figure 12, consulting firms are the most popular partners, cited by 48 firms, followed by independent research organisations (22) and universities (15).

There are a host of reasons why firms might choose to partner with these firms (Figure 13). Gaining knowledge and building internal capability was the most popular reason cited in the GARP survey (43 firms), closely followed by a desire to understand industry best practice (40 firms). At present, improving cost efficiency is not a particularly strong driver. 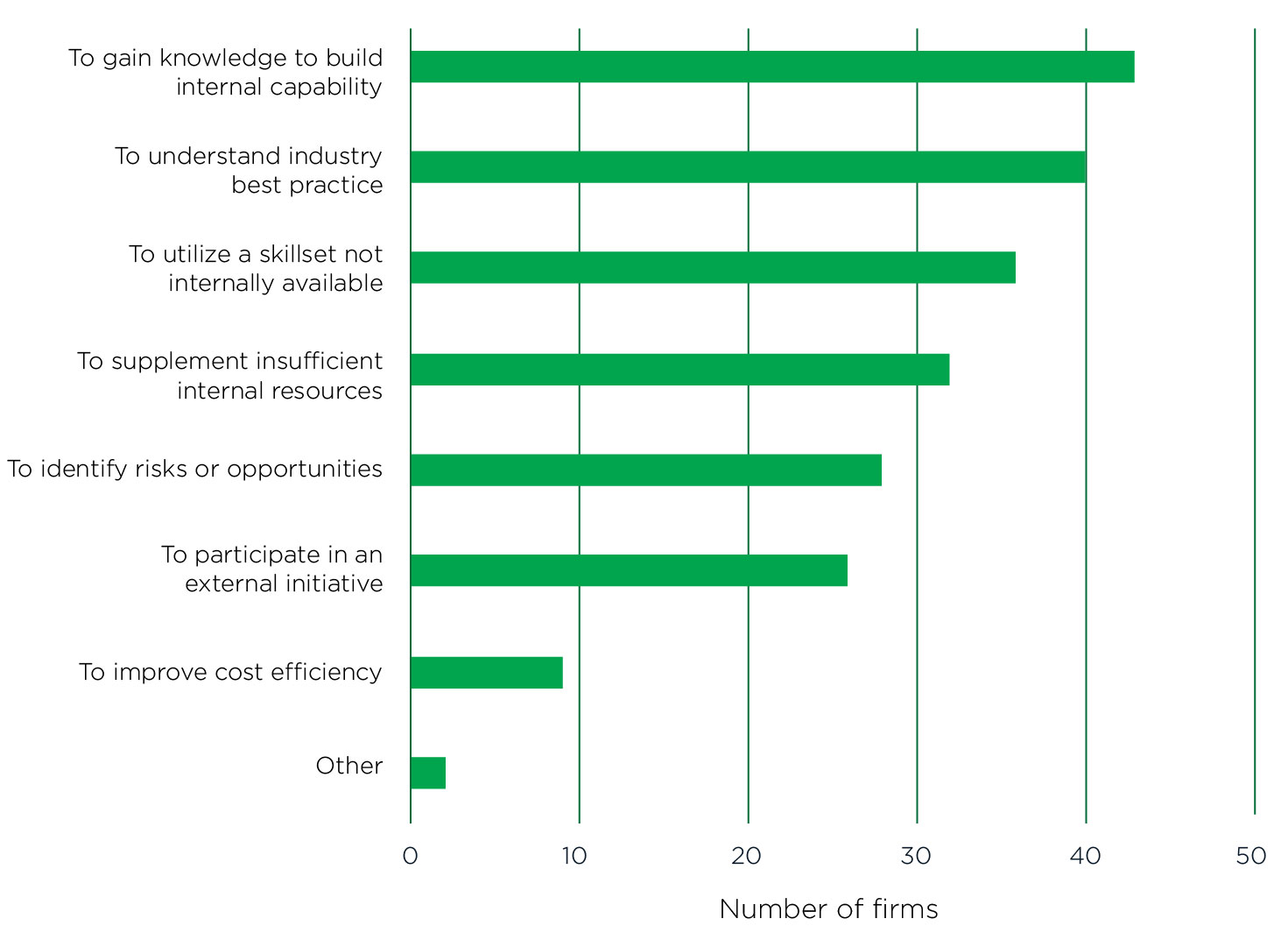 Around three quarters of the firms expect these relationships to be a short-term feature (less than five years) of their organization’s approach to climate-related risks. But the picture is made more complex by firms with multiple relationships of differing expected length.

One area where there is a clear message is that there is expected to be a significant use of specialist third-party technology or data support, as opposed to the more general third-party support outlined in Figure 13. Over 80% of the firms currently undertaking scenario analysis are expecting to use this. And an even larger percentage of the firms not currently doing scenario analysis do intend to use third party technology or data (Figure 14).

Figure 14: Planned use of third-party technology or data

Climate scenario analysis is new for many firms, requiring new skills, data, methodologies, and time to build the relevant infrastructure. But it is also a fast-evolving area, with increasing focus from a broad range of stakeholders who want to better understand financial firms’ vulnerabilities to the risks arising from climate change, as well as the implications of various strategic ‘alignment’ choices.

The GARP deep dive provides insight into the range of practice and the challenges involved in undertaking climate scenario analysis. It illustrates the reasons for undertaking the analysis, from risk identification and quantification to supporting strategy, improving disclosures, and assessing portfolio alignment. Most encouragingly, given that scenario analysis should not be an end in itself, firms report that they are using the analysis to evaluate and take action.

Given the pace of change, and the emergence of regulatory requirements, many firms are working with external parties to expedite their progress and build capability. Although firms still have a lot more work to fully establish climate scenario analysis practices, it is interesting to note that it is the category within GARP’s survey that has improved the most since the inaugural survey in 2019. The remainder of this report focuses on a number of practical use cases based on the findings of the GARP survey that financial institutions can learn from or apply.