Wealth Management: Is It Too Late for Early Warnings?

As we prepare for the next wave of geopolitical and economic shocks, and even a potential recession, should money managers stay the risk management course or take more proactive, protective actions? Standard data analysis is insufficient for forecasting adverse outcomes, but firms can generate helpful early-warning indicators if they consider investors’ risk tolerance and employ an empirical, multi-scenario approach to macro and market variables.

The typical advice from wealth managers or financial planners during a downturn is, “Don’t worry, the markets will recover, and we have a long-term strategy.”

That is true: they will recover eventually, but it might take longer than an investor can tolerate.

In recent history, one could rely on the historical pattern that U.S. equity markets recover over a 5-year horizon – even in, say, the wake of a recession. However, that might not be the case any longer. Consider, for example, that over the past 30 years, equity indices in Japan and Europe lost more than 30% of their value across different 5-year periods – and still haven’t recovered to reach their highest points (see Figure 1).

A similar scenario might play out in the U.S. market. Right now, however, these losses are in the range 15%-20% – which means that it’s not too late for risk mitigation based on early warning indicators.

The most important questions about these signals are whom to warn and what to warn them about. To address these issues, wealth managers must help investors understand their true risk tolerance. Just as importantly, they need to figure out the risk factors for which investors are likely to need early warnings.

Standard historical analysis is not adequate for supplying such data. Typically, this type of analysis either reduces all historical dynamics into two major parameters (expected outcome and the associated volatility) or tries to calibrate the tail of the distribution separately from the rest of the distribution.

When dynamics are reduced to expected outcome/volatility, historical analysis tends to underestimate the probability of stressed outcomes. Such outcomes are driven by extreme shocks that change the correlations between portfolio components. However, without factoring in such shocks (and their consequences), one cannot succeed in adequately capturing the most adverse outcomes with realistic probabilities.

Yet another problem with the standard portfolio analysis is that portfolio outcomes are not connected to both macroeconomic variables and the wider market environment. Without such a linkage, it’s hard to understand the nature of early warning signs.

Complicating matters further, even more sophisticated portfolio models that generate distributions of portfolio values at each point in time fail to produce early warnings, because the 95th or 99th percentiles at time t are not connected to the previous distribution at time t-1.

The Importance of Quantifying Risk Tolerance

Whichever methodology you employ must be able to identify the macroeconomic and market variables that are driving certain portfolio outcomes a few months in advance; without this information, it is not possible to construct early warnings specific to investors’ risk tolerance.

Indeed, identifying your level of risk acceptance is the first step in developing an efficient early warning system.

Rather than classifying investors by a broad model portfolio category, such as income, conservative and growth (with a few possible gradations in between), it’s important to identify these categories quantitatively. This means establishing how much investors can lose – with a specific probability – each year over the investment horizon. To make this determination, you must identify the worst drawdown of model portfolios (see Figure 2). 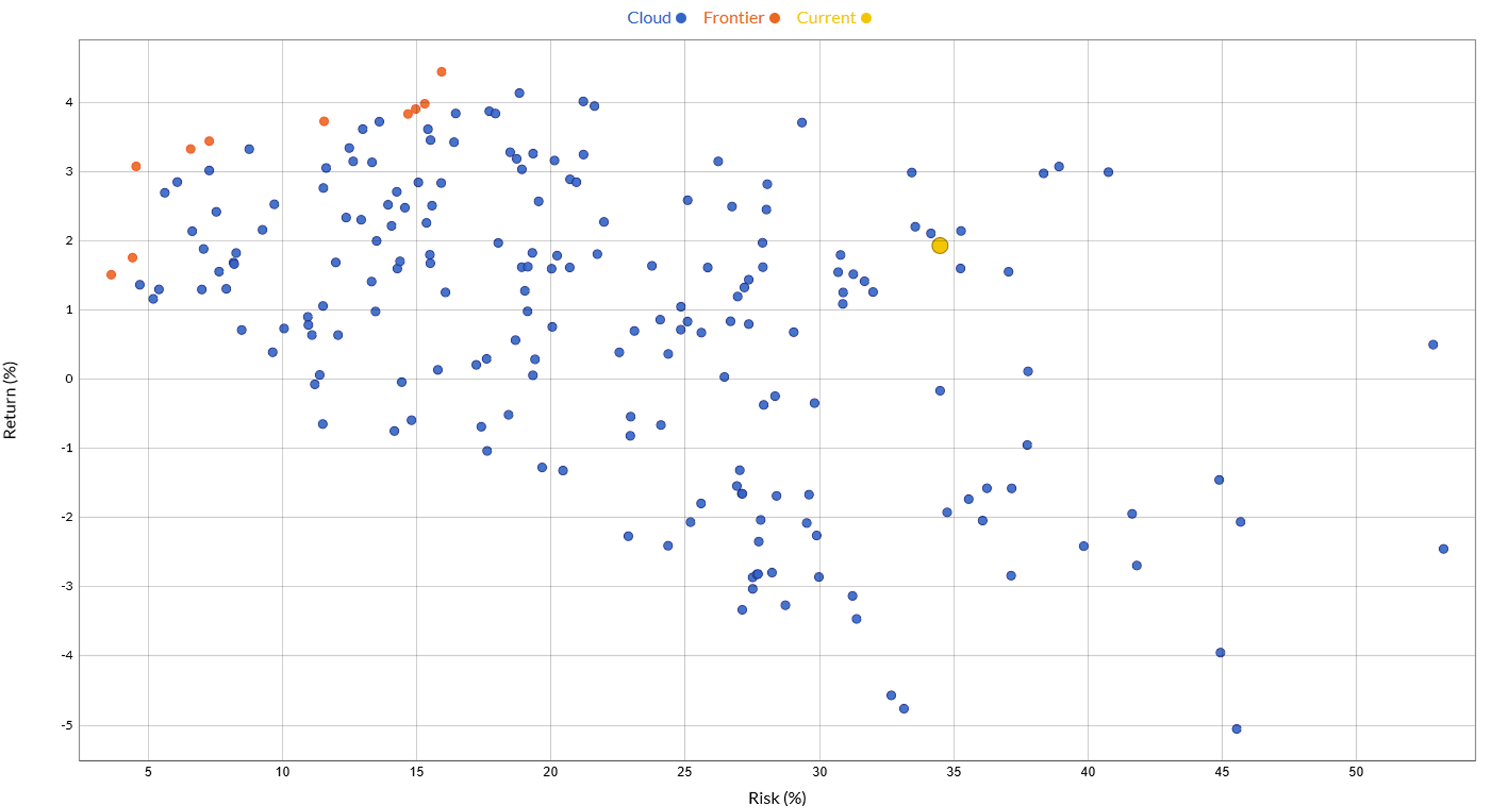 The yellow dot in the middle of the figure represents the typical portfolio – which can lose as much as 35% of value in the worst-case scenario, with an expected annual return of just around 2%.

In the efficient frontier (the orange dots), we can see that an expected annual return of 3% and above can be achieved with the risk of losing between 5% and 15% of the worst-case drawdown over the investment horizon.

It’s clear that the circled orange dots should not be selected as potential model portfolios for any risk tolerance, because they have 3%-5% drawdown, with an expected annual return below 2%. The green dot right above orange dots represents a portfolio with almost the same risk (just a bit over 5%), but with a substantially higher expected return.

Interestingly, even carefully selected model portfolios (with investment management based on extensive research) are not enough to prepare in advance for adverse outcomes.

Consequently, an additional step is needed: the identification of drawdown outcomes that increase in probability from 1% to, say, 10%, 15% or 20%. What macroeconomic and market drivers are closely correlated with such portfolio dynamics? It is critical to find them early, so that the model portfolios can be adjusted before it’s too late.

The only way to achieve this is through constructing an empirical portfolio distribution over time, via evaluating the portfolio on the full range of scenarios. This multi-scenario approach empowers investors to quantify their risk tolerance and to establish the proper level of risk exposure.

Figure 3 depicts a multi-layer distribution of portfolio values, with the red lines representing 1st percentile (worst-case) drawdowns. By observing the behavior of other variables on the same scenarios (highlighted in red), investors can identify the early warning triggers for proactive actions. 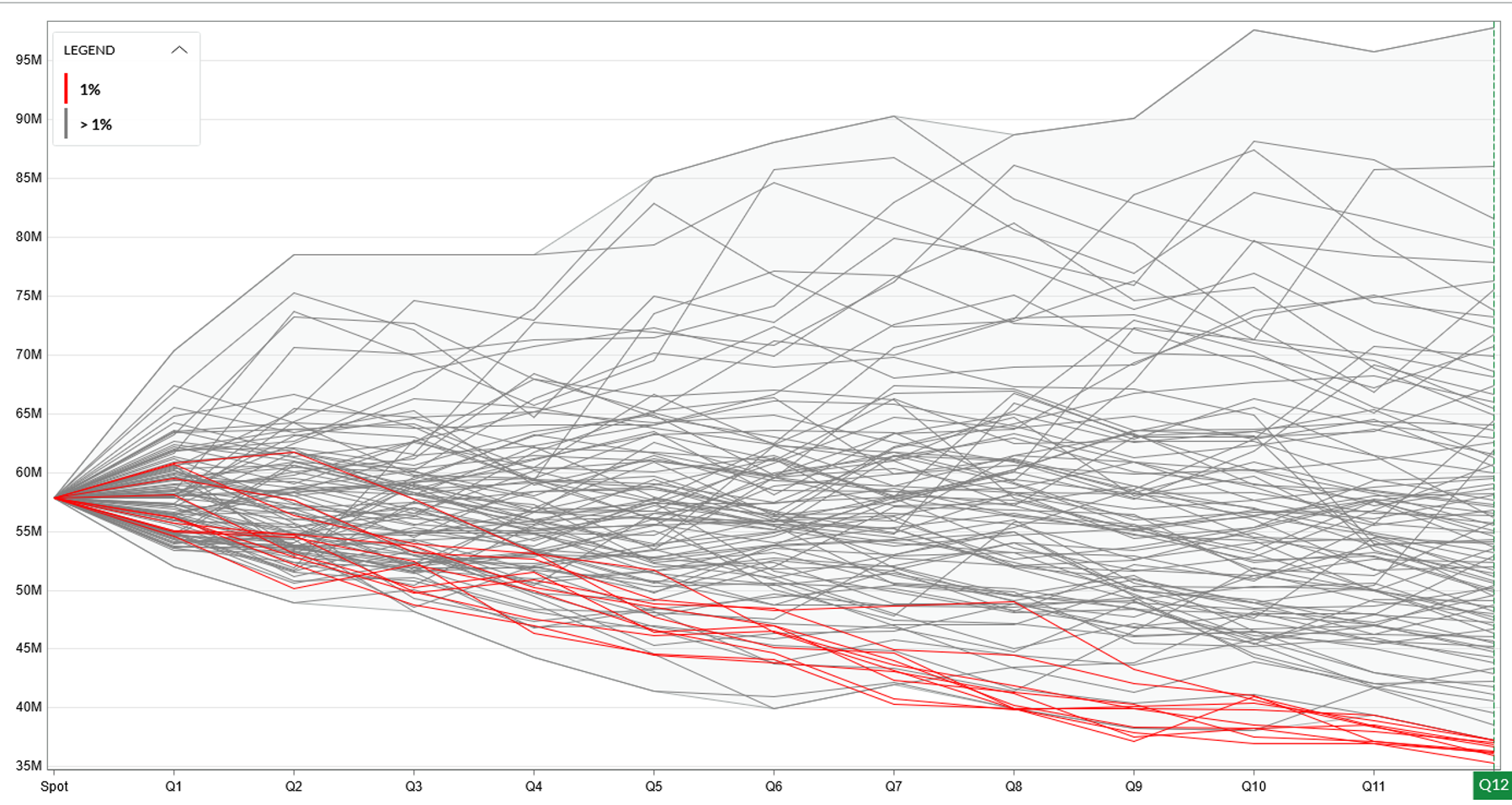 Empirical distributions derived from multiple scenarios have consistent dynamics through time, enabling investors to understand probabilistic properties of the outcomes. Moreover, using this approach, investors can establish their own tail risk boundaries.

Consider, for example, really bad scenarios (see the Q4 and Q6 scenarios identified by the pointed arrows in Figure 3) that are subsequently able to recover. After those scenarios are nailed down, you can decide whether to tolerate poor portfolio performance (if you’re optimistic about recovery) or to select another point on the efficient frontier of your model portfolio.

Early warning signals delivered through comprehensive scenario analysis (evaluating a multitude of variables) enables investors to stay the course with a potentially more aggressive strategy, waiting until triggers arise before changing their approach.

When those early-warning triggers kick in, the probability of intolerable risk (i.e., tail risk) increases substantially. It’s under those circumstances when you should switch to a safer (predefined in advance) strategy.

Even with U.S. market already down substantially from its peak, it’s not too late for establishing early warnings, as more geopolitical and economic shocks could very well happen, yielding an additional downward spiral.

Empirical distributions (derived from multiple scenarios) allow investors, their wealth managers and other strategic decision makers to not only protect themselves from unpleasant surprises but also to realign their portfolios proactively based on early warnings.