Awareness and Communication Are Keys to Climate Risk Management

Climate risks are hitting home. In Miami, home-owning retirees are considering relocating because of higher coastal flood risks. It's not illogical: More than half of U.S. hurricane risk is concentrated in Florida.

"Changes in lifestyle are contributing to risk," said Robert Muir-Wood, chief research officer of Risk Management Solutions, a leading source of catastrophe risk models for insurance companies and other financial institutions. "People are retiring and want to live on the beach, but the sea level is rising and Americans are becoming more aware of the risk from flooding" - which in turn is affected by where people choose to build.

The frequency of extreme events is also going up. There were 80 U.S. weather-related events that cost more than $1 billion each between 2004 and 2013, according to the National Oceanic and Atmospheric Administration. During the previous decade, there were 46 such events.

"There are things we can take action around, which include planning laws or the application of building codes, and also tracking whether extreme events are becoming more frequent or intense," said Muir-Wood, who is based in London.

"We did the modeling work for what can be expected around the future cost of hurricanes and hurricane storm surges," Muir-Wood said in an interview. In addition to sea levels, "factors contributing to the rise in risk relate to the increased wealth invested both in buildings and their high value contents, which are susceptible to water damage." 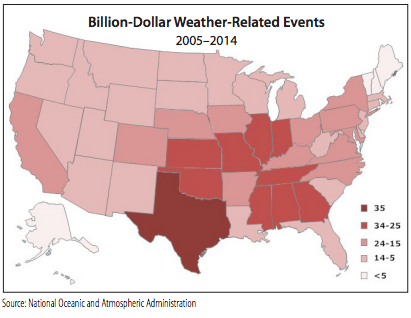 Leveraging the Internet is seen as a way to increase awareness and mitigating risk.

"Social media is an especially good vehicle for spreading messages that are hot or particularly pertinent, and climate change draws a lot of interest around Earth Day," said Shawna Ackerman, vice president of the American Academy of Actuaries Casualty Practice Council.

Ahead of this year's Earth Day (April 22) and after the release of an "Essential Elements" paper on climate change, the academy launched a social media campaign on Twitter, Facebook and LinkedIn to raise awareness of extreme weather and climate-related events and their increasing incidence.

"Our aim is to evaluate and help manage exposure to these risks from an insurance perspective," Ackerman said. "We do that by combining an objective perspective on what current climate science is telling us with our actuarial expertise."

Social media can also play a role in disaster management for real-time information-gathering when a disaster occurs - and ahead of it.

Nixle, for one, offers a platform for communicating disaster and security alerts in multiple media formats. "Warnings about hazardous events allow planning to be implemented before disaster strikes," Ward pointed out. 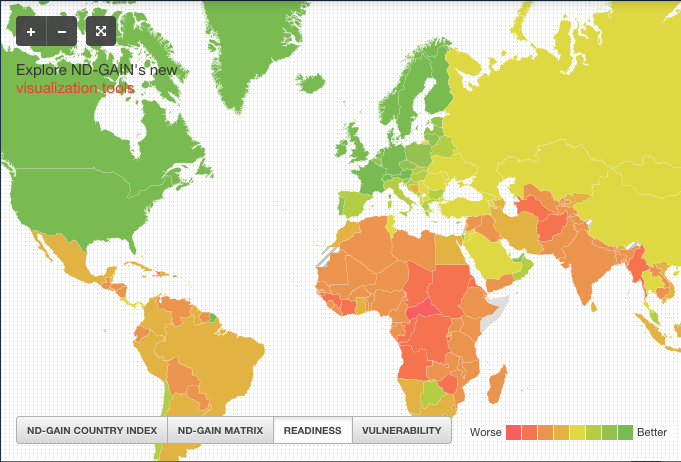 "All regions of the U.S. will be impacted by climate change, but places that already experience water stress, heat stress and economic challenges that limit the adaptive capacity of people and communities will probably feel the greatest impacts of climate change," said Jessica Hellman, associate professor of biological science at the University of Notre Dame and research director of the Notre Dame Global Adaptation Index (ND-GAIN).

ND-GAIN ranks countries according to their vulnerability, readiness to take action and readiness to reduce climate vulnerability. Internationally, Finland currently ranks highest in the ND-GAIN index country ranking, followed by New Zealand, Norway Sweden and Denmark. Australia, Austria, Germany, Switzerland and the U.S. (the last two in a tie) round out the top 10, with the U.K. next.

"Global climate changes are increasing average temperatures and accelerating the hydrological cycle, making it both wetter for storms and drier for drought under a warmer climate," Hellman said.

The American Academy of Actuaries is one of a group of North American organizations behind development of the Actuaries Climate Index (ACI) and the Actuaries Climate Risk Index (ACRI), which is a gauge of frequency and intensity of extremes in key climate indicators based on controlled observational data of temperature, precipitation, drought, wind, sea level and soil moisture.

"We hope that the information will enhance discussions about these risks and how to manage them," said Ackerman. "Better managing these risks can mitigate financial losses and ultimately save lives."

For example, in view of the drought and wildfires in California, agricultural businesses and water districts are opening up to solutions like those of CalCom Solar that "help growers understand the impact of electricity costs on their water management and agricultural operations," said Nic Stover, CEO of the ag-focused solar energy systems company. "The data is used to devise an energy approach that deploys optimized solar arrays, which are specifically designed to make energy and water use as efficient as possible."

Other industrial and public adaptations include construction of sea walls to protect shoreline assets; paving of roads to ensure access to jobs, schools and healthcare facilities; integrating new seed varieties; and installing irrigation systems to manage precipitation and temperature changes.

"Corporations that want to make a positive difference have a role to play beyond their own business risk," Notre Dame's Hellman said. "They can work to fill a massive adaptation financing gap around the world, which is expected to reach more than $100 billion a year by 2050. In doing so, they can help preserve healthy people, ecosystems and possibly even demand for their goods and services."

Referring to the actuaries' social media campaign, Ackerman added, "A new business located in an area prone to flooding certainly would be interested to know about that risk, and all businesses in that area would be interested in how that risk might be changing. Organizations first need to be aware of these risks to address or account for them in their planning."

Managing Commodities Risk: A Compliance Guide for the Next Wave of Spoofing Enforcement
Jun 23, 2016 12:00:00 AM