Managing Remote Workforces: It's Still All About the People

Risk and compliance professionals, among others, grapple with work-from-home challenges and see some upside

Spyro Karetsos was hired as Google's chief compliance officer more than a year ago, but he has not yet actually gone to work - to the office, that is.

In fact, everything from the interview process to his October 2020 start date, taking place amidst the COVID-19 pandemic, was handled remotely.

He also has not met his boss nor his team in person.

It's quite a departure for an executive who describes his management style as hands-on.

It has been a “unique” experience, said Karetsos, who joined the Silicon Valley giant from TD Ameritrade, where he was chief risk officer before the firm was acquired by Charles Schwab Corp. last year.

It wasn't all that long ago that this version of virtual reality would have been unthinkable. Pre-pandemic, even Silicon Valley companies, considered cutting-edge when it comes to corporate culture and workplace flexibility, expected many employees and certainly C-suite executives to show up for work in real life.

COVID changed all that, and what became known as working from home or working from anywhere has gone on for far longer than had been expected at first. More recently, the Delta variant threw a wrench in many organizations' plans to bring people back.

Google in August extended its “voluntary return to office” policy into 2022 and, in September, signaled its future intentions by saying it would spend $2.1 billion to buy a New York City office building.

For a growing number of other companies, including Facebook and Twitter, the remote-work option remains open-ended if not permanent.

The various approaches have been redefining the way people work, risk and compliance professionals included. They have had to regroup and reprioritize; be on high alert for risks on the rise; and rely on technology and virtual communications more than ever to stay connected, reinforce corporate culture and community, and just get the job done.

“The first area that has greatly changed the way I work is no different from any of us spending time working remotely - the clock is much different than it once was,” he said.

“A mere two years ago, there was absolute distinction between the beginning and end of one's day,” Fabara continued. “We would commute into the office and log in once there. When wrapping up for the day, we would log off before the commute home. Now the days are not nearly as definite, allowing for greater flexibility but also making working hours longer.”

Technology, too, has cut both ways, making remote work possible and, at times, more exhausting. Even Zoom chief executive Eric Yuan, at a May Wall Street Journal CEO Council Summit, confessed to having experienced Zoom fatigue.

And there are always issues that keep risk and compliance executives up at night.

“The pandemic also changed the payment ecosystem Visa works to protect,” Fabara remarked. “Payments is among the industries that has undergone the most change during the pandemic, with digital adoption that we anticipated taking five to 10 years happening essentially overnight. Many brick-and-mortar institutions now have an online presence to maintain their business.

“At the same time, fraudsters have taken advantage of this digitization by targeting weak payment security defenses and technology gaps to defraud financial institutions, merchants and consumers.”

Fabara's stress reliever is sports. “I have found that having a routine outside of work is beneficial for my sanity,” he shared. “Taking the time to unplug and play a bit of soccer offers a very necessary reset.” He encourages others to adopt regular routines outside of work because “the stability and clarity of mind offered by a routine is only there if you are consistent.”

Debates over how to proceed are ongoing, with employers on different pages about whether to go with a full office return, remain in remote mode or maintain a hybrid model. Citigroup CEO Jane Fraser, for one, supported flexibility in a March blog post.

BlackRock has said that starting November 1, it expects more than half its employees to be in the office at least three days a week. With a Future of Work pilot program, the asset manager will “gauge how well U.S. and European employees can collaborate while allowing as many as two days a week of remote work,” Pensions & Investments reported.

A study published in September of 61,182 Microsoft U.S. employees, conducted in collaboration with the University of California at Berkeley Haas School of Business, concluded that “working from home caused workers to become more siloed in how they communicate, engage in fewer real-time conversations, and spend fewer hours in meetings.”

For Karetsos, not being in the office took some getting used to: “You don't hear the rumbling that might put your radar up. You don't get any of that remotely.

“But if anyone was well positioned for going fully remote during the pandemic,” he went on, “it was the tech industry.”

Google continues to use its tool sets enabling colleagues to communicate and collaborate, and keeps coming up with creative ways to build community, the compliance chief commented.

The company, whose parent is Alphabet, has been sponsoring “homesites,” with time blocked out on people's calendars, Karetsos elaborated. Virtual sessions are kept small; can be cross-discipline and include senior executives; and are run like regular off-sites, complete with ice breakers, bonding, social hours and the like.

Free from commuting, Karetsos said he is “more productive” and has “more time for family,” adding, “The balance of my life has shifted to positive.”

A Glassdoor analysis showed the share of job searches for remote work jumped 460% between June 2019 and June 2021, with interest predating the pandemic and expected to stay strong. 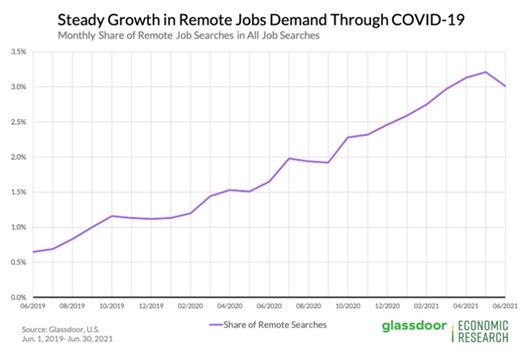 Harvard Business School professor Prithwiraj (Raj) Choudhury, who's been studying work from anywhere since 2015, maintained in a June podcast that the pandemic made this movement “mainstream.”

“A key new opportunity has been more meritocratic hiring,” Visa's Fabara contended. “With many companies offering hybrid or full-time remote work, companies can hire talent in locations that would not have normally been considered.

“This can help drive diversity for organizations and create a more inclusive culture,” he added.

Google has been “hiring through this cycle,” Karetsos pointed out, “with the hiring, interviewing, onboarding and orientation all done remotely.”

The executive explained that "candidates outside Silicon Valley are now applying for risk and compliance positions without concern for relocation risk." He also noted that the company pairs new people with mentors and peers - even outside of their departments - so they get a "multitude of perspectives on the cultural expectations of the company and the way we operate."

“For people managers,” Fabara advised, “it is crucial to avoid the 'out of sight, out of mind' syndrome, where individuals are left behind due to hybrid or remote work. This can negatively impact team productivity and individual fulfillment.

“It is more important than ever to ensure that employees feel they are part of a team or community.”

In a November-December 2020 Harvard Business Review article, Choudhury posited: “The question is not whether work from anywhere is possible but what is needed to make it possible. The short answer: management.”


L.A. Winokur is a veteran business journalist based in the San Francisco Bay Area.