U.S. Securities Industry Gets Behind Plan to Curtail Settlement Risk

Robinhood and other brokerages restricted trading last January in GameStop and other so-called meme stocks when they faced significant capital calls by Depository Trust & Clearing Corp.’s National Securities Clearing Corp. Robinhood met those calls, but their cost would have been much lower if the trades settled faster, leaving them less exposed to the risk of failing.

Now operating on a T+2 (trade date plus two business days) settlement cycle, which was shortened from T+3 in 2017, the U.S. securities industry is eyeing a T+1 future. A February 2021 DTCC white paper made the case for next-day equities settlement, citing potential cost, capital and operational efficiencies while also not minimizing the complexity of the industrywide coordination necessary to complete such a move within two years.

“Time to settlement equals counterparty risk, and margin requirements, which are designed to mitigate those risks, represent cost to members,” DTCC managing director Murray Pozmanter wrote in a foreword to the report. “We believe the most logical way to reduce the risks that drive margin requirements is to shorten the settlement cycle.” 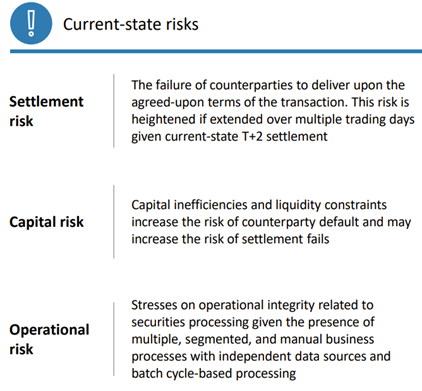 With DTCC concurrently spearheading a market-infrastructure modernization initiative embracing new and faster digital capabilities and standards, T+0 and real-time gross settlement are hardly out of the question. However, according to the white paper, as appealing as that may be in theory, market participants “have indicated that they are unprepared for such a significant change, as it would require a fundamental restructuring of operational processes throughout the industry.”

Trade Associations On Board

For T+1, the DTCC, Investment Company Institute (ICI) and Securities Industry and Financial Markets Association (SIFMA) held a series of workshops for subject matter experts from across the financial industry. In an August letter to Securities and Exchange Commission Chair Gary Gensler, those organizations asserted that the shift to T+1 will mitigate risk “well beyond what was achieved under T+2,” and “some of the issues involved in shortening the settlement cycle will need fundamental behavioral, technological, and regulatory changes.”

Their bottom line was that “these issues will not prevent an industry move to T+1,” and they vowed to “ensure as seamless a transition to T+1 as possible.”

An analysis that was to be completed by the end of the third quarter resulted in a December 1 report "targeting the first half of 2024 to shorten the U.S. securities settlement cycle."

“They looked at the lifecycle of trades all the way through to settlement, and all the different parts of that process that have to be addressed to make sure that they can be done in T+1,” said Adam Gilbert, a partner in financial services, risk and regulation at PwC, who is closely following the project.

Although same-day settlement occurs in certificates of deposit and commercial paper, and government securities and options settle in T+1, the letter to Gensler said that “same-day settlement is more complex than simply removing an additional day from the cycle and would require re-engineering how securities trade and settle.”

That would include “a redesign of areas such as global settlements, FX, margin investing, and securities lending to meet regulatory and contractual requirements in less than 12 hours, where today it takes more than 24.” It also “could require industry stakeholders – including the Federal Reserve’s payment systems – to maintain services much longer during the day, which could increase the potential for failure.”

Distributed ledger technology (DLT), or blockchain, may offer a path to T+0. DTCC has completed a proof of concept in its Project Ion. 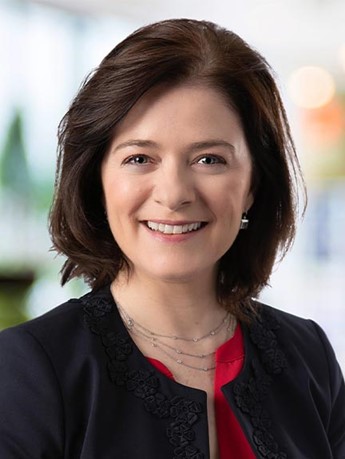 DTCC’s Michele Hillery: “An opportunity to further reconfigure and optimize the technology.”

“We believe now is the right time for the change,” said Michele Hillery, DTCC general manager of equity clearing and DTC Settlement Service, who spoke on “The Road to T+0” at the SIBOS conference in October. “While the industry is pushing hard towards achieving T+1, we shouldn’t stop there . . . Shortening the settlement cycle also presents an opportunity to further reconfigure and optimize the technology. For example, through Project Ion, DTCC has been advancing the possibilities of a netted T+0 solution, with an effective use case for settlement using distributed ledger technology.”

Uday Singh, managing director, head of professional services at Broadridge, sees a T+1 transition taking place between fourth quarter, 2023 and second quarter, 2024. “The regulators are moving quickly, and while we see some delays in expected timing, we don’t think it will drag out,” Singh said.

That means firms should budget to begin making operations and technology changes in 2022, ahead of testing in the first half of 2023. Singh said firms must address what those changes will involve and their cost; how T+1 will impact their balance sheets from a capital requirements perspective; and revenues from services such as securities lending.

“This understanding is key, since both investors and CFOs are going to start asking these questions,” he said.

Time-sensitive issues that require more extensive changes, the letter said, are both procedural and behavioral. They include allocations, affirmation and disaffirmation processes, clearinghouse processing timelines and securities lending. In addition, the industry will have to identify the causes of settlement errors and fails and how those can be improved through automation and behavioral changes, while ensuring the more compressed timeframe doesn’t inadvertently increase the rate of errors.

Singh said the change to T+1 will be “much greater,” and will be more dependent on automation, than was going from T+3 to T+2 four years ago. At that time, European equities had already been at T+2 settlement for three years. Implications for T+1 in Europe were covered in a recent panel discussion that included Robert Cavallo, DTCC director, DTC Settlement Product Management. India will begin phasing in T+1 early next year.

“In the current T+2 window, you still have enough time – although barely – to fix and recover from systematic failures,” Singh said. “Under accelerated settlement, that systematic failure could possibly delay starting the trading day and could be catastrophic to a firm in times of extreme market stress.”

DTCC sees Project Ion ultimately addressing such issues. It announced September 15 that the platform will be launched in first quarter, 2022 and will “serve as a parallel book and infrastructure for limited bilateral transactions on DLT, with DTC’s existing systems continuing to remain the authoritative source of transactions.” The functionality will be introduced in phases, subject to regulatory approval.

“The industry’s primary goal must be to create efficiencies without introducing additional risk to markets, and client participation and feedback at every iterative step of this journey will be pivotal to the continued success of the platform,” Hillery said. “Project Ion holds the promise of new settlement functionality supported by robust technical capabilities and is a key part of our ongoing efforts to further accelerate settlement and build upon current same-day settlement capabilities.”