Thanks to regulatory revisions, optimistic day-counting systems for loans are now a thing of the past, default reporting has improved and banks that rely on IRB methodologies must recalibrate their PD and LGD models.

Throughout 2021, European banks have devoted considerable time to reassessing and recalibrating their probability-of-default (PD) and loss-given-default (LGD) models. Consequently, irregularities in banks’ treatment of loans (particularly with respect to missed payments) have been repaired and defaults are now being accounted for more accurately.

For European banks that rely on internal-ratings-based (IRB) methodologies, the recalibration of PD and LGD models must be completed by the end of 2021 - to comply with so-called “IRB repair” the European Baking Authority (EBA) mandated in the aftermath of 2020 changes the regulator made to its definition of default (DoD). But why is the new DoD considered an improvement, and what challenges have banks faced along the way to compliance with the EBA’s new credit-risk guidelines for DoD, PD and LGD?

To address these issues, we must first understand the differences between the old and new default definitions. Under the old (pre-2021) DoD, there was no concrete standard for European banks’ treatment of missed payments of loans. Banks could, in fact, choose between a first-in/first-out (FIFO) and last-in/first-out (LIFO) approaches. This led to some confusion, as banks took divergent paths for treating the most important criterion for the default of a loan: 90 days past due (DPD).

The FIFO approach, which was used frequently, called for banks to apply each new payment on a loan in arrears to the oldest missed payment. As we’ll explain in more detail below, this often resulted in a failure of banks to flag for default loans that were 90 DPD.

In contrast, the new DoD requires banks to use a more realistic approach that no longer accommodates FIFO. It has effectively repaired day-counting loopholes (see CRR, article 178) that led to under-reporting of defaults.

Day-Counting Overhaul: Out with the Old

Before the implementation of the new DoD, the European Mortgage Foundation wrote that the previous guidelines ignored “the existence of different practices in the treatment of missed payments - i.e., how incoming cash flows after a default situation should be treated in relation to the previous instalments that are in arrears.”

Using the optimistic FIFO approach under the old DoD, banks were significantly reducing their number of defaults, and the need for day-counting harmonization eventually became clear. To better understand the inefficiencies of the old DoD, let’s consider an example loan.

For simplicity’s sake, let’s assume that there is a loan with a payment required every 30 days. Suppose also that, in our case, the client has to pay a fixed amount (interest and amortization) and that he or she has missed this payment at day 0. Finally, let’s assume that the client hasn’t missed any further payments, but that the sole missed payment exceeds the relative and absolute thresholds (so that it can trigger a default).

In our example, when applying a FIFO scheme (again, oldest missed payment comes first) under the old DoD, it is possible to have a missed payment that fails to trigger a default under the 90 DPD criterion, even as it gets older and older (see chart, below).

Comparing and Contrasting Day-Counting Under the Old and New DoDs 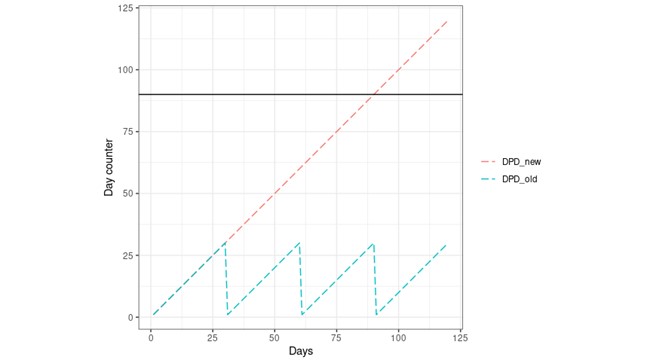 In simple terms, the FIFO approach “wipes out” earlier missed payments, which either leads to a later identification of defaults or no default trigger at all.

Prior to the implementation of the new DoD, FIFO practices at banks were widespread. Indeed, in the EBA’s 2016 QIS report, more than half of the banks surveyed were using FIFO.

The new DoD no longer allows for optimistic (FIFO-driven) day-counting methods. The DPD counter is instead based on any missed payment at the date that it was due. “Where any amount of principal, interest or fee has not been paid at the date it was due, institutions should recognize this as the credit obligation past due,” the EBA Guidelines for the new DoD state very clearly.

In short, what this means is that under the day-counting scheme of the new DoD, banks are more likely to identify when a loan is in default, because a default will certainly be triggered when a loan is 90 days past due.

If we take a fresh look at our loan example, under the old DoD, a loan may not be considered in default when it is 100 DPD – because, again, under the FIFO scheme, each new payment fulfills the oldest missed payment. (If the oldest missed payment is from 90 days ago, the clock “resets” when a new payment is made, and a loan that is actually 100 DPD is considered only 10 DPD after that initial payment.)

In contrast, if a firm were to take the new DoD approach, there would be an “old” missed payment at day 0 and the day counter at 100 DPD would then be 100 - triggering the 90 DPD criterion for default. The day-counting convention in the new DoD is so logical that it is a surprise that it has ever been different.

The new DoD has had a far-reaching impact, requiring, for example, PD and LGD models to be reassessed at European banks. Specifically, to determine whether the performance of its models has deteriorated, each bank must conduct a backtest of default data under the old and new DoDs.

Recalibration is required if the test shows a significant difference in a bank’s number of defaults under the two schemes. Backtesting and recalibration exercises, moreover, must be validated.

Under the new DoD, most banks have seen their PD increase and their LGD decrease. Some banks have also reported a positive capital impact, but exactly how the revised DoD will influence banks’ capital requirements is still to be determined – and will depend, in part, on whether increasing PDs and lower LGDs will (more or less) cancel each other out.

European banks are now more properly accounting for defaults, thanks in part to a new-and-improved DoD that recognizes ancient missed payments. But the architects of the revised DoD also built a bit of flexibility into the system – preventing a potential tsunami of defaults amid COVID-19.

The new DoD allows for one exemption to the revised day-counting practice: if a bank agrees a new payment schedule with a client, a loan’s days-past-due are counted based on that new schedule. This is an important exception because, during the pandemic, regulatory-driven moratoria gave clients of European banks more time to repay their loans. If the exemption in the new DoD didn’t exist, these so-called payment holidays wouldn’t be recognized, and many more loans would have been in default because of missed payments that were 90 DPD.

Going forward, European banks will face many obstacles, including stress-testing revisions and Basel III reforms. But the transition to a superior DoD and the recalibration of PD and LGD models will enable them to be more prepared for future challenges.