Will the Housing Bubble Pop or Fizzle?

Risk managers need to analyze trends in a changing real estate market, but what models should they use and what are the key factors they need to consider?

The Federal Reserve’s sudden pivot towards tightening monetary policy this spring has sent interest rates skyward and stock investors to their bunkers. After the sharp run up in real estate prices both in the U.S. and abroad, how should real estate investors and risk managers prepare themselves? Will housing values slow, crash or flatten? Moreover, how can we use new data series to differentiate regional risks?

After years of pedestrian growth in the wake of the mid-2000s housing bubble, house prices went parabolic in 2020, growing over 30% in the span of the last two years, according to the Moody’s Analytics House Price Index.

The causes are both structural and cyclical. Demographic trends supported increased demand as the millennial generation entered their thirties, prime years for starting families and buying homes. Simultaneously, baby boomers showed no signs of downsizing and have instead increased demand for second homes and investment properties as they look forward to retirement.

On the supply side, on the other hand, home building capacity has been slow to increase after years of underinvestment. Supply-chain constraints on building materials, such as lumber and labor shortages due to COVID-19 infections, have combined with zoning restrictions to further weigh on the ability of builders to construct more homes.

In addition, demand was pulled forward by record-low interest rates. Aggressive monetary easing by the Federal Reserve caused interest rates on 30-year fixed rate mortgages to plunge below 3% during the pandemic.

Some buyers rushed into the market, attracted by the cheap financing or the need for more space for remote work and learning during the pandemic, while others turned to real estate as an alternative (or a supplement) to the paltry returns offered by savings accounts and bonds.

All of these forces conspired to create a large imbalance between supply and demand, sending vacancy rates to near-record low levels.

We can leverage an error-correction model to assess the magnitude of potential over- or under-valuation that exists in the housing market today. These two-stage models are common in the valuation of assets, given their intuitive theoretical basis.

In the first stage, we estimate the fundamental value of housing based on relationships such as the price-to-income or price-to-rent ratio, similar to how stock pickers use price-to-earnings ratios to assess the intrinsic value of equities. (As discussed in a recent webinar, the U.S. real estate market is estimated to be approximately 20% overvalued.)

In the second stage, we estimate the parameters for a dynamic adjustment equation based on factors such as momentum and interest rate movements. That is, what is the speed and trajectory home prices are likely to take to restore the equilibrium from the first equation? Will prices, moreover, jump back to their equilibrium values or will they gradually adjust?

Based on current factors, we expect prices to trend sideways to allow incomes to catch up with prices. Although rising interest rates will affect affordability and slow cyclical demand, the demographic wave will move demand in the opposite direction. While the process may appear orderly at a national level, some regions will undoubtedly face sharper declines than others – particularly those that have experienced a dramatic run-up in prices relative to incomes recently. 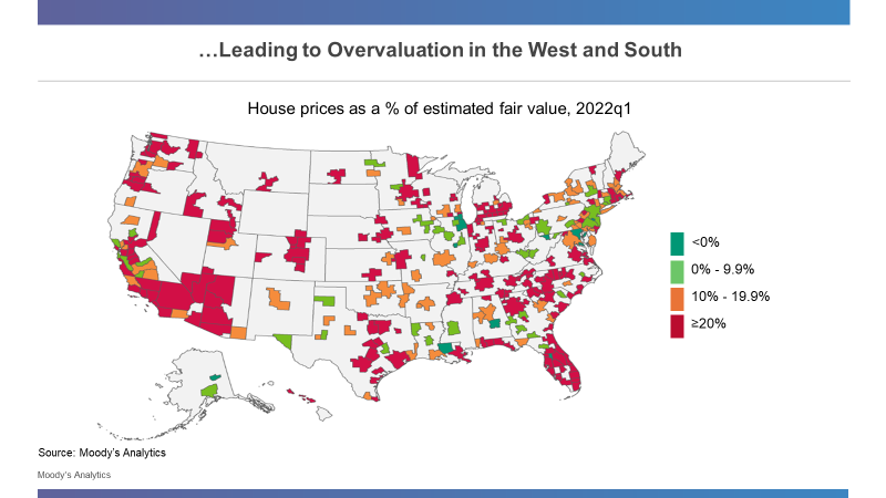 While overvaluation models are useful devices for establishing a framework to detect housing bubbles, they may fail to capture recent shifts in preferences. For example, if more households now wish to have second homes or larger homes because of a shift to remote work, then the equilibrium relationship between prices and incomes may shift upward, cutting into our estimation of overvaluation.

What’s more, overvaluation is a necessary but insufficient condition for a market correction. To drive prices meaningfully downward in a short span of time requires speculation and leverage.

While the U.S. housing market has experienced a sharp increase in the number of investors recently, they have been primarily focused on buying or renting rather than flipping or selling properties in a short period of time, as occurred during the mid-2000s housing bubble. Provided demand for rental units remains high, these investors are unlikely to sell their properties en masse, even if prices should start to weaken.

Furthermore, homeowners have much more equity and far less leverage today than they did during the mid-2000s bubble. Foreclosures, suppressed by government actions during the pandemic, are destined to rise in coming months – but should still remain low, given the strength of the labor market and mortgage lending standards. With reduced leverage and a strong credit profile, few homeowners will experience the need to sell their homes if price appreciation should slow or decline, preventing a sharp correction.

Putting it All Together

Risks to the housing market are rising but remain low, because of the strength of demographics and household balance sheets. While investors should tread carefully in deploying new capital, the risk of price depreciation to existing homeowners and lenders remains low in the short term, provided the broader economy does not experience a deep recession.

Longer-term prospects are not as bright, considering expectations for slower population growth and the eventual home downsizing by baby boomers. The pace of new construction is expected to slow along with home price appreciation (at the national level), although demand will remain robust in certain areas. Local markets with strong economic prospects will continue to thrive while less attractive areas decline, much like the recent experience of many European countries with aging populations.

Actions have consequences. Federal Reserve decisions during the pandemic prevented the economy from slipping into a worse recession or even a depression. Scientists, meanwhile, successfully brought effective COVID-19 vaccinations to market far sooner than many experts thought was possible.

The inflation we are experiencing today is the result of these successes. Eventually, higher prices stemming from supply-chain issues will cure themselves with improved production and demand destruction.

However, the Fed cannot wait for markets to correct, given the specter of self-fulfilling expectations propagating a wage-price spiral. If the Fed’s low rates propelled the housing market to record highs, it stands to reason that rising rates will cause the market to slow considerably.

Slowing and crashing, of course, are two different outcomes. Given shifts in both supply and demand since the mid-2000s housing bubble, there are reasons to believe that “this time is different.” Risk managers would be wise to allow for the strong possibility of a housing slowdown, while also ensuring that they are prepared for a less-likely crash.

Cristian deRitis is the Deputy Chief Economist at Moody's Analytics. As the head of model research and development, he specializes in the analysis of current and future economic conditions, consumer credit markets and housing. Before joining Moody's Analytics, he worked for Fannie Mae. In addition to his published research, Cristian is named on two US patents for credit modeling techniques. He can be reached at cristian.deritis@moodys.com