To predict bank credit losses more accurately, in an environment of high inflation, falling output and rising interest rates, risk managers need to have a thorough understanding of diverging trends in consumer spending.

American consumers are the main pillar of support for both the U.S. and global economies. Indeed, in the current environment of restrained business investment and constrained government finances, consumer spending is the last bulwark between a slowing economy and a deeper recession.

Understanding the financial health of households and their future spending patterns is therefore critical for forecasting both credit losses and the broader economy.

Aggregate consumer spending has been surprisingly resilient in the face of high energy prices and the low level of confidence expressed across consumer sentiment surveys. Given the high level of pessimism, consumers would be expected to hunker down, cut back their outlays, and increase saving in anticipation of an economic downturn. On the surface, though, it would appear they are throwing caution to the wind, with inflation-adjusted spending rising at a healthy 1.9% rate over the past year.

While that statistic is encouraging, a deeper look into the spending, saving and income data reveals that there are three distinct groups of households operating in the U.S. economy, with vastly different behaviors and sensitivities to inflation. Given these differences, decomposing the aggregate spending figure is critical to obtaining an accurate forecast.

To understand why this is true, let’s take a quick look at an obscure mathematical theorem developed by a Danish mathematician in 1906.

One of the most important – but perhaps little known – mathematical axioms for managing risk is Johan Jensen’s inequality. A formal proof is available, but, in a nutshell, it posits that the convex transformation of a mean is less than or equal to the mean applied after a convex transformation. 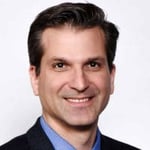 To illustrate, consider a simple model where future credit losses on a portfolio are assumed to equal the unemployment rate squared times 10. Suppose there are three possible states of the world where unemployment is equal to 3%, 6% or 9%, with corresponding losses of 0.9%, 3.6% and 8.1%, and a mean loss rate of 4.2%. An inexperienced risk manager might consider estimating credit losses by inputting the average unemployment rate of 6% into the model, but this would yield 3.6% – grossly understating the expected loss rate and potentially underpricing the risk.

Jensen’s inequality is particularly relevant for our analysis of consumers today, given the increased polarization of wealth coming out of the pandemic and the disproportionate impact that high inflation and high interest rates have on lower-income versus higher-income households. Focusing solely on averages or aggregates in this environment may lead us to incorrect credit risk conclusions.

The View from the Top

Data on liquid savings best illustrates the stark differences in the financial position of households. As of the second quarter of 2022, the top 40% of households in the U.S. reported cash and checkable deposits of close to $4 trillion – nearly 390% higher than they held at the end of 2019, before the COVID-19 pandemic. While rising costs for energy food and other goods and services affect all households, this group has a substantial financial cushion to offset inflationary pressures.

As a result of their increased wealth, higher-income households have continued to increase their discretionary spending, even as gas prices have risen. Travel spending (including airfare) has fully recovered from its pandemic lows, as has spending at restaurants and on luxury goods.

Provided stock markets and home prices don’t collapse, this group is expected to continue to grow its spending at a robust pace, with a shift back toward services – including recreation, medical care and travel. Most of the projected 2% growth in holiday spending this year will come from the top 40% of households, which typically account for 60% of overall spending.

Savings data for the bottom 20% of the U.S. households tells a much different story, with this group experiencing a 75% reduction in their cash and checking account balances (see chart, below) since the start of the pandemic. 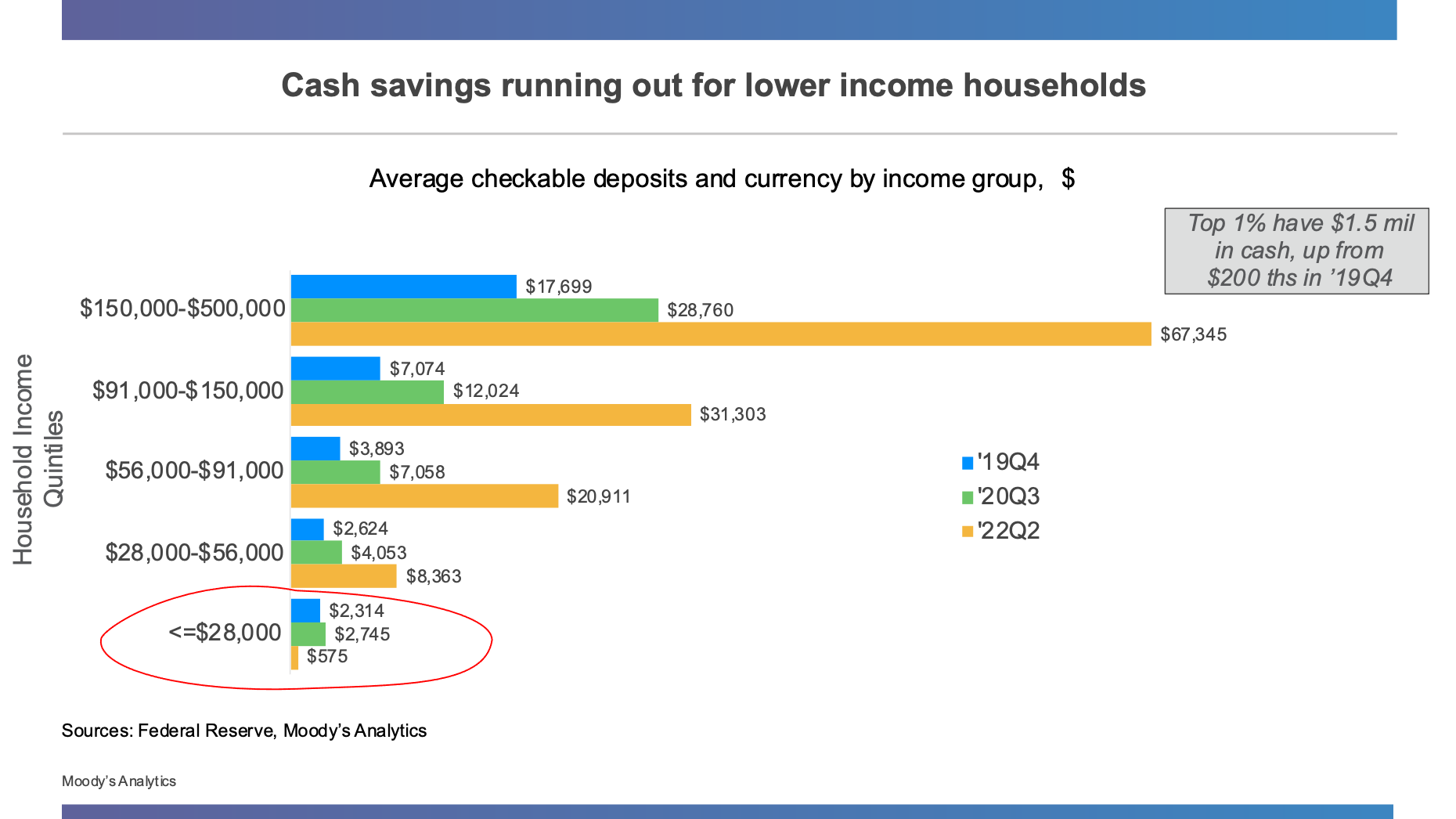 Higher prices have hit lower-income households particularly hard, as they tend to rent rather than own their homes, work in jobs that require commuting, and spend a disproportionate share of their incomes on gas, food, shelter and utilities.

In addition to dipping into their savings, households in this group are increasingly turning to credit cards and personal loans to supplement their incomes. Even with overall prices expected to moderate over the coming year, this group is expected to continue to focus on necessities and favor shopping at discount stores, as higher interest rates take an increasingly larger bite out of their incomes in the form of monthly debt payments.

While wage growth has risen faster for lower-wage jobs, the increases haven't been large enough to keep up with inflation. The deep discounts offered by retailers flush with too much inventory may attract some buyers, but, given the size of the financial pressures they face, holiday sales will likely be lower for this group in both nominal and inflation-adjusted terms.

The middle 40% of households straddles the other two groups, both in terms of financial strength and behavior. On average, like their higher income peers, they have significantly more cash savings than they did prior to the pandemic. However, like their lower-income peers, they also have less flexibility to change their spending patterns in the face of rising prices.

Given concerns about the future of the labor market, this group is likely to increase its holiday spending only modestly over last year’s level – translating into a small decline in inflation-adjusted terms. While most middle-income households own their own homes and have locked in record-low mortgage rates, they tend to carry a significant amount of variable-rate credit card debt, which will curb their ability to spend as interest rates rise.

For portfolio managers, this middle group is often the most difficult to predict or manage. A mild recession that doesn't include many layoffs would be uncomfortable, but would also be unlikely to lead to a large increase in defaults or delinquencies. However, an extended period of inflation, combined with even a modest increase in unemployment, would push a number of borrowers over the edge.

The current environment is challenging to forecast, as it combines a number of post-pandemic structural changes and shifts in consumer preferences with cyclical economic headwinds, such as high inflation, falling output and rising interest rates.

The labor market remains the key determining factor to the health of the consumer. Strong monthly job growth, combined with a near-record level of job openings, supports the optimistic view that slowing economic activity may not lead to a significant rise in layoffs. However, reports of cutbacks at businesses (particularly large technology companies) and global economic weakness suggests that another shoe may be yet to drop.

The situation emphasizes the need for risk managers to maintain both macro and micro views of their customers and the broader industry. This is no simple task, but a necessary one to avoid being blindsided.

While a slowing economy is never welcome news, recessions can wring out excesses and create a foundation for future growth. Risk managers will want to prepare their organizations for these opportunities as they appear, recalling that some of the best performing loans – and businesses – were originated in some of the weakest economic environments.

Cristian deRitis is the Deputy Chief Economist at Moody's Analytics. As the head of model research and development, he specializes in the analysis of current and future economic conditions, consumer credit markets and housing. Before joining Moody's Analytics, he worked for Fannie Mae. In addition to his published research, Cristian is named on two U.S. patents for credit modeling techniques. He can be reached at cristian.deritis@moodys.com.