Under IFRS 9, European banks today face a steep increase in their loan-loss provisions if it is determined at the time of financial reporting that their loans present a “significant increase in credit risk.” What is SICR, why is it difficult to assess, and does guidance provided by regulators like the ECB offer any solutions?

In these volatile and unpredictable times, European banks continue to face a major obstacle in their efforts to comply with the IFRS 9 accounting standard for expected credit losses (ECL): assessing the transition from “Stage 1” to “Stage 2” for loans.

A loan has to be transitioned from Stage 1 to Stage 2 under IFRS 9 when it shows a “significant increase in credit risk” (SICR) from the time it is initially recognized. Stage 2 status requires a bank to make a steep increase in its loss provision for a loan, because it calls for the calculation of ECL over the lifetime of the asset – as opposed to estimating the expected loss over a 12-month period (Stage 1).

Today, as a result of the downscaling of the pandemic-driven support programs (e.g., government aid for borrowers) and rising inflation and interest rates, it has become a greater challenge than ever to compute ECL – partly because it is no small task to determine whether a loan meets the SICR criteria for a shift to Stage 2. SICR rules are provided in both the IFRS 9 standard itself and in guidance offered by both the European Central Bank (via its asset quality review) and the Basel Committee on Banking Supervision (BCBS).

There’s a lot of crossover in the SICR guidance provided by IFRS 9, the BCBS and the ECB. For example, all agree that there is one key backstop indicator for a transition from Stage 1 to Stage 2: when a loan is more than 30 days past due (>30DPD). They further concur that determination of a Stage 2 transition must be performed on a holistic basis and must include forward-looking triggers.

But the ECB differs from the other two in its recommendation that a loan should be transitioned from Stage 1 to Stage 2 if its probability of default (PD) increases by threefold – or 200%. Does this second backstop make sense or is it unnecessary, considering the internal and external SICR triggers that are already in place? Let’s take a look.

Coherent Guidance from IFRS 9 and the BCBS

Before delving further into the ECB’s PD increase backstop, it’s logical for us to first discuss well-established SICR indicators from IFRS 9 and the BCBS. In addition to the “>30DPD” indicator and the holistic analysis guidance, the indicators banks should be looking for when evaluating a Stage 1 to Stage 2 transition include the following:

Overall, the above is a broad set of criteria; for a basic level of comparability, there’s the backstop rule (>30DPD).

Breaking Down the ECB’s “Threefold Increase in PD” Guidance

The ECB started expanding its rules around SICR in 2018. According to this framework, there is not one backstop for the Stage 1 to Stage 2 IFRS 9 transition, but four. In addition to the “>30DPD” indicator, the ECB recommend a transition to Stage 2 when (1) there is a threefold increase in PD; (2) 12-month PD exceeds 20%; or (3) a loan achieves watchlist status, and is flagged as forborne or subject to restructuring.

The ECB adds that these triggers apply only to loans with a PD larger than 0.3%. Overall, the ECB guidance aligns with the internal indirect indicators of the IFRS 9 standard and the Basel ECL guidance, but there’s one important difference: the threefold increase in PD, if the PD is above 0.3% or below 20%.

For most risk professionals, the word “significant” in SICR has a statistical connotation. A significant increase refers to a new level of a variable that is significantly above its previous position, taking into account the uncertainty of the measurement.

We see no such underlying reasoning for the ECB’s “threefold increase in PD” backstop measure. Indeed, it does no not seem to be well-reasoned.

In the figure below, we show a typical exponential PD curve for 14 performing rating grades. 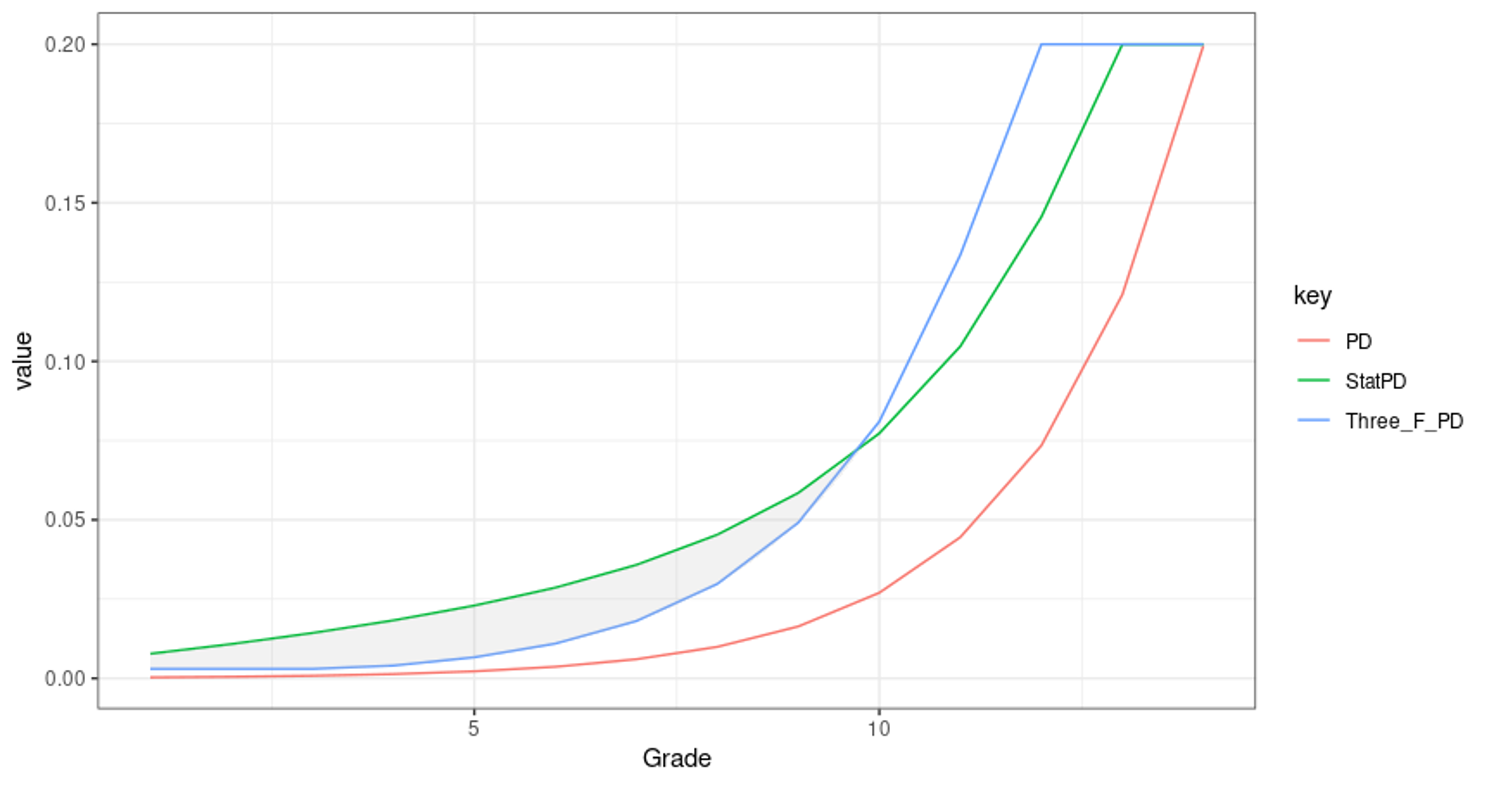 The blue curve in the graph shows the ECB backstop measure (three times PD, from 0.3% until the plateau at 20%). The green curve (“StatPD”), in contrast, shows a backstop that is based on a statistical approach, using a beta distribution.

The green curve is fundamentally different from the blue one. For low original PDs, it will trigger less often a Stage 2 transition, given that it allows for a statistical uncertainty. The cross-over point is near the ninth grade of the rating system. After this point, the green curve is below the blue one. In this region, the “threefold PD increase backstop measure” requires absolute PD swings that are so large that one can question its effectiveness as backstop.

The most problematic area is for loans with reasonably low original PDs that are now increasing due to the shifts in the macro-environment, such as rampant inflation and declining post-COVID government-support programs. The PDs of these obligors are increasing and will end up in the gray area of the chart, where a stage transition is triggered according to the ECB's "threefold increase in PD" backstop; their PDs end up above the blue curve, but below the green curve, in accordance with a statistical definition of SICR. This area is shaded in grey in the graph.

IFRS 9’s SICR requirement adds a layer of complexity to European banks’ assessment of credit risk for their financial assets – particularly loans. But they now have sufficient guidance to help them determine whether a loan needs to be transitioned from Stage 1 to Stage 2.

Clearly, internal and external (forward-looking) triggers need to be part of a bank’s IFRS 9 policy to define the transition to Stage 2. Moreover, there is the well-established >30DPD backstop.

On the other hand, the ECB’s “threefold increase in PD” trigger does not seem useful in practice. When interpreting “significant” in a statistical way, it is certainly not.

Dr. Marco Folpmers (FRM) is a partner for Financial Risk Management at Deloitte the Netherlands. He wishes to thank Shirley Edwards, manager at Deloitte FRM, for reviewing an earlier draft of this contribution.