Thanks to escalating inflation and changing monetary policies, the chances of another dramatic downturn have grown significantly. To determine the odds and potential severity of the next recession, and to mitigate their risks, financial institutions must understand inflation psychology and keep an eye on key economic indicators.

Consumer price inflation is rising at rates we haven’t seen since the early 1980s. The odds of a recession, moreover, have increased considerably, with central banks focusing all their attention on getting prices down – even at the cost of growth and higher unemployment.

The abrupt shift in monetary policy brings three key questions into focus: How can we handicap the probability of a recession in the next year? What are the economic indicators that can tell us if a recession is imminent? And how severe will the next recession be when it eventually comes?

Every business cycle is different, and the causes of recession are rarely – if ever – the same. The current economic cycle is defined by the COVID-19 pandemic, which triggered an exogenous supply shock.

The recession that followed was unique not only in in terms of its severity (with lockdowns leading to an annualized contraction in U.S. output of over 30% and an increase in unemployment to nearly 15%) but also in terms of its breadth, with every country experiencing a contraction simultaneously. This is extremely rare. Typically, business cycles are asynchronous, with some countries continuing to grow while others work through recessions. 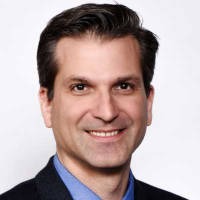 Equally impressive was the coordinated monetary and fiscal responses employed to prevent the COVID Recession from turning into the COVID Depression. It's never easy to estimate what might have occurred had we taken a different path, but several studies suggest that a decline unlike any experienced since the Great Depression would have occurred without governmental and central bank support.

While the responses highlighted the very best that government has to offer in a time of crisis, in a sense the stimulus worked too well. Vaccines were developed and distributed much faster than virologists had anticipated using new mRNA technology, and a tidal wave of expected defaults and bankruptcies was avoided thanks to government support and loss mitigation efforts. Businesses, moreover, adapted to lockdown orders with relative ease, and entrepreneurs seized on new opportunities more rapidly than economists imagined.

As a result, the reopening of the economy occurred much faster and was much stronger than anyone anticipated. (Remember when analysts were contemplating a U-, L- or W-shaped recovery? It turned out to be more of a V or checkmark shape.)

Demand roared backed so swiftly, in fact, that the supply side was caught off guard. For example, auto manufacturers, anticipating an extended period of weak demand, canceled orders for semiconductors and other parts early in the pandemic. Restarting production therefore turned out to be far more difficult, due to transportation bottlenecks and the increased demand for goods over services.

The Psychological Impact of Inflation

The consequence of the success in addressing the COVID Recession is today's inflation. While improving supply chains and moderating consumer demand will naturally bring down inflation over time, the risk now is largely psychological. If households, businesses and investors expect that inflation is here to stay, they will change their behaviors in ways that further exacerbate inflation risks, triggering a wage-price spiral.

Recent data on the spread between nominal and inflation-protected Treasury securities confirm these fears and justify the hawkish stance adopted by the Federal Reserve and other central banks. The 5-year breakeven rate for inflation (which now sits at roughly 3.3%) suggests that investors believe that inflation won’t be returning to the Federal Reserve’s 2% target anytime soon.

The added stress on energy prices caused by the Russia-Ukraine military conflict further complicates the Fed’s options, increasing the odds that it will make a mistake and either slow the economy too aggressively or fail to control prices quickly. 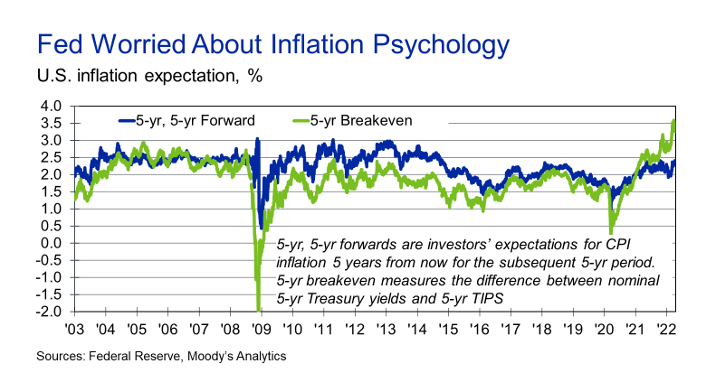 A saving grace is that U.S. economic fundamentals are strong, with robust household balance sheets, corporate profits and bank capitalization ratios. Consequently, there is some financial cushioning to absorb the effects of rate hikes.

While another recession isn’t a certainty, the risks are rising. Based on Moody’s Analytics econometric models incorporating both financial and economic data, there is now a 35% chance that U.S. economy will enter recession within the next 12 months, up from 10% at the start of the year. The odds are even higher for European economies (given their direct ties to Russia and Ukraine), while export-oriented economies in Asia, Africa and Latin America are vulnerable to global weakness, despite increases in commodity prices.

Figure 2: Projecting the Next Recession 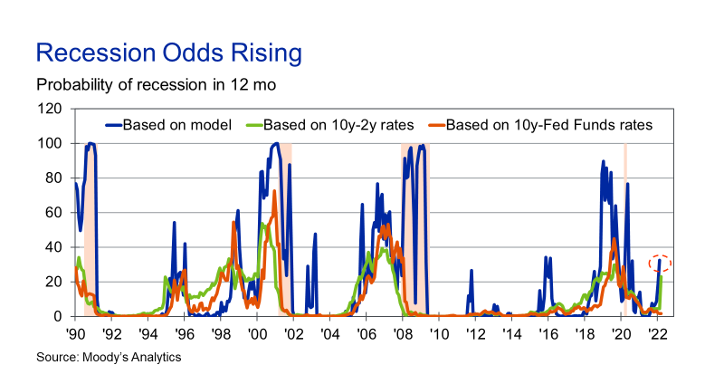 Four key economic indicators can be used to determine whether a recession is imminent:

Nobody enjoys recessions, but they are a fact of economic life. While the effect of higher unemployment falls disproportionately on lower income households, so too do the costs of higher inflation. With a bit of luck, central banks will be able to fight the latter while doing minimal damage to the former, as they seek to unwind all the stimulus that has been injected into the economy.

There is good reason to believe this is possible, provided there are no additional shocks. Strong economic fundamentals will help cushion the blow of higher interest rates.

While some households and businesses would face economic hardship, a recession would help to ring out excesses in home prices, equity values and commodity markets, while putting the economy on a more sustainable trajectory. On the other side of recession, opportunities would open for first time homebuyers and entrepreneurs who are currently locked out of opportunities to either buy a home or start a business.

Risk managers will want to pay special attention to inflation psychology in the current environment by monitoring confidence surveys and bond spreads. Shifts in consumer expectations will determine the trajectory of spending and labor market participation; moreover, they will play a significant role in determining future monetary policy and the likelihood of a recession, given stagflation risk.

The bottom line is that while recession risks are rising, a recession isn't guaranteed. In the event there is a recession, it's likely to be shallow and short, considering the strength of economic fundamentals. Though recessions do inflict short-term pain, they also create new opportunities for longer-term growth.

Cristian deRitis is the Deputy Chief Economist at Moody's Analytics. As the head of model research and development, he specializes in the analysis of current and future economic conditions, consumer credit markets and housing. Before joining Moody's Analytics, he worked for Fannie Mae. In addition to his published research, Cristian is named on two US patents for credit modeling techniques. He can be reached at cristian.deritis@moodys.com.