How did European banks respond to the risk management worries of the COVID-19 pandemic, and should we be concerned about their approach to current conditions like inflation and geopolitical risk?

In October, two regulatory studies of great interest to credit risk managers were published: the Basel Committee on Banking Supervision’s (BCBS) paper on buffer usability and procyclicality, and a European Central Bank (ECB) bank lending survey. Interestingly, the regulators came to very different conclusions about the current state of the credit risk market.

What were the most important findings of the BCBS and ECB reports? Moreover, what are the key takeaways for risk managers? To answer these questions, we first need to consider the risks the regulators analyzed and the processes they used.

Through the BCBS paper, we can draw important lessons on how this standard-setting committee perceives the underlying dynamics of bank’s capital and systemic stability. Its backward-looking analysis was thorough, but it did not issue any warnings or recommendations about credit risk – and its conclusions are not concerning.

Let’s now take a closer look at each report.

The BCBS paper on buffer usability and procyclicality in the Basel III framework discusses how the accord’s capital requirements system worked during the Covid-19 crisis. It also weighs in on the effectiveness of the Basel III countercyclical capital buffer (CCB) and offers an analysis of the usability of the liquidity buffer. It rounds out with an assessment of the efficacy of the IFRS 9 expected credit loss (ECL) framework.

The report found that, with the help of government support (which assisted with the absorption of shocks), banks’ acted consistently, maintained proper capital levels and did not drastically alter their behavior amid COVID-19. Indeed, banks’ appetite for lending – and, thereby, for supporting the real economy – was not severely impacted by the pandemic, the BCBS found.

One emphasis of the report was the need during a crisis for “capital headroom” – i.e., banks must take steps to ensure that their available capital is amply in excess of the capital requirement in volatile times.

The good news is that, when banks have sufficient headroom (as they mostly did during COVID-19, according to the BCBS), they do not typically restrict their lending. On the other hand, banks that do not have sufficient headroom have to restrict lending, particularly when RWA-based capital ratios threaten to descend below their thresholds. These banks also must consider the “parallel buffer requirements,” such as the unweighted leverage ratio. 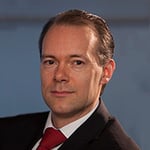 Banks, according to the BCBS, may be unwilling “to dip into their capital buffers” during downturns for three reasons: (1) they are uncertain about future losses that will need to be absorbed; (2) they fear supervisory constraints to their capital distributions; or (3) they want to avoid the market stigma of a drawdown on their buffers.

Regarding the CCB, the BCBS report said its impact is more difficult to analyze than other aspects of Basel III, partly because it is the only “time-varying buffer component” in the capital stack – which essentially means that it can be adjusted in response to evolving market conditions.

Through Basel III, the BCBS grants local regulators the power to increase this requirement to a maximum of 2.5% during a business cycle’s peak – and also to reduce it to 0%, when needed. However, since not all jurisdictions regulate the CCB in the same way, its effectiveness as a shock absorber during a crisis period is difficult to determine.

Overall, the BCBS concludes that the CCB didn’t have any real impact on levels of lending amid COVID-19. If a bank has ample headroom, the regulator elaborated, the fluctuations of the CCB requirement are too small to have a noticeable impact on lending volumes.

In its review of liquidity risk treatment during COVID-19, the BCBS found that banks, on the whole, were not reluctant to use liquid-asset buffers. The regulator additionally determined that IFRS 9 provisions had less impact on credit risk during the pandemic (where there was “little sign of procyclicality”) than Basel III. The same is true for market risk, operational risk and interest rate risk in the banking book, according to the BCBS.

The underlying theme of the BCBS paper is that if banks heed supervisory guidance and work toward ample capitalization before a crisis, then they’ll have the excess capital needed to avert a potential financial disaster; moreover, under that scenario, procyclical behavior would be avoided and lending practices would continue to flourish. That’s essentially what happened during COVID-19, the BCBS concluded.

The ECB’s analysis of credit risk at European banks was significantly different from the findings of the BCBS. It’s survey of bank executives found clear evidence that, in response to current risks, banks are actually tightening their credit standards. This will likely have a negative impact on the real economy.

Whereas the BCBS report looked back at COVID-19, the ECB used forward-looking indicators to peer ahead, incorporating geopolitical risk, increasing interest rates, rampant inflation, and the disruption of supply chains.

The results reported by the ECB in the October 2022 bank lending survey relate to changes observed during the third quarter of 2022 and expectations for the fourth quarter of 2022. (The survey itself was conducted between September 16 and October 4.) One of the forward-looking questions respondents were asked was how they expected the credit standards of their bank – with respect to “approval of loans or credit lines to enterprises” – would change over the next three months.

The ECB wanted to find out how strict European banks expected to be with these standards, via their credit approval process. Calls for an alarming increase in tightening of credit standards across European banks were, in short, the end result of this line of questioning. Ultimately, this could yield a significant drop-off in lending.

In the graph, one can see that the percentage of credit standards tightening was expected to increase across all areas from the second quarter through the fourth quarter – whether we’re talking about long-term loans or short-term loans, or whether the loans were being issued by large enterprises or by small and medium-sized enterprises (SMEs). The projected increase was particularly dramatic for SME loans, where the percentage of expected tighteners doubled in the October to December period. 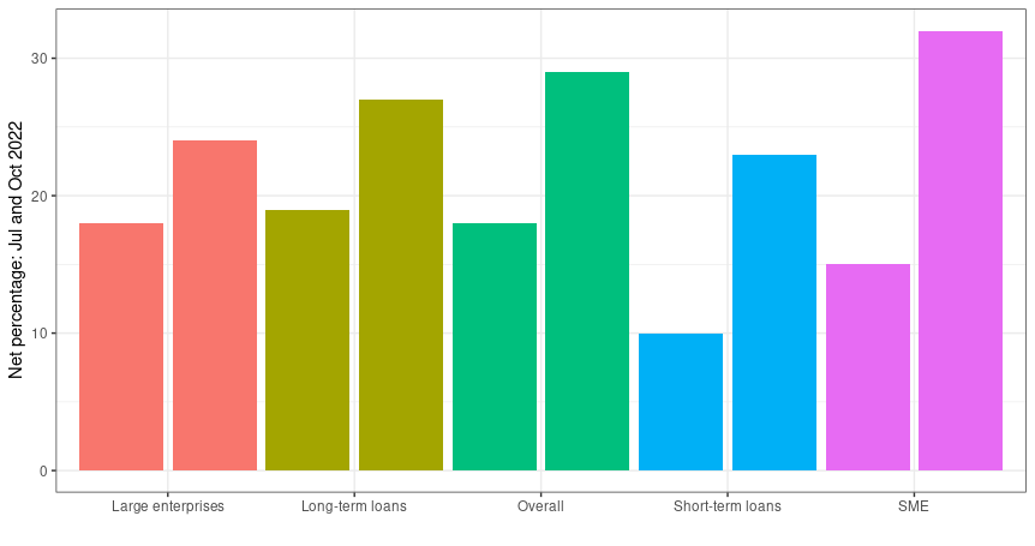 One can logically deduce (from Figure 2) that EU banks plan to tighten their credit risk standards considerably in the fourth quarter of 2022.

The recent BCBS and ECB reports came to very difficult conclusions about the current state of credit risk management at European banks.

After examining capitalization dynamics across European banks during the pandemic, the BCBS found that COVID-19 did not reduce banks’ lending activity to the real economy, with the exception of a small group that already had low capital headroom. What’s more, it concluded that while banks were generally unwilling “to dip into their buffers” amid the crisis, government-support programs helped absorb the shocks of COVID-19, further strengthening banks’ lending.

In summary, the BCBS report found that no urgent action was needed to mitigate banks’ current credit risk, and it therefore offered no policy recommendations.

The ECB study, in contrast, examined current threats to banks (including inflation risk and geopolitical tensions), and looked ahead with the help of survey data it collected on the expectations of financial risk managers at EU banks.

While the ECB data was less concrete than the historical data the BCBS used for its regression analyses, it provided a more pertinent assessment of future risks. What’s more, it illuminated the credit standards tightening that is expected in the fourth quarter of 2022, and that will likely continue next year.

Both types of analysis are useful. The BCBS should be commended for its efforts to evaluate bank behavior during COVID-19 and to break down the pandemic’s impact on financial risks quantitatively. But this type of analysis is backward looking by definition, and needs to be supplemented by forward-looking indicators. That’s why the survey results offered by the ECB are also extremely valuable.