Expectations for Inflation and Interest Rates: 2022 and Beyond

The current inflationary environment has impacted organizations in significant ways and created a range of challenges for financial risk managers. To better understand how risk managers and their firms have been and expect to be impacted by inflation, GARP surveyed over 350 Financial Risk Managers (FRM®) across the globe for their current outlook. The survey asked participants to report on several important issues, including expectations for inflation and interest rates in 2022 and beyond; adjustments to models and scenario analysis or stress tests going forward to accommodate higher inflation; the usefulness of derivatives to hedge inflation risk directly or indirectly; and the impact of inflation on liabilities.

Respondents expect the annual inflation rate to remain high in U.S., U.K., and EU followed by a significant reduction over the next 5 years. The 2027 expected inflation rates for these areas are all at or above 3% — greater than the inflation targets typically used by the Federal Reserve, Bank of England, and European Central Bank. Inflation in China and Japan is expected to remain stable through 2027 around 3% and 2%, respectively. 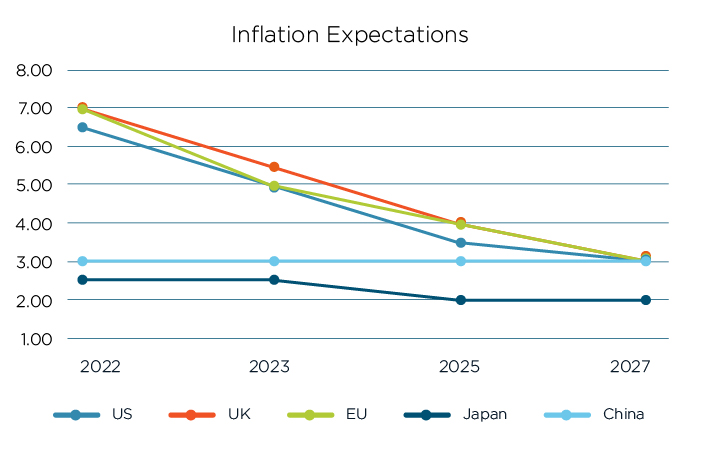 FRMs were also asked about their expectations for key central bank policy rates, namely: U.S. Fed Funds Rate, U.K. Bank Rate, EU Main Refinancing Rate, Japan Overnight Call Rate, and China One-Year Loan Prime Rate. Respondents expect these key short-term interest rates to rise through the remainder of 2022, climb further in 2023, and remain elevated over the next five years. The U.S. Federal Funds Rate, for example, is anticipated to end 2022 at 2.5%, rise to 3% in 2023, and fall only to 2.25% by the end of 2027. 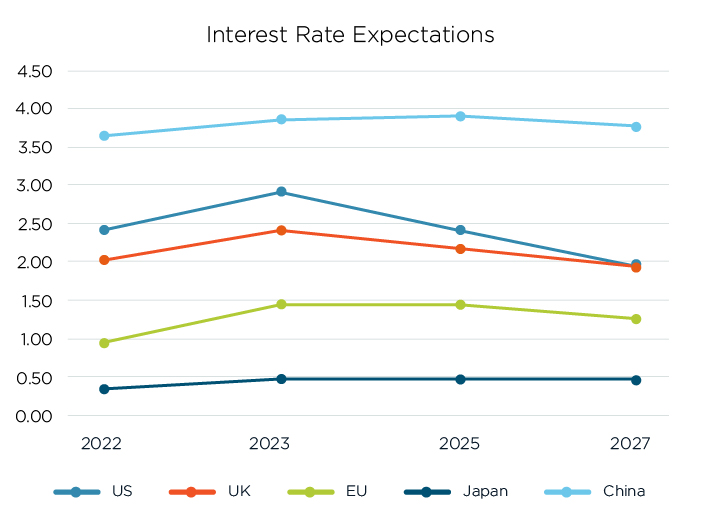 Notably, the EU’s Main Refinancing Rate, which has been maintained at 0% since 2016, is expected to grow significantly by the end of 2023 and remain elevated over the next five years. In contrast, the One-Year Loan Prime Rate in China is only expected to grow slightly from its current level: 3.7%.

For roughly a quarter of respondents, inflation has had a large or very large impact on their firm’s asset allocation while for the majority the impact has been moderate. A similar story is seen regarding inflation’s impact on new business.

Respondents indicated that the impact of inflation and interest rates on their firm’s liabilities differed depending on the coupon structure of the liabilities, with fixed-rate debt experiencing a positive impact while variable-rate debt experienced a negative impact. This likely reflects the reality that the value of fixed rate obligations will decline with rising interest rates, reducing liabilities on the balance sheet, while higher floating-rate coupon payments can drain a firm’s cashflow. 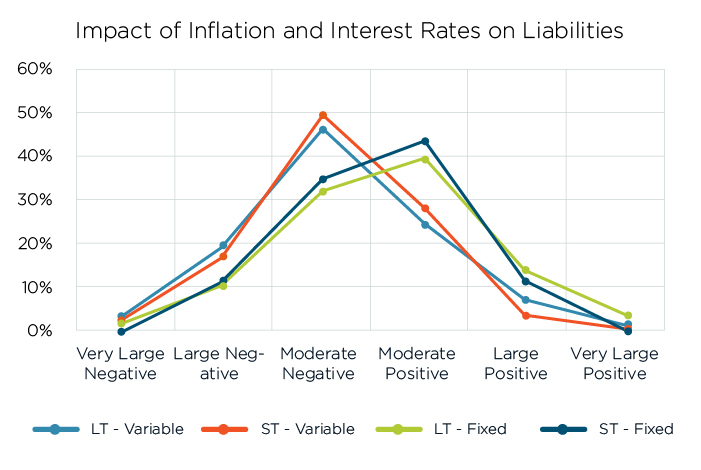 Respondents were asked to rank risk factors from 1 to 5 in terms of the severity they pose to their organization over the next year, with 1 being negligible risk and 5 being the highest risk. The following table displays the percentage of respondents that rated that factor as high risk (4 or 5), ranked from highest to lowest for the whole group, as well as the results by region — the number of respondents for each region are shown in parentheses. The risk factor with the highest ranking and lowest ranking for each group is highlighted in red and green, respectively.

Over 350 FRMs participated in this survey, representing a broad, global swath of risk managers, financial services firms, and risk disciplines as shown via the respondent breakdowns below. 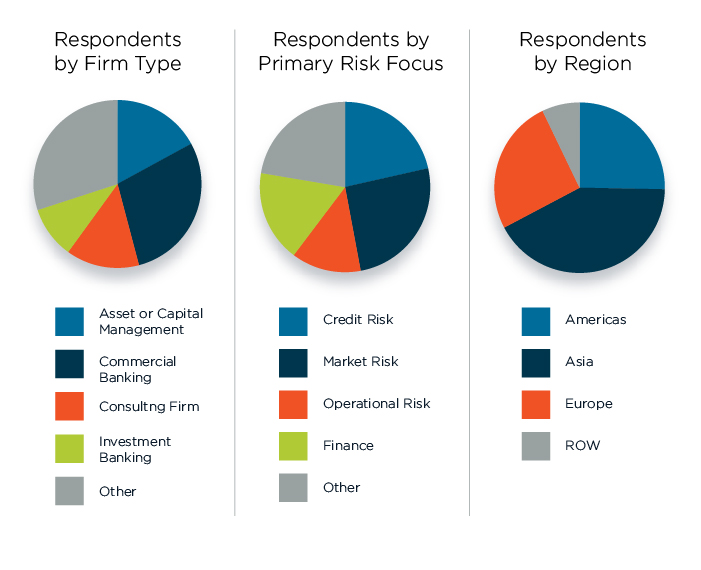 In addition, roughly two-thirds of respondents work at large firms (greater than 1000 employees), and more than 70% have more than five years of risk management experience.